Test of Hypotheses for Equality of Proportions of two Populations

TEST OF HYPOTHESES FOR EQUALITY OF PROPORTIONS OF TWO POPULATIONS

Step 1 : Let PX and PY denote respectively the proportions of Population-1 and Population-2 possessing the qualitative characteristic (attribute) under study. Frame the null hypothesis as H0: PX=PY and choose the suitable alternative hypothesis from

Here, these two samples are assumed to be independent.

. The approximate sampling distribution of the test statistic under H0  is the N(0,1) distribution.

Step 5 : Calculate the value of Z for the given data as z0 =

Step 6 : Choose the critical value, ze, corresponding to α and H1 from the following table

Step 7 : Decide on H0 choosing the suitable rejection rule from the following table corresponding to H1.

Step1 : Let PX and PY be respectively the proportions of self-employed people in City-1 and City-2. Then, the null and alternative hypotheses are

i.e., there is no significant difference between the proportions of self-employed people in City-1 and City-2.

i.e., difference between the proportions of self-employed people in City-1 and City-2 is significant. It is a two-sided alternative hypothesis.

The test statistic under the null hypothesis is

The value of Z for given sample information is calculated from 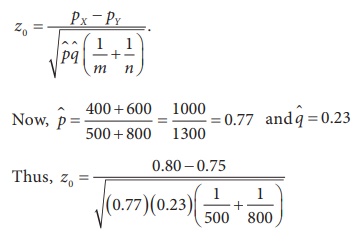 Since H1 is a two -sided alternative hypothesis, the critical value at 5% level of significance is ze = 1.96.

Since H0 is a two-sided alternative, elements of the critical region are determined by the rejection rule |z0| > ze. Thus, it is a two-tailed test. For the given sample information, ze = 2.0764 > ze = 1.96. Hence, H0 is rejected. We can conclude that the difference between the proportions of self-employed people in City-1 and City-2 is significant.