Frame the null hypothesis as H0: µX = µY and choose the suitable alternative hypothesis from

i.e., the above test statistic is obtained from Z considered in the test described in Section 1.11 by substituting SX2 and SY2 respectively for σX2 and σY2

The approximate sampling distribution of the test statistic

are respectively the values of

for the given samples.

Also, sx2 and sy2 are respectively the values of SX2 and SY2 for the given samples.

Step 6 : Find the critical value, ze, corresponding to α and H1 from the following table

A Model Examination was conducted to XII Standard students in the subject of Statistics. A District Educational Officer wanted to analyze the Gender-wise performance of the students using the marks secured by randomly selected boys and girls. Sample measures were calculated and the details are presented below:

Test, at 5% level of significance, whether performance of the students differ significantly with respect to their gender.

Step 1 : Let μX and μY denote respectively the average marks secured by boys and girls in the Model Examination conducted to the XII Standard students in the subject of Statistics. Then, the null and the alternative hypotheses are

i.e., there is no significant difference in the performance of the students with respect to their gender.

i.e., performance of the students differ significantly with the respect to the gender. It is a two-sided alternative hypothesis.

The test statistic under H0 is

Step 5 : Calculation of the Test Statistic 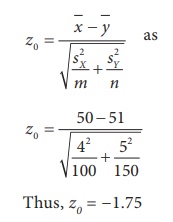 Since H1 is a two-sided alternative, elements of the critical region are determined by the rejection rule |z0| ≥ z0 . Thus it is a two-tailed test. But, |z0|= 1.75 is less than the critical value ze = 1.96. Hence, it may inferred as the given sample information does not provide sufficient evidence to reject H0. Therefore, it may be decided that there is no sufficient evidence in the given sample to conclude that performance of boys and girls in the Model Examination conducted in the subject of Statistics differ significantly.