The following example will help to understand this concept.

Suppose that a population consists of 4 elements such as 4, 8, 12 and 16. These may be considered as the values of a random variable, say, X. Let a random sample of size 2 be drawn from this population under sampling with replacement scheme. Then, the possible number of samples is 42.

In each of the 42 samples, the sample elements x 1 and x2 can be considered as the values of the two iid random variables X1 and X2. The possible samples, which could be drawn from the above population and their respective means are presented in Table 1.2.

Table 1.2 Possible Samples and their Means 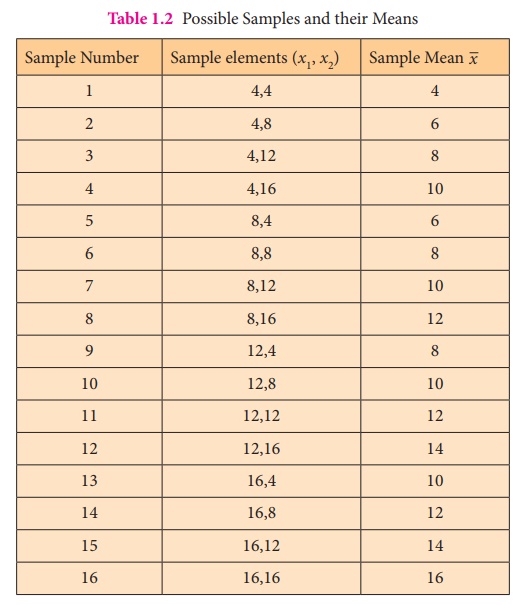 The set of pairs (x1, x2) listed in column 2 constitute the sample space of samples of size 2 each.

Hence, the sample space is:

The sampling distribution of

, the sample mean, is determined and is presented in Table 1.3.

Note 4: The sample obtained under sampling with replacement from a finite population satisfies the conditions for a random sample as described earlier.

Note 5: If the sample values are selected under without replacement scheme, independence property of X1, X2, ... Xn will be violated. Hence it will not be a random sample.

Note 6: When the sample size is greater than or equal to 30, in most of the text books, the sample is termed as a large sample. Also, the sample of size less than 30 is termed as small sample. However, in practice, there is no rigidity in this number i.e., 30, and that depends on the nature of the population and the sample.

are respectively the N(nμ, nσ2) and N(μ, σ2/n). These two distributions, in statistical inference point of view, can be considered respectively as the sampling distributions of the sample total and sample mean of a random sample drawn from the N(μ, σ2) distribution. The notation N(μ, σ2) refers to the normal distribution having mean μ and variance σ2.