Frame the null hypothesis as H0: µX = µY and choose the suitable alternative hypothesis from

are respectively the means of the two samples described in Step-2.

The approximate sampling distribution of the test statistic Z =

It may be noted that the test statistic, when

are respectively the values of

for the given samples.

Step-6 : Find the critical value, ze, corresponding to α and H1 from the following table

Step 1 : Let μX and μY be respectively the mean scores secured in the national level talent search examination by all the students from the districts D 1 and D2 considered for the study. It is given that the populations of the scores of the students of these districts have the common standard deviation σ = 2. The null and alternative hypotheses are

i.e., average scores secured by the students from the study districts are not significantly different.

i.e., average scores secured by the students from the study districts are significantly different. It is a two-sided alternative.

The test statistic under the null hypothesis H0 is

Since both m and n are large, the sampling distribution of Z under H0 is the N(0, 1) distribution. 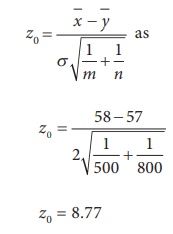 Since H1 is a two-sided alternative, elements of the critical region are defined by the rejection rule |z0 | ≥ z e = z0.025. For the given sample information, |z0| = 8.77 > ze = 1.96. It indicates that the given sample contains sufficient evidence to reject H0. Thus, it may be decided that H0 is rejected. Therefore, the average performance of the students in the districts D1 and D2 in the national level talent search examination are significantly different. Thus the given samples are not drawn from identical populations.