Substance abuse is the misuse of specific substances to alter mood or behavior; drug and alcohol abuse are two examples of sub-stance abuse.

Substance abuse is the misuse of specific substances to alter mood or behavior; drug and alcohol abuse are two examples of sub-stance abuse. Drug abuse is the use of drugs for other than legit-imate medical purposes. People who use drugs often take a variety of drugs simultaneously (such as alcohol, barbiturates, opioids, and tranquilizers), and the combination may have additive and addictive effects. IV/injecting drug users are at increased risk for HIV infection, acquired immunodeficiency syndrome (AIDS), and hepatitis B and are the most frequent victims of tetanus in the United States.

Clinical manifestations vary with the substance used, but the underlying principles of management are essentially the same. Table 71-1 identifies commonly abused drugs, listing their clin-ical manifestations and therapeutic management. Treatment goals for a patient suffering from drug overdose are to support the respiratory and cardiovascular functions, to enhance clearance of the agent, and to provide for safety of the patient and staff. 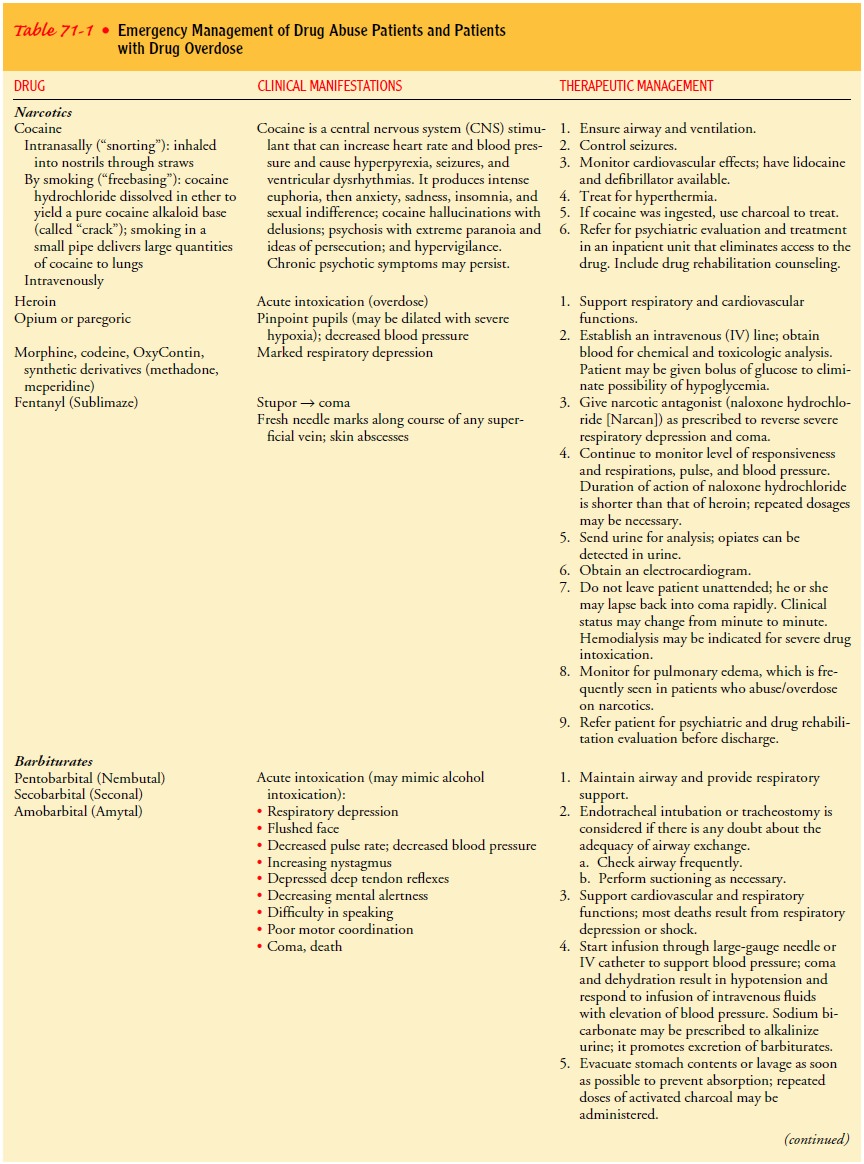 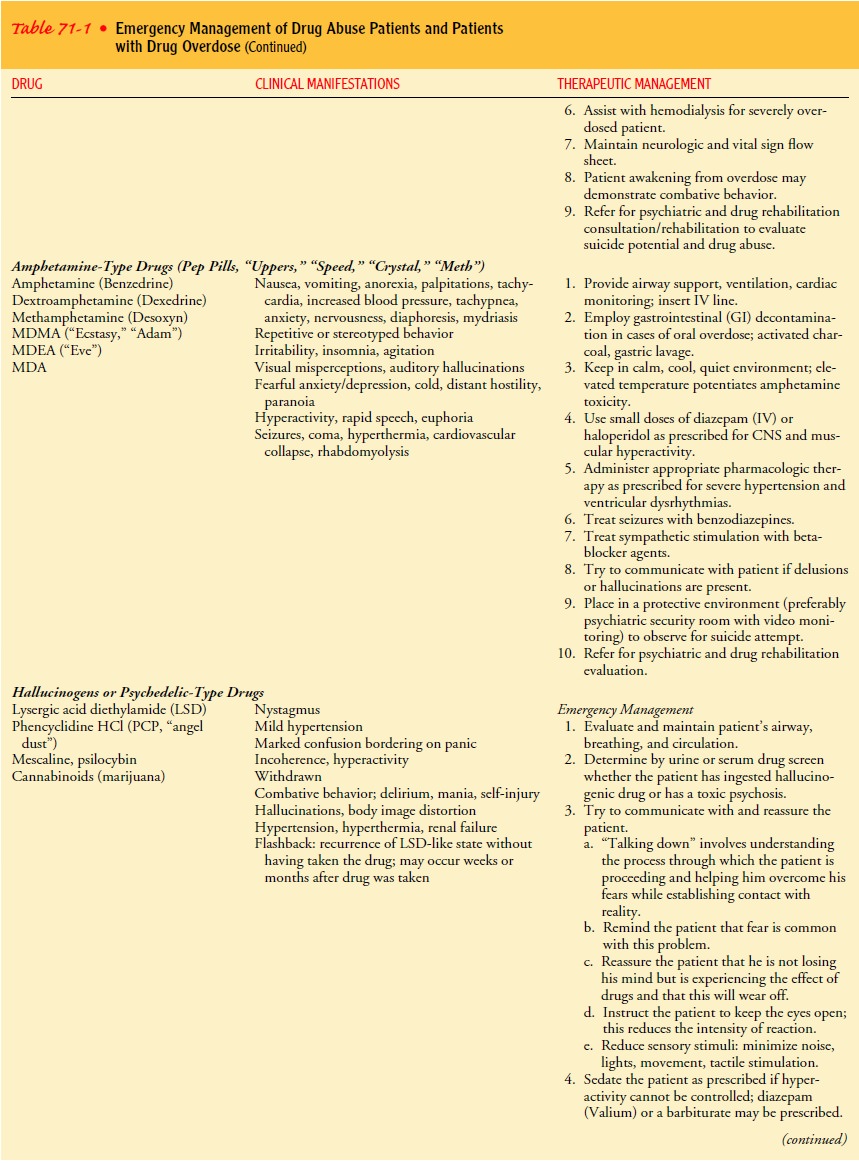 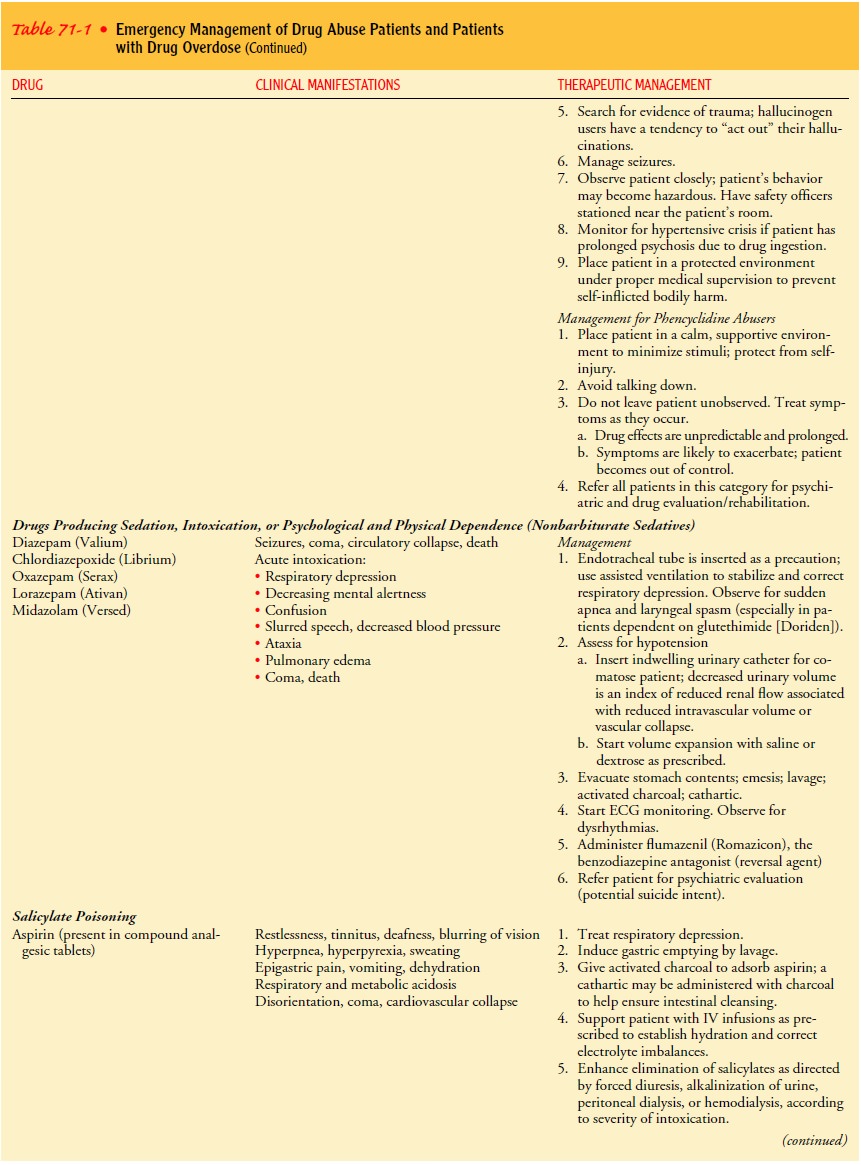 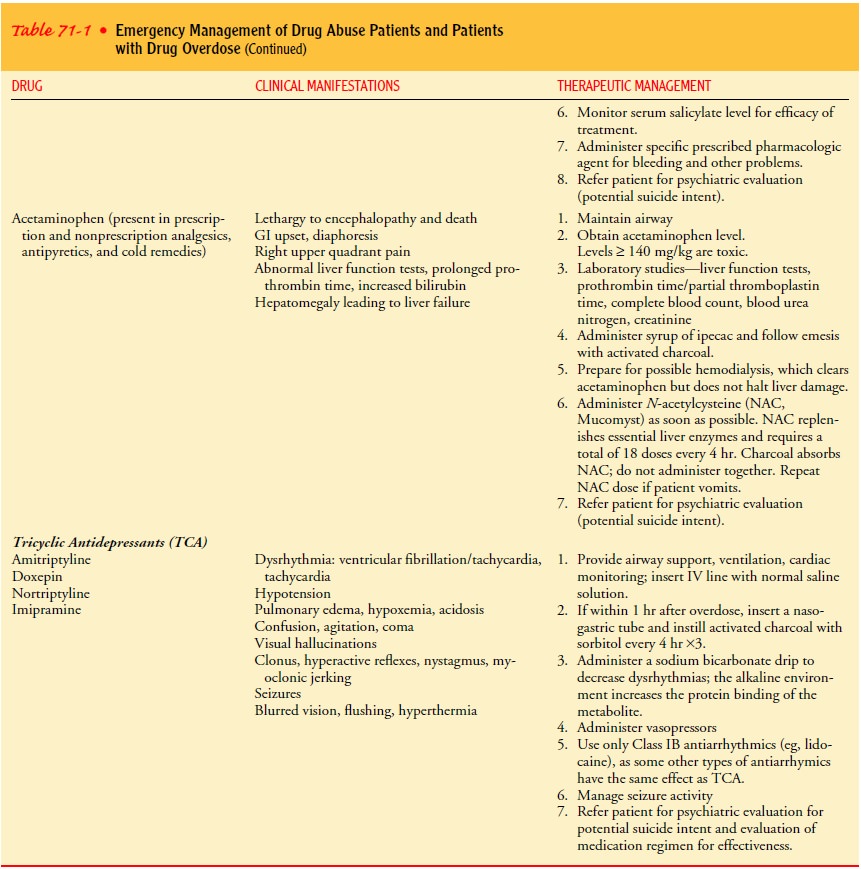 Alcohol is a psychotropic drug that affects mood, judgment, behavior, concentration, and consciousness. Many heavy drinkers are young adults or people older than 60 years of age. There is a high prevalence of alcoholism among ED patients. Because pa-tients who abuse alcohol return frequently to the ED, they often frustrate and tax the patience of the health care professionals who care for them. Their management requires patience and thought-ful, accurate, long-term treatment.

Alcohol, or ethanol, is a direct multisystem toxin and CNS depressant that causes drowsiness, incoordination, slurring of speech, sudden mood changes, aggression, belligerence, grandios-ity, and uninhibited behavior. In excess, it also can cause stupor, coma, and death. In the ED, the patient is assessed for head in-jury, hypoglycemia (which mimics intoxication), and other health problems. Possible nursing diagnoses include ineffective breathing pattern related to CNS depression and risk for violence (self-directed or directed at others) related to severe intoxication from alcohol.

Treatment involves detoxification of the acute poisoning, recovery, and rehabilitation. Commonly, the patient uses mechanisms of denial and defensiveness. The nurse should approach the patient in a nonjudgmental manner, using a firm, consistent, accepting, and reasonable attitude. Speaking in a calm and slow manner is helpful because alcohol interferes with thought processes. If the patient appears intoxicated, hypoxia, hypovolemia, and neuro-logic impairment must be ruled out before it is assumed that the patient is intoxicated. Typically, a blood specimen is obtained for analysis of the blood alcohol level.

If drowsy, the patient should be allowed to sleep off the state of alcoholic intoxication. During this time, maintenance of a patent airway and observation for symptoms of CNS depression are essential. The patient should be undressed and kept warm with blankets. On the other hand, if the patient is noisy or belligerent, sedation may be necessary. If sedation is used, the patient shouldbe monitored carefully for hypotension and decreased level of consciousness.

Additionally, the patient is examined for alcohol withdrawal delirium and also for injuries and organic disease, such as head injury, seizures, pulmonary infections, hypoglycemia, and nutri-tional deficiencies, that may be masked by alcoholic intoxication. People with alcoholism suffer more injuries than the general pop-ulation. Also, acute alcohol intoxication is the cause of trauma for many nonalcoholic patients. Pulmonary infections are also more common in patients with alcoholism, resulting from respiratory depression, an impaired defense system, and a tendency toward aspiration of gastric contents. The patient may show little in-crease in temperature or white blood cell count. The patient may be hospitalized or admitted to a detoxification center in an effort to examine problems underlying substance abuse.

Alcohol withdrawal syndrome (AWS) is an acute toxic state that occurs as a result of sudden cessation of alcohol intake after a bout of heavy drinking or, more usually, after prolonged intake of al-cohol. Severity of symptoms depends on how much alcohol was ingested and for how long. Delirium tremens may be precipitated by acute injury or infection (pneumonia, pancreatitis, hepatitis) and is the most severe form of AWS.

Patients with AWS show signs of anxiety, uncontrollable fear, tremor, irritability, agitation, insomnia, and incontinence. They are talkative and preoccupied and experience visual, tactile, olfactory, and auditory hallucinations that often are terrifying. Autonomic overactivity occurs and is evidenced by tachycardia, dilated pupils, and profuse perspiration. Usually, all vital signs are elevated in the alcoholic toxic state. Delirium tremens is a life-threatening condition and carries a high mortality rate.

The goals of management are to give adequate sedation and support to allow the patient to rest and recover without danger of injury or peripheral vascular collapse. A physical examination is performed to identify preexisting or contributing illnesses or injuries (eg, head injury, pneumonia). A drug history is obtained to elicit informa-tion that may facilitate adjustment of any sedative requirements. Baseline blood pressure is determined, because the patient’s sub-sequent treatment may depend on blood pressure changes.

Usually, the patient is sedated as directed with a sufficient dosage of benzodiazepines to establish and maintain sedation, which reduces agitation, prevents exhaustion, prevents seizures, and promotes sleep. The patient should be calm, able to respond, and able to maintain an airway safely on his or her own. A vari-ety of medications and combinations of medications are used (for example, chlordiazepoxide [Librium], lorazepam, and clonidine). Haloperidol or droperidol may be administered for severe acute AWS. Dosages are adjusted according to the patient’s symptoms (agitation, anxiety) and blood pressure response.

The patient is placed in a calm, nonstressful environment (usually a private room) and observed closely. The room remains lighted to minimize the potential for illusions and hallucinations. Homicidal or suicidal responses may result from hallucinations. Closet and bathroom doors are closed to eliminate shadows. Some-one is designated to stay with the patient as much as possible. The presence of another person has a reassuring and calming effect, which helps the patient maintain contact with reality.

Any visual misrepresentations (illusions) are explained, to orient the patient to reality.Fluid losses may result from gastrointestinal losses (vomiting), profuse perspiration, and respiration (hyperventilation). In addi-tion, the patient may be dehydrated as a result of alcohol’s effect of decreasing antidiuretic hormone. The oral or intravenous route is used to restore fluid and electrolyte balance.

Temperature, pulse, respiration, and blood pressure are recorded frequently (every 30 minutes in severe forms of delirium) in an-ticipation of peripheral circulatory collapse or hyperthermia (the two most lethal complications). Phenytoin (Dilantin) or other antiseizure medications may be prescribed to prevent or control repeated withdrawal seizures.

Frequently seen complications include infections (eg, pneu-monia), trauma, hepatic failure, hypoglycemia, and cardiovascu-lar problems. Hypoglycemia may accompany alcohol withdrawal, because alcohol depletes liver glycogen stores and impairs gluco-neogenesis; many patients with alcoholism also are malnourished. Parenteral dextrose may be prescribed if the liver glycogen level is depleted. Orange juice, Gatorade, or other forms of carbohydrates are given to stabilize the blood glucose level and counteract tremu-lousness. Supplemental vitamin therapy and a high-protein diet are provided as prescribed to counteract vitamin deficiency. The patient should be referred to an alcoholic treatment center for follow-up care and rehabilitation.