A poison is any substance that, when ingested, inhaled, absorbed, applied to the skin, or produced within the body in relatively small amounts, injures the body by its chemical action.

A poison is any substance that, when ingested, inhaled, absorbed, applied to the skin, or produced within the body in relatively small amounts, injures the body by its chemical action. Poisoning from inhalation and ingestion of toxic materials, both intentional and unintentional, constitutes a major health hazard and an emergency situation. Emergency treatment is initiated with the following goals:

·      To remove or inactivate the poison before it is absorbed

·      To administer a specific antidote to neutralize a specific poison

·      To implement treatment that hastens the elimination of the absorbed poison

Control of the airway, ventilation, and oxygenation are essential. In the absence of cerebral or renal damage, the patient’s progno-sis depends largely on successful management of respiration and circulation. Measures are instituted to stabilize cardiovascular and other body functions. ECG, vital signs, and neurologic status are monitored closely for changes. Shock, which may result from the cardiodepressant action of the substance ingested, from venous pooling in lower extremities, or from reduced circulating blood volume resulting from increased capillary permeability, is treated. An indwelling urinary catheter is inserted to monitor renal func-tion. Blood specimens are obtained to test for concentration of drug or poison.

Efforts are initiated to determine what substance was taken; the amount; time since ingestion; signs and symptoms, such as pain or burning sensations, any evidence of redness or burn in the mouth or throat, pain on swallowing or an inability to swallow, vomiting, or drooling; age and weight of the patient; and pertinent health history.

Measures are instituted to remove the toxin or decrease its ab-sorption. The patient who has ingested a corrosive poison is given water or milk to drink for dilution. However, dilution is not at-tempted if the patient has acute airway edema or obstruction or if there is clinical evidence of esophageal, gastric, or intestinal burn or perforation. The following gastric emptying procedures may be used as prescribed:

·      Syrup of ipecac to induce vomiting in the alert patient.

·      Gastric lavage for the obtunded patient (Chart 71-11). Gas-tric aspirate is saved and sent to the laboratory for testing (toxicology screens) 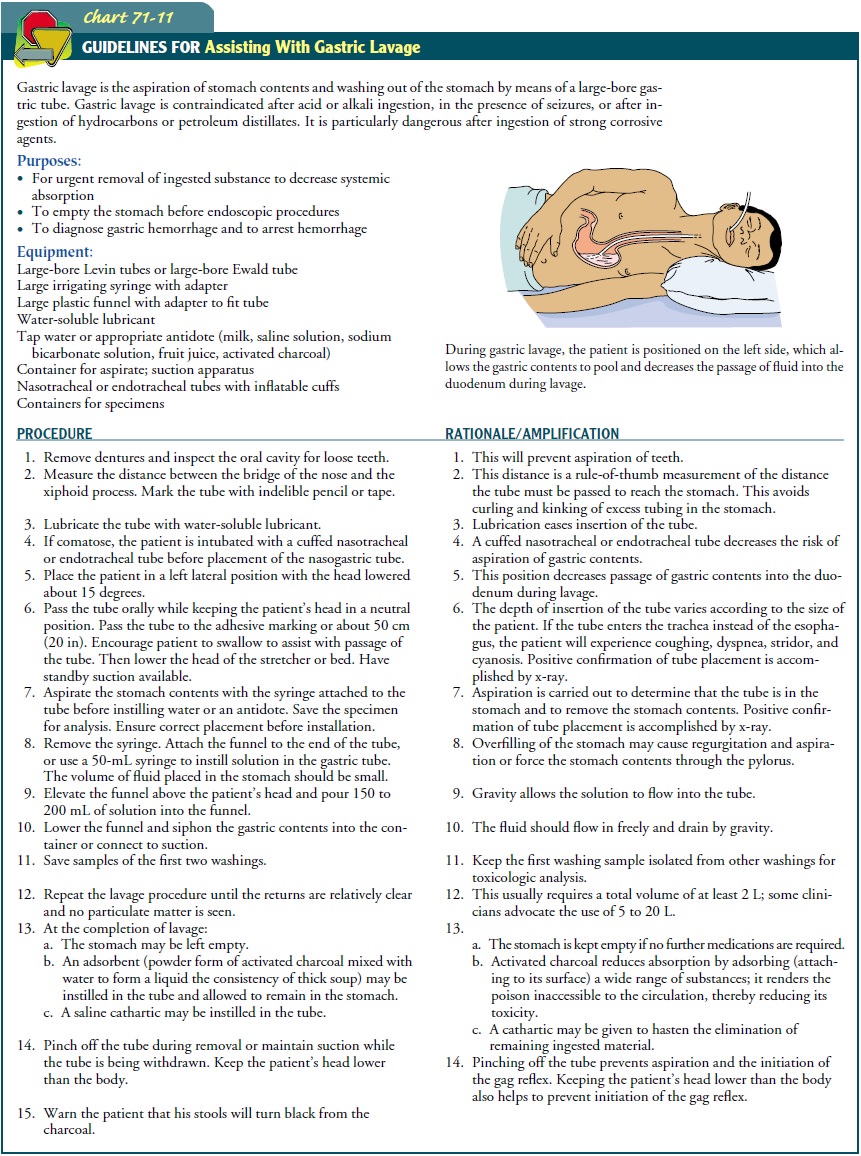 The specific chemical or physiologic antagonist (antidote) is administered as early as possible, to reverse or diminish the effects of the toxin. If these measures are ineffective, procedures are ini-tiated to remove the ingested substance. These procedures in-clude administration of multiple doses of charcoal, diuresis (for substances excreted by the kidneys), dialysis, and hemoperfusion. Hemoperfusion involves detoxification of the blood by process-ing it through an extracorporeal circuit and an adsorbent car-tridge containing charcoal or resin, after which the cleaned blood is returned to the patient.

Throughout detoxification, the patient’s vital signs, CVP, and fluid and electrolyte balance are monitored closely. Hypotension and cardiac dysrhythmias are possible. Seizures are also possible because of CNS excitement from the poison or from oxygen de-privation. If the patient complains of pain, analgesics are admin-istered cautiously. Severe pain causes vasomotor collapse and reflex inhibition of normal physiologic functions.

After the patient’s condition has stabilized and discharge is im-minent, written material indicating the signs and symptoms of potential problems related to the poison ingested and signs or symptoms requiring evaluation by a physician should be given to the patient. If poisoning was determined to be a suicide attempt, a psychiatric consultation should be requested before the patient is discharged. In cases of inadvertent poison ingestion, poison prevention and home poison-proofing instructions should be provided to the patient and family.

Carbon monoxide poisoning may occur as a result of industrial or household incidents or attempted suicide. It is implicated in more deaths than any other toxin except alcohol. Carbon monox-ide exerts its toxic effect by binding to circulating hemoglobin and thereby reducing the oxygen-carrying capacity of the blood. Hemoglobin absorbs carbon monoxide 200 times more readily than it absorbs oxygen. Carbon monoxide–bound hemoglobin, called carboxyhemoglobin, does not transport oxygen.

Because the CNS has a critical need for oxygen, CNS symp-toms predominate with carbon monoxide toxicity. A person suffering from carbon monoxide poisoning may appear intoxi-cated (from cerebral hypoxia). Other signs and symptoms include headache, muscular weakness, palpitation, dizziness, and confu-sion, which can progress rapidly to coma. Skin color, which can range from pink or cherry-red to cyanotic and pale, is not a reli-able sign. Pulse oximetry is also not valid, because the haemoglobin is well saturated.

It is not saturated with oxygen, but the pulse oximeter reads the saturation as such and presents the false impression that the patient is well oxygenated and in no danger. Exposure to carbon monoxide requires immediate treatment.

Goals of management are to reverse cerebral and myocardial hy-poxia and to hasten elimination of carbon monoxide. Whenever a patient inhales a poison, the following general measures apply:

·      Carry the patient to fresh air immediately; open all doors and windows.

In addition, for the patient with carbon monoxide poisoning, carboxyhemoglobin levels are analyzed on arrival at the ED and before treatment with oxygen if possible. Then 100% oxygen is administered at atmospheric or hyperbaric pressures to reverse hypoxia and accelerate the elimination of carbon monoxide. Oxy-gen is administered until the carboxyhemoglobin level is less than 5%. The patient is monitored continuously. Psychoses, spastic paralysis, ataxia, visual disturbances, and deterioration of mental status and behavior may persist after resuscitation and may be symptoms of permanent brain damage.

When unintentional carbon monoxide poisoning occurs, the health department should be contacted, so that the dwelling or building in question can be inspected. A psychiatric consultation is warranted if poisoning was determined to be a suicide attempt.

Skin contamination injuries from exposure to chemicals are chal-lenging because of the large number of offending agents with diverse actions and metabolic effects. The severity of a chemical burn is determined by the mechanism of action, the penetrating strength and concentration, and the amount and duration of exposure of the skin to the chemical.

The skin should be drenched immediately with running water from a shower, hose, or faucet.A constant stream of water should continue as the patient’s clothing is being removed. The skin of health care personnel as-sisting the patient should be appropriately protected if the burn is extensive or if the agent is significantly toxic or is still pres-ent. Prolonged lavage with generous amounts of tepid water is important.

In the meantime, attempts to determine the identity and char-acteristics of the chemical agent are necessary for future treat-ment. The standard burn treatment appropriate for the size and location of the wound (antimicrobial treatment, débridement, tetanus prophylaxis as prescribed) is instituted. The patient may require plastic surgery for further wound management. The pa-tient is instructed to have the affected area reexamined at 24 and 72 hours and in 7 days because of the risk for underestimating the extent and depth of these types of injuries.

Food poisoning is a sudden illness that occurs after ingestion of contaminated food or drink. Botulism is a serious form of food poisoning that requires continual surveillance. See Chart 71-12 for assessment questions. 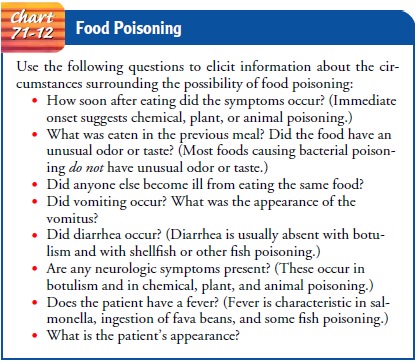 The key to treatment is determining the source and type of food poisoning. If possible, the suspected food should be brought to the medical facility and a history obtained from the patient or family.

Food, gastric contents, vomitus, serum, and feces are collected for examination. The patient’s respirations, blood pressure, sen-sorium, CVP (if indicated), and muscular activity are monitored closely. Measures are instituted to support the respiratory system. Death from respiratory paralysis can occur with botulism, fish poisoning, and other food poisonings.

Measures to control nausea are also important to prevent vom-iting, which could further exacerbate fluid and electrolyte imbal-ances. An antiemetic medication is administered parenterally as prescribed if the patient cannot tolerate fluids or medications by mouth. For mild nausea, the patient is encouraged to take sips of weak tea, carbonated drinks, or tap water. After nausea and vomiting subside, clear liquids are usually prescribed for 12 to 24 hours, and the diet is gradually progressed to a low-residue, bland diet.