An anaphylactic reaction is an acute systemic hypersensitivity reaction that occurs within seconds or minutes after exposure to certain foreign substances.

An anaphylactic reaction is an acute systemic hypersensitivity re-action that occurs within seconds or minutes after exposure to certain foreign substances, such as medications (eg, penicillin, iodinated contrast material), and other agents, such as insectstings (eg, bee, wasp, yellow jacket, hornet) or foods (eg, eggs, peanuts). Repeated administration of parenteral or oral thera-peutic agents (eg, repeated exposures to penicillin) may also pre-cipitate an anaphylactic reaction when initially only a mild allergic response occurred. See Chart 71-8 for anaphylaxis pre-vention strategies. 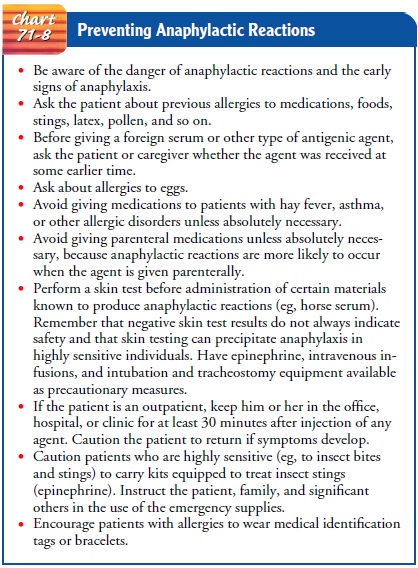 An anaphylactic reaction is the result of an antigen–antibody interaction in a sensitized individual who, as a consequence of previous exposure, has developed a special type of antibody (immunoglobulin) that is specific for that particular allergen. The antibody immunoglobulin E (IgE) is responsible for most of the immediate type of human allergic responses. The individual be-comes sensitive to a particular antigen after production of IgE to that antigen. A second exposure to the same antigen results in a more severe and more rapid response.

With an anaphylactic reaction, establishing a patent airway and ventilation is essential. (This is performed while another person administers epinephrine.) Early endotracheal tube intubation is essential to avoid loss of the airway, and oropharyngeal suction may be necessary to remove excessive secretions. Resuscitative measures are used, especially for patients with stridor and pro-gressive pulmonary edema. If glottal edema occurs, a cricothy-roidotomy is used to provide an airway.

Simultaneously with airway management, aqueous epineph-rine is administered as prescribed to provide rapid relief of the hypersensitivity reaction. Epinephrine may be administered again, if necessary and as prescribed. Judgment is used in choosing the route of administration, as follows:

·      Intramuscular injection when the reaction is more severe and progressive, and with concern that vascular collapse will inhibit absorption

·       Intravenous route (aqueous epinephrine diluted in saline solution and administered slowly), used in rare instances in which there is complete loss of consciousness and severe cardiovascular collapse. This method may precipitate car-diac dysrhythmias. ECG monitoring with a readily avail-able defibrillator is necessary. This method is controversial and is not usually recommended because it can lead to more distress than is initially present. An intravenous infusion of saline solution is initiated to provide for emergency access to a vein and to treat hypotension.

Additional treatments may include

·      Intravenous benzodiazepines for control of seizures, and corticosteroids for prolonged reaction with persistent hy-potension or bronchospasm

After the acute symptoms have been treated, the patient is usu-ally admitted to the hospital for observation. The patient should be informed about ways to prevent anaphylactic reactions. See Chart 71-10 for strategies to limit exposure to stinging insects. 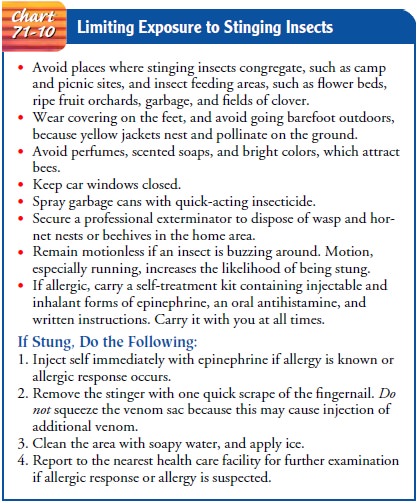