Structure and Properties of IS Elements

Most of the bacterial IS sequences contain two characteristic elements.

Structure and Properties of IS Elements

Most of the bacterial IS sequences contain two characteristic elements. First, a sequence of 10 to 40 base pairs at one end is repeated or nearly repeated in an inverse orientation at the other end. This is called IR, for inverted repeat. Second, the IS sequences contain one or two regions that appear to code for protein because they possess promoters, ribo-some-binding sequences, ATG (AUG) codons, and sense codons followed by peptide chain termination codons.

If proteins were made under control of these sequences, they would likely be involved with the process of copying the IS into a new position in the process of transpo-sition. Indeed, one of the gene products is generally called the transposase. As only extremely low quantities of a transposase are needed, its transcription and translation are specially designed to be inefficient. Additionally, some premium is placed on possessing a mini-mum size, and genes of a transposon frequently overlap. For example, in IS5 two oppositely oriented reading frames overlap. The shorter is contained entirely within the longer (Fig. 19.3).

Figure 19.3 The organization of IS5. The large and small proteins are in thesame codon register.

A high expression of the IS genes most likely would stimulate a high rate of transposition into new chromosomal sites. Since IS transposition rates appear low, something must protect IS genes from readthrough transcription and translation if the sequence has inserted into an active gene of the host cell. IS5 possesses six peptide chain termination codons flanking the protein genes—one at each end of the transposon, one in each reading frame. Additionally, the left end of the IS5 contains a transcription termination sequence oriented so as to prevent transcrip-tion from adjacent bacterial genes from entering the IS in the reading direction of the transposase. 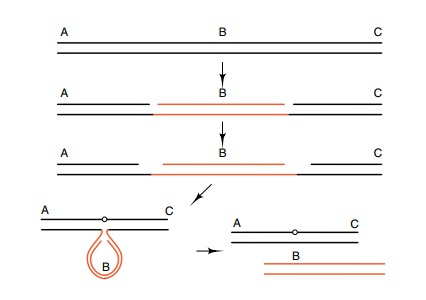 Figure 19.4 One mechanism by which nicking DNA can stimulate generationof deletions.

Not only do some IS sequences copy themselves or jump into new DNA locations, but they also stimulate the creation of deletions located near the IS elements. These deletions have one end precisely located at the end of an IS element and apparently arise in abortive transposition attempts that begin with transposase nicking the DNA at one of the boundaries of the IS element (Fig. 19.4). Such a facile creation of deletions in any selected region is highly useful to geneticists, for, as we have seen, a set of such deletions can be used for fine structure mapping.