An intermediate in the transposition process of Tn3 contains both the source and target molecules joined together in a cointegrate.

An intermediate in the transposition process of Tn3 contains both the source and target molecules joined together in a cointegrate. Then a recombination event in the res site resolves these structures. The exist-ence of cointegrates proves that Tn3 transposes by replication. Transposon Tn10 is different. No cointegrate structures were ever observed. This fact suggests that Tn10 might transpose without repli-cation.

A conceptually simple experiment can test whether Tn10 replicates as it transposes. Kleckner and Bender constructed a lambda phage that could not replicate upon entering a normal host. The phage contained Tn10 that carried both a tetracycline resistance gene and the lacZ gene. A second phage was also made that was identical to the first except that it contained a nonsense mutation in lacZ.

Consider the consequences of infecting a LacZ- cell with a phage that is heteroduplex for the point mutation (Fig. 19.15). Since the phage does not replicate, the only way for cells to become tetracycline resistant is for the transposon to enter the cell’s chromosome. If the transposon 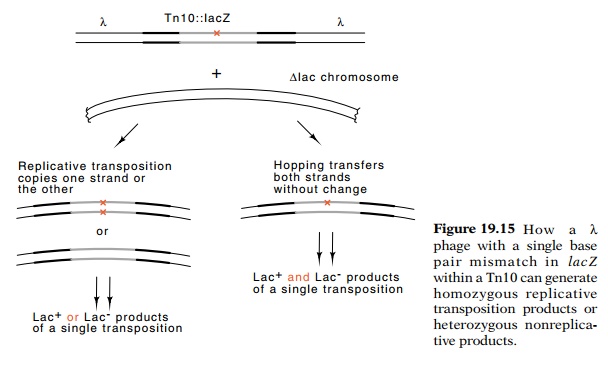 replicates as it transposes, then the lacZ that is inserted into the chro-mosome will be homozygous. It will either be wild type or mutant on both strands. If, however, the transposon excises itself from the phage and inserts itself into the chromosome before replicating, then the lacZ gene will remain heterozygous. If the cells are repair deficient, only after the first chromosome replication will each DNA molecule within the cells become homozygous. This means, however, that the descendants of the original cell will be of two types, Lac+ and Lac-. Because cells forming a colony do not mix, one half the colony will be Lac+ and one half Lac-. On Lac indicating plates a sector comprising about half the colony will indicate Lac+ and the other half will indicate Lac-.

A simple control experiment was possible by infecting cells lysogenic for lambda phage. The infecting lambda phage could recombine into the prophage in regions of homology at considerably higher frequency that the transposon relocates on its own. Therefore, tetracycline-resis-tant cells would have obtained a heterozygous copy of the lacZ gene, and should show sectoring on the indicating plates. They did. Therefore Tn10 hops.

In order for Tn10 to survive, it must hop infrequently, and shortly after passage of a replication fork . The infrequent hopping results

from a low synthesis rate and extreme instability of its transposase. The transposase is so unstable that the larger the Tn10 element, the less frequently it transposes, and transposase barely func-tions in trans at all. The low synthesis rate of transposase results from two factors. One is a low activity of the promoter serving transposase, pINon IS10-L, and the second is antisense messenger deriving from pOUT(Fig. 19.16). This second promoter is active, and its product hybridizes

with the beginning of transposase messenger to block translation. This is one of several examples of antisense messenger playing an important biological role. 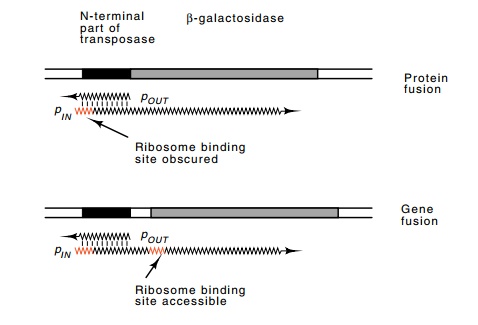 Figure 19.17 Hybridization of transcripts frompOUTtopINinterferes withtranslation of the protein fusion between transposase and β-galactosidase, but not the gene fusion.

decreased β-galactosidase synthesis from the protein fusion, but not from the gene fusion, thus showing that the antisense RNA affects translation of transposase messenger.

Another type of control of transposition also exists. It has been found that damaging the host cell dam methylase system increases transposi-tion frequency. The dam methylase is the system that methylates GATC sequences to permit repair enzymes to identify newly replicated DNA. There are two GATC sequences in IS10, one in the -10 region of pIN, and the other in the binding site of transposase. Methylating both of these sites greatly decreases the transposition frequency by reducing both the promoter activity and the transposase activity. What about half meth-ylated, or hemimethylated DNA, as is generated after replication? Invitro experiments showed that DNA methylated on one strand is signifi-cantly more active than fully methylated DNA, both in the promoter activity and in the transposase activity.

The activity of hemimethylated DNA could also be examined in vivo. Conjugating male cells transfer only one strand. The recipients synthe-size the complementary strand as it enters. Donor Dam+ cells were mated with Dam- recipient cells to generate hemimethylated DNA. This DNA was prevented from recombining into the female by the presence of a RecA- mutation. Thus, the only way recipient cells could become tetracycline resistant would be for the transposon to hop. The frequency of transposition hopping could be measured by determining the fre-quency of tetracycline-resistant cells. Hemimethylated Tn10 transposed much more frequently than fully methylated Tn10. These results mean than Tn10 is much more likely to transpose just after the replication fork has passed.