Transposons should form ideal vectors for genetic engineering. DNA to be transposed into a chromosome merely has to be inserted at a nonessential site within a transposon active in the desired cells, and then the transposon DNA has to be injected into the cells.

Transposons should form ideal vectors for genetic engineering. DNA to be transposed into a chromosome merely has to be inserted at a nonessential site within a transposon active in the desired cells, and then the transposon DNA has to be injected into the cells. Indeed, such constructs do work, and were first made with bacterial transposons Tn3, Tn5 and Tn10. The P element from Drosophila has many characteristics of a transposable sequence capable of regulating its transposition, and it too can be engineered for transformation of DNA into cells.

When a male P+ line is mated with a female non-P line, a short interval of intense transposition in the developing embryo follows, and many genes are inactivated by the insertion of P elements. Afterwards, the transposition activity ceases, and the resultant strains are genetically stable. The reverse–mating a P+ female with a non-P male–does not stimulate transposition. By analogy to the bacterial transposons or to phage lambda, the P elements behave as though they encode a repressor and enzymes necessary for transposition. Upon entry of a P element into a new cytoplasm, the temporary absence of repressor permits the transposition enzymes to be synthesized, and transposition likely oc-curs. Additionally, the Drosophila P elements appear to be stimulated to excise from their former locations as well as to copy themselves into new locations because many of the mutations generated by insertions of P elements can be induced to revert by the same mating process that stimulates P element mutations.

A P element would form a useful vector for inserting DNA into a chromosome of a fruit fly. By analogy with the bacterial transposons, nearly any sequence of foreign DNA could be inserted into the middle 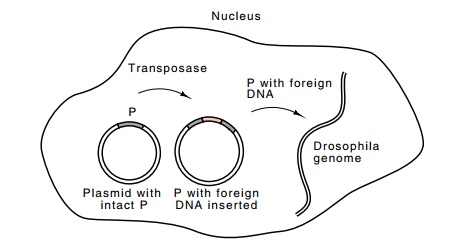 Figure 19.19 Using a plasmid with a functionalDrosophilaP element toprovide transposase so that the P element containing foreign DNA can transpose into the Drosophila genome.

Figure 19.20 Schematic of the transformation process inDrosophila. Somecells deriving from one end of the egg including the germ line cells of the GO generation may be transformed. Only in the G1 generation can all the cells in a fly contain copies of the transforming DNA.

of the P element. If this P element plus a P element providing transposase were introduced into a non-P egg cell, transposition en-zymes should be synthesized and move or copy the altered P element into the cellular DNA (Fig. 19.19).

Spradling and Rubin found that all these expectations were correct and that P elements do provide a basis for efficient transformation of DNA into Drosophila. They inserted the rosy gene into the middle of an internally deleted P element. Then they injected both plasmid DNA containing the P element with inserted DNA and plasmid DNA contain-ing an intact P into developing rosy negative Drosophila embryos. The injection was into a portion of the embryo in which the germ line cells develop. It was done while the embryo was multinucleate but before cell walls had developed. Many of the injected embryos survived and yielded mosaic adults whose progeny would then be homogeneous. Some possessed a functional rosy gene in all the fly’s tissues (Fig. 19.20). These flies were easily detected because their eye color was different from that of the untransformed rosy negative mutants.

The sequence of events in transformation is as follows. The injected P element DNA is transcribed in the nucleus, and the resulting RNA is transported to the cytoplasm where it is translated into transposition enzymes that return to the nucleus. There they catalyze the transposi-tion of the P element containing the rosy gene into a Drosophila chro-mosome. In the meantime, cell walls form, and the embryo develops to a larva and finally to an adult. Some of the cells of its germ line contain the functional rosy gene carried in the P element. When this fly matures and mates with a mutant rosy strain, those progeny that receive egg or sperm containing the rosy gene on the P element will then express functional xanthine dehydrogenase that is encoded by the rosy gene.

P element transformation is a valuable technique for the introduction of DNA into Drosophila. It is used routinely in the study of gene regulation and development. P element transformation possesses sev-eral drawbacks, however. First, the size of DNA that can be inserted into the chromosome is limited to what can be placed within a P element and handled on a plasmid carrying a P element. Some interesting genes are much larger than this size. A second problem is that P elements insert randomly. Because the expression level of a gene in Drosophila depends upon the position into which it has been placed, comparisons of gene activity in a collection of transformants cannot be closely compared.