IS Elements in Bacteria

Nonsense mutations in many operons have polar effects, that is, they reduce the expression of downstream genes.

IS Elements in Bacteria

Nonsense mutations in many operons have polar effects, that is, they reduce the expression of downstream genes. In efforts to study these effects more carefully, in the late 1960s Malamy, Shapiro, and Starlinger each isolated and characterized strongly polar mutations in the lac and gal operons. In addition to the expected classes of nonsense mutations,another type was also found. This new type was highly polar but not suppressible by known nonsense suppressors. Since the mutations reverted, albeit at very low rates, it seemed likely that they were inser-tions and not deletions. Therefore it became of great interest to find out just what these mutations were. Nowadays this question would probably be answered by cloning a portion of the DNA containing the mutation and sequencing it to determine the exact nature of the mutation. Such a procedure was impossible at the time and less direct experiments were performed. 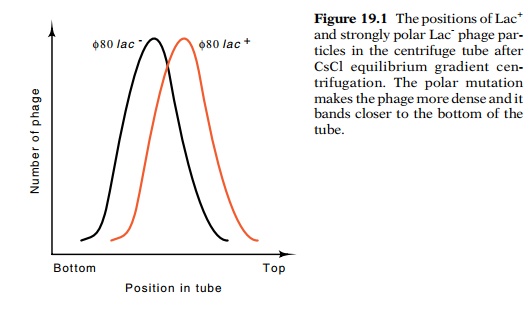 At first, the insertions were suspected of being merely random se-quences that somehow had been inserted into the genes being studied. The mechanism of their generation is not so easy to imagine, however. Point mutations, insertions and deletions of a nucleotide or two, and sizable deletions may all be created by simple reactions likely to occur in cells. Not so for sizable insertions.

Additional study of the IS sequences began to clarify their origin. One particularly valuable technique for their study was the formation of DNA heteroduplexes (Fig. 19.2). DNA isolated from the gal and lac transducing phage with and without the IS sequences was used in these experiments. When necessary, the strands of these phage could even be separated and purified. The lengths of IS sequences fell into discrete size classes, and any particular IS sequence was found to insert into a gene in either of the two possible orientations. The existence of the length classes suggested that a small number of IS sequences might be responsible for all the insertions. Indeed, fewer than ten different IS sequences have been found in Escherichia coli (Table 19.1). The demon-stration that IS elements were specific sequences did not explain how they were inserted into different sites in the cell’s chromosome, but by analogy to lambda phage, the elements were expected to code for one or more proteins involved in the process. By now the IS elements have been obtained on phage and plasmids and they have been sequenced and characterized using in vitro mutagenesis as described below. From these studies a comprehensive picture of their structure and function has emerged. 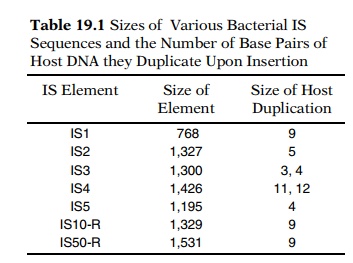