While IS elements were under investigation, another category of genetic elements was also being studied.

While IS elements were under investigation, another category of genetic elements was also being studied. These were plasmids that carry genes encoding proteins that confer resistance to antibiotics. They are called R-factors.

Not long after antibiotics began to be widely used, many bacterial isolates from human infections were found to be resistant to one or more of the drugs. These isolates were not resistant by virtue of a mutation altering the cellular target of the antibiotics; instead, they synthesized specific proteins or enzymes, which conferred resistance to the cells either by detoxifying the antibiotics or by blocking their entry into the cell. For example, penicillin-resistant strains were found to synthesize a β-lactamase that opens the lactam ring of penicillin and renders it harmless to the cells (Fig. 19.5).

Although many R-factors were fertile and could transfer themselves to other cells by conjugation, the speed with which different drug resistances appeared on R-factors was astonishingly rapid. Soon after the introduction of a new antibiotic, R-factors that carried genes con-ferring resistance to the new antibiotic would be found in many geographic locations. Unfortunately this has created great problems in the treatment of infections. The drug-resistance factors rapidly pick up genes encoding resistance to the most commonly used drugs, and soon treatment of infections becomes difficult. Now physicians use restraint in prescribing antibiotics to slow the spread of drug-resistance genes.

The ability of drug-resistance genes to spread rapidly suggested that they could hop from one R-factor to another or to other DNA sequences such as phage or the bacterial chromosome. One demonstration of this property came from an attempt to construct a lambda phage carrying the kanamycin-resistance gene from an R-factor.

The objective of the experiment was to generate a λkan transducing phage by forcing lambda to insert at random locations, and then excise. A small fraction of the excised phage would have picked up the kanamy-cin genes and be able to transduce cells to Kanr. Cells deleted of attB and carrying a kanamycin-resistance R-factor were infected with lambda. This lambda phage was deleted of part of the b2 region so that the DNA of the resulting kanamycin-transducing phage would not be

Figure 19.5 The structure of the lactam ring of penicillins and related antibi-otics and their structure following ring opening by β-lactamase. Different penicillins possess different R groups.

too large to be packaged. To permit the phage to integrate via the Int pathway, the deletions chosen did not extend into the att region. As seen, a small fraction of the resulting lysogens should then contain a lambda inserted into DNA adjacent to the kanamycin-re-sistance gene(s) by virtue of integrating into sites that weakly resemble lambda’s normal integration site (Fig. 19.6). Upon induction, a small fraction of the phage were expected to excise incorrectly, pick up the adjacent kanamycin-resistance genes, and be capable of transducing kanamycin resistance to other cells. 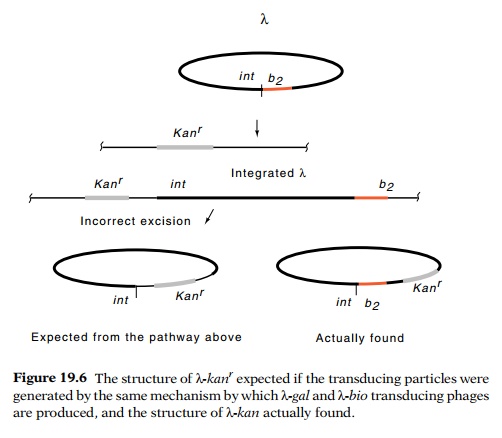 Indeed, kanamycin-transducing phage were isolated. The phage pos-sessed several unexpected properties, however. First, the additional DNA in these phage was not located immediately adjacent to attP. Second, kanamycin-resistant transformants obtained by infecting cells with the λkan phage were lysogenic for lambda only if they contained an attB. These properties can be understood as follows. The DNA coding for kanamycin resistance originally hopped or was copied onto lambda by a recombination event rather than arriving there after an improper phage excision of the type that produces gal and bio transducing parti-cles. Therefore the foreign DNA could be located anywhere on the phage and need not be immediately adjacent to attP. Second, a copy of the sequence encoding the kanamycin resistance could also hop or be copied from the phage onto the chromosome.

The DNA responsible for conferring the kanamycin resistance was examined by DNA heteroduplexes. It was found to be 5,400 base pairs long and flanked by inverted repeated sequences 1,500 base pairs long. Some of the drug-resistance genes studied on the R-factors themselves

also possessed similar flanking sequences. Further study showed that the repeated sequences flanking the drug-resistance genes were trans-ferred when the drug-resistance gene hopped. Finally, it was found that the repeated elements at the ends of many of the drug-resistance genes possessed DNA sequences essentially identical to known IS elements. Thus it appears that two IS elements can flank a gene and then facilitate copying the composite element into other DNA locations by the same transposition reactions as are used by IS elements themselves. Se-quences with these general properties and structure are called transposons, or Tn elements (Table 19.2). The element described in this section is called Tn5, and the IS sequences associated with it are called IS50 so as not to be confused with IS5. 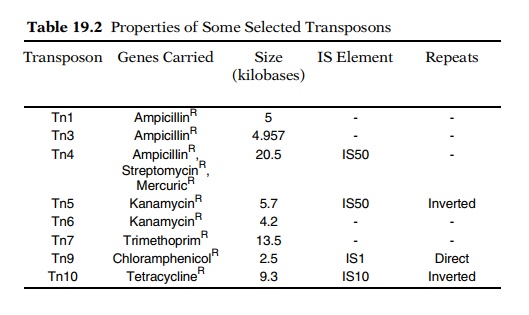