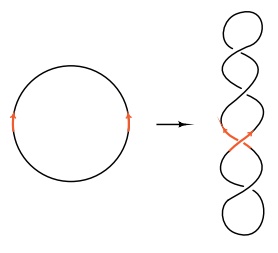 Figure 19.13 Well-separated in-verted repeats of a sequence on a circle can be adjacent to one an-other and parallel when the circle is supercoiled.

Experiments with a plasmid containing two res sites of Tn3 showed that resolution would proceed in vivo in the presence of a Tn3 with a functional resolvase gene. The reaction would also take place in vitro upon the addition of purified resolvase. This reaction occurred, how-ever, only if the plasmid DNA was supercoiled and if the two res sites on the plasmid were correctly oriented. Reversing one blocked the reaction, in contrast to what is seen with lambda phage where the excision reaction will proceed with the att sites in either orientation with respect to one another.

The two possible explanations for the orientation requirement of the interacting sites of the Mu-Tn3 class of transposons can be tested by making use of the lambda phage integration enzymes. After a plasmid containing Mu sites which are flanked by lambda phage attachment sites has supercoiled itself, then reaction between the lambda att sites can be performed. Such an interaction should have little effect upon the overall supercoiled structure of the plasmid. Yet, if the sites are in one

Figure 19.14 Action of lambda phage Int protein on a circle containing the Muends can separate it into two chemically separate circles without dramatically altering the wrapping structure in the vicinity of the Mu ends.

orientation, the reaction will invert the Mu sites, and if the lambda att sites are in the opposite orientation, the reaction will generate two separate DNA molecules, each containing one of the Mu sites (Fig. 19.14). Neither orientation of the lambda att sites had any effect on the Mu transposition reaction. This result shows that tracking is not used by the Mu enzymes to determine the transposition sites’ orientations, but rather it is the orientation of the sites with respect to one another in the supercoiled DNA that matters.