The above-mentioned difficulties with P element transformation can be overcome by utilizing a property of the cells.

The above-mentioned difficulties with P element transformation can be overcome by utilizing a property of the cells. Not surprisingly, parasites have capitalized on the cell’s need for mechanisms to preserve frag-ments of broken chromosomes. The P elements appear to use this machinery by leaving a gap behind when they excise themselves from one chromosomal location and insert themselves into another. The cell’s gap repair or chromosome rescue enzymes then replace the DNA missing from the gap by making use of a copy of the chromosome that still contains a P element.

Ordinarily, the ends of chromosomes are not recognized by this repair pathway due to the presence of the telomere structures. The gaps left by P element excision, however, lack telomeres and are acted upon by the rescue enzymes.

In the rescue process a small amount of DNA is digested from the ends by an exonuclease. Then, at each end, one of the two DNA strands can be further digested so as to leave single-stranded tails. As a result of RecA-like activity, these single-stranded tails can invade double-stranded DNA possessing complementary sequences. Subsequent elon-gation by DNA polymerase and recombination completes the process that removes the gap. If the P element excision and repair process occurs shortly after chromosome replication, then the sister chromatids are adjacent to one another and the centromere has not yet divided. Hence, the most probable template for repair of a P element excision event is simply the sister chromatid (Fig. 19.21). Thus, the gap is repaired with another copy of the P element. In toto, a P element has been released with no net change to the chromosome. Sometimes, however, a P element can excise from the chromosome before chromosome replica-tion. In this case the template for repair of the gap can be the homolo - gous chromosome. This other chromosome need not carry a P element in this position, and therefore the healed chromosome may not contain a P element. 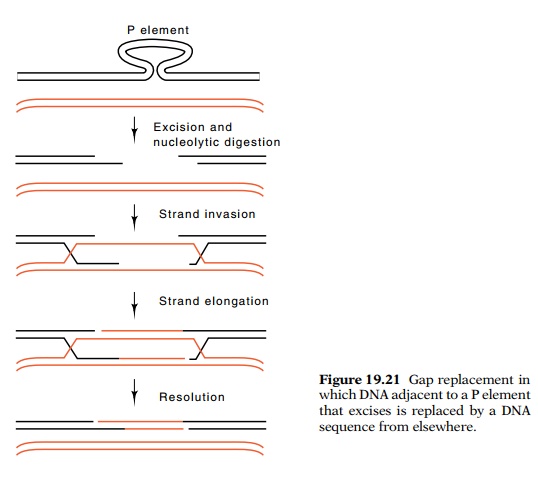 Consider a P element near or in a region we wish to modify. If it can be induced to excise, then the repair mechanisms in the cell can use either the sister chromatid, or the homologous chromosome, or even just a homologous sequence located on a different chromosome.

Therefore, we can modify the sequence as we desire, and insert it without a means of expression into the cells. Then we can induce excision of the P element inactivating our gene. Repair of the resulting gap can use the specially doctored DNA, and a fraction of the surviving cells will have replaced a portion of their original gene with our modified sequence. Hence, a directed mutagenesis step has been performed. This replace-ment does not require that the P element have carried the entire modified gene, and further, the DNA sequence we have introduced by this method goes exactly to the desired chromosome site.

In summary, P elements are useful in genetic engineering in three basic types of experiments. First, they can be used as mutagens. They can transpose into genes and inactivate them. Because it is straightfor-ward to clone the DNA flanking such an insertion event, it is possible to search for P element transformation events that have inactivated a desired gene, and then to clone the inactivated gene. A second use of the P elements is to carry DNA into Drosophila. Either intact genes can be carried into whatever location a P element hops into, or fragments of genes can be engineered to replace exactly a region of DNA already in the chromosome. The third use of P elements is the enhancer trap experiments that were described. In those experiments, a P element transposes a reporter gene into the influence region of an enhancer.