A transposon could carry DNA with phage-like functions rather than a simple antibiotic resistance gene.

A transposon could carry DNA with phage-like functions rather than a simple antibiotic resistance gene. Such a transposon would be able to travel freely from cell to cell autonomously as a virus. Phage Mu first drew attention by its ability to generate mutations in infected cell populations. These mutations were generated by its insertion into various bacterial genes. Careful mapping of many Mu phage insertions into the β-galactosidase gene showed that Mu inserted without high specificity in its target sequence. Thus, Mu behaved like a lambda phage with little sequence specificity in its choice of the bacterial att site.

Two facts, however, indicate that Mu is more like a transposon than like phage lambda. First, Mu duplicates five bases of chromosomal DNA upon its insertion. Most transposons generate such duplications. These arise as a result of staggered nicking of the target sequence followed by insertion of the transposon and replication (Fig. 19.9). Second, Mu does not excise from the chromosome and replicate in the cytoplasm. Even though an induced cell may yield a hundred Mu phage upon lysis, never during the lytic cycle are any free Mu DNA molecules observed. The Mu DNA is replicated only by transposition. Packaging of the Mu takes place directly on the integrated DNA. A dramatic demonstration of replication by transposition is provided by Southern transfers of DNA taken from a Mu lysogen before and after induction of the phage. Before induction, only a single restriction fragment of the host DNA contains sequences 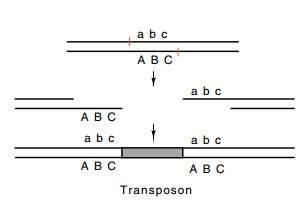 Figure 19.9 Insertion of atransposon into a site with staggered nicks followed by filling in of the gaps generates a duplication of the se-quence included between the nicks.

Mu packages its DNA right out of the chromosomal insertions. Part of the head structure recognizes a sequence near the left end of the DNA, reaches out beyond the phage 50 to 150 base pairs, and begins packaging. A headfull of DNA is packaged, and the remaining DNA is then

cleaved and the tail is attached. Since a Mu phage headfull of DNA is slightly larger than the genome of the phage, the packaged DNA usually extends beyond the right end of the phage and includes about 3,000 base pairs of bacterial DNA as well. The headfull hypothesis explains the fact that a Mu phage carrying an insertion packages a smaller amount of bacterial DNA roughly equal in amount to the size of the insertion.

The sequence heterogeneity that results from the headfull mode of packaging is dramatically displayed when heteroduplexes of phage genomes are analyzed in the electron microscope. Since it is highly unlikely that the two strands from the same phage will rehybridize upon formation of the heteroduplex, two unrelated strands will associate. The phage DNA portions of the strands will, of course, be complementary and will form a duplex. The strands of bacterial DNA on the right end, however, are unlikely to be complementary, and these will remain single-stranded and are observed as “split ends.” The similar split ends from the left end are too small to be clearly observed.