• A basic repeating structural unit of a crystalline solid is called a unit cell.

• A unit cell is characterised by the three edge lengths (a, b, c) or lattice constants and the angle between the edges α, β and γ.

2.     Give any three characteristics of ionic crystals.

2. These solids do not conduct electricity, because the ions are fixed in their lattice positions.

3. They conduct electricity in molten state (or) when dissolved in water because, the ions are free to move in the molten state or solution.

4. They are hard as only strong external force can change the relative positions of ions 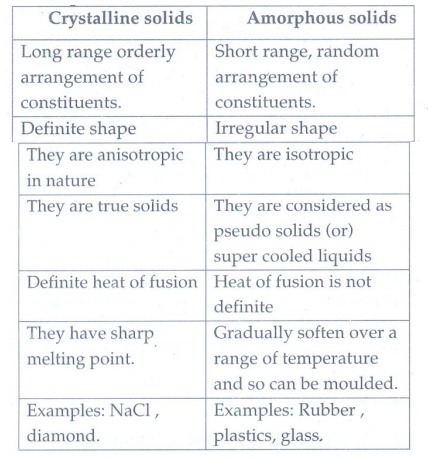 • They are anisotropic in nature

• They are true solids

• They have sharp melting point.

• They are considered as pseudo solids (or) super cooled liquids

• Heat of fusion is not definite

• Gradually soften over a range of temperature and so can be moulded. 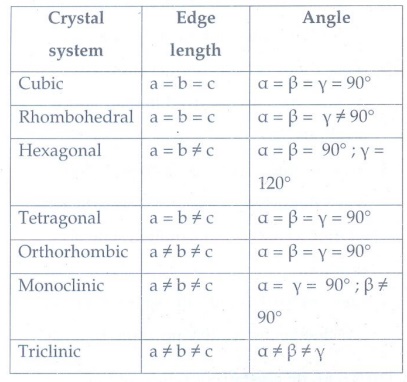 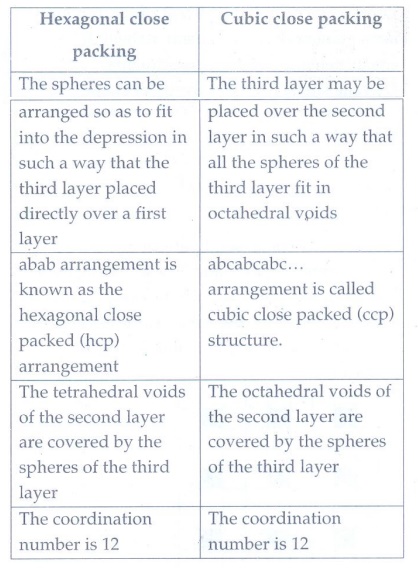 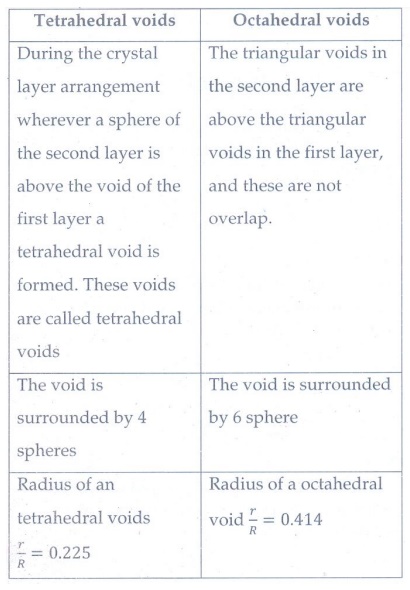 • During the crystal layer arrangement wherever a sphere of the second layer is above the void of the first layer a tetrahedral void is formed. These voids are called tetrahedral voids

• The void is surrounded by 4 spheres

• The void is surrounded by 6 sphere

If the deviation occurs from the perfect crystal is due to missing atoms, displaced atoms or extra atoms, the imperfection is named as a point defect.

Such defects arise due to imperfect packing during the original crystallisation or they may arise from thermal vibrations of atoms at elevated temperatures.

• Schottky defect arises due to the missing of equal number of cations and anions from the crystal lattice.

• This defect does not change the stoichiometry of the crystal.

• Ionic solids in which the cation and anion are of almost of similar size show schottky defect. Example: NaCl.

• Schottky defects in a crystal, lowers its density.

• For example, the theoretical density of vanadium monoxide (VO) is 6.5 g cm−3, but the actual experimental density is 5.6 g cm −3. 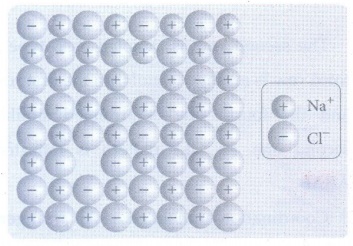 10. Write short note on metal excess and metal deficiency defect with an example.

• Metal excess defect arises due to the presence of more number of metal ions as compared to anions.

• Example: When NaCl crystals are heated in the presence of sodium vapour, Na+ ions are formed and are deposited on the surface of the crystal.

• Chloride ions (CƖ−) diffuse to the surface from the lattice point and combines with Na+ ion. The electron lost by the sodium vapour diffuse into the crystal lattice and occupies the vacancy created by the CƖ − ions.

• Such anionic vacancies which are occupied by unpaired electrons are called F centers.

• The formula of NaCl which contains excess Na+ ions can be written as Na1+xCl.

• Metal deficiency defect arises due to the presence of less number of cations than the anions.

• This defect is observed in a crystal in which, the cations have variable oxidation states. 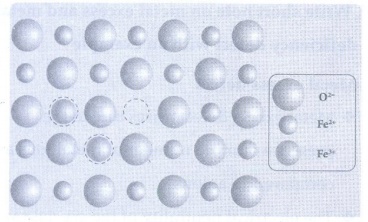 • Example: FeO crystal, some of the Fe2+ ions are missing from the crystal lattice.

• To maintain the electrical neutrality, twice the number of other Fe2+ ions in the crystal is oxidized to Fe3+ ions.

• In such cases, overall number of Fe2+ and Fe3+ ions is less than the O2− ions. It was experimentally found that the general formula of ferrous oxide is FexO, where x ranges from 0.93 to 0.98.

11. Calculate the number of atoms in a fcc unit cell.

• Identical atoms present at each corner as well as in the centre of each face.

• The atom in the face centre is shared by two unit cells.

• Each corner atom shared by 8 unit cells and makes 1/8 contribution to the unit cell.

12. Explain AAAA and ABABA and ABCABC type of three dimensional packing with the help of neat diagram. 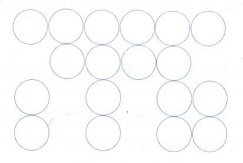 All the rows are identical and the packing is called AAA type. In this arrangement each sphere is in contact with four of its neighbours.

In this type, the second row spheres are arranged in such a way that they fit in the depression of the first row. 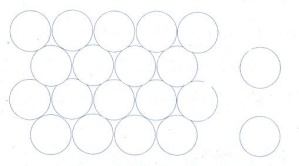 Coordination number of ABAB arrangement is 6.

The first layer is formed by arranging two dimensional ABAB arrangements i.e. the spheres of second row fit into the depression of first row.

The voids (y) in the first layer (A) are partially covered by the spheres of layer (B), now such a void in (A) is called a octahedral void. This constitutes six spheres - three in the lower layer (A) and three in the upper layer (B). When the centers of these six spheres are joined, an octahedron is formed. Simultaneously new tetrahedral voids (or holes) are also created by three spheres in second layer (B) and one sphere of first layer (A) 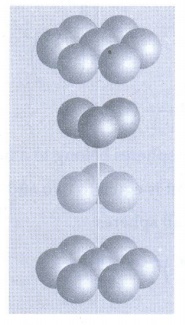 13. Why ionic crystals are hard and brittle?

The structural units of an ionic crystal are cations and anions. They are bound together by strong electrostatic attractive forces. Cations are surrounded by as many anions as possible and vice versa to maximize the attractive force.

14. Calculate the percentage efficiency of packing in case of body centered cubic crystal.

The spheres are touching along the leading diagonal of the cube 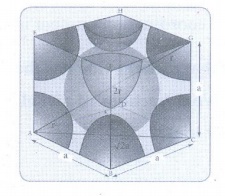 Radius of the sphere is given as

∴ Volume of the sphere with radius 'r'

15. What is the two dimensional coordination number of a molecule in square close packed layer?

In the square close packed structure, each sphere is in contact with four of its neighbours. The two dimensional coordination number is 4.

Charge on Ni = charge on Oxygen

So that oxygen has charge = −2

Fraction of nickel that exists as Ni2+

Fraction of nickel that exists as Ni3+

Percentage of nickel that exists as Ni2+

Percentage of nickel that exists as Ni3+

• The number of nearest neighbours that surrounding a particle in a crystal is called the coordination number of that particle.

• In bcc structure the entire corner atom touches the atom that occupies the body centre. Hence, each atom is surrounded by eight nearest neighbors and coordination number is 8.

volume of 208g of element

19. Aluminium crystallizes in a cubic close packed structure. Its metallic radius is 125pm. calculate the edge length of unit cell.

20. if NaCl is doped with 10-2 mol percentage of strontium chloride, what is the concentration of cation vacancy?

Moles of SrCl2 is very negligible as compare to total moles

Cation vacancies per mole of NaCl

21. KF crystallizes in fcc structure like sodium chloride. calculate the distance between K+ and F− in KF.( given : density of KF is 2.48 g cm−3 )

22. An atom crystallizes in fcc crystal lattice and has a density of 10 gcm−3 with unit cell edge length of 100pm. calculate the number of atoms present in 1 g of crystal.

23. Atoms X and Y form bcc crystalline structure. Atom X is present at the corners of the cube and Y is at the centre of the cube. What is the formula of the compound?

Y present at the centre of the cube.

Centre atom shared by one unit cell. The formula of the compound is XY.

24. Sodium metal crystallizes in bcc structure with the edge length of the unit cell 4.3 ×10−8 cm . calculate the radius of sodium atom.

Frenkel defect arises due to the dislocation of ions from its crystal lattice. The missing ion occupies an interstitial position. This defect is shown by ionic solids in which cation and anion differ in size. This defect does not affect the density of the crystal.

For example, In AgBr, small Ag+ ion leaves its normal site and occupies an interstitial position 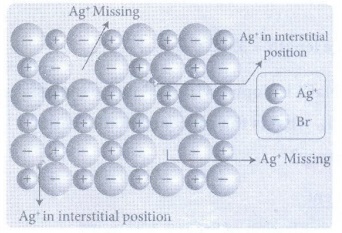 Number of atoms of an element

Number of atoms in l00g of an element

2. Determine the density of CsCl which crystallizes in a bcc type structure with an edge length 412.1 pm.

3. A face centered cubic solid of an element (atomic mass 60) has a cube edge of 4A. Calculate its density.

4. Barium has a body centered cubic unit cell with a length of 508 pm along an edge. What is the density of barium in g cm−3?