According to the law of nature nothing is perfect, and so crystals need not be perfect. They always found to have some defects in the arrangement of their constituent particles.

According to the law of nature nothing is perfect, and so crystals need not be perfect. They always found to have some defects in the arrangement of their constituent particles. These defects affect the physical and chemical properties of the solid and also play an important role in various processes. For example, a process called doping leads to a crystal imperfection and it increases the electrical conductivity of a semiconductor material such as silicon. The ability of ferromagnetic material such as iron, nickel etc., to be magnetized and demagnetized depends on the presence of imperfections. Crystal defects are classified as follows

In this portion, we concentrate on point defects, more specifically in ionic solids. Point defects are further classified as follows

This defect is also called intrinsic (or) thermodynamic defect. In stoichiometric ionic crystals, a vacancy of one ion must always be associated with either by the absence of another oppositely charged ion (or) the presence of same charged ion in the interstitial position so as to maintain the electrical neutrality.

Schottky defect arises due to the missing of equal number of cations and anions from the crystal lattice. This effect does not change the stoichiometry of the crystal. Ionic solids in which the cation and anion are of almost of similar size show schottky defect. Example: NaCl. 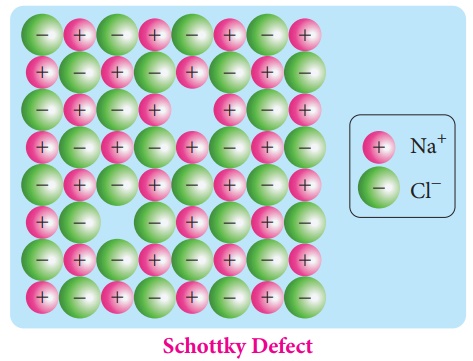 Frenkel defect arises due to the dislocation of ions from its crystal lattice. The ion which is missing from the lattice point occupies an interstitial position. This defect is shown by ionic solids in which cation and anion differ in size. Unlike Schottky defect, this defect does not affect the density of the crystal. For example AgBr, in this case, small Ag+ ion leaves its normal site and occupies an interstitial position as shown in the figure. 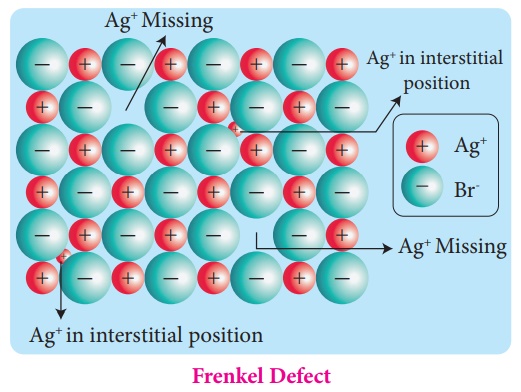 Metal excess defect arises due to the presence of more number of metal ions as compared to anions. Alkali metal halides NaCl, KCl show this type of defect.

For example, when NaCl crystals are heated in the presence of sodium vapour, Na+ ions are formed and are deposited on the surface of the crystal. Chloride ions (Cl-) diffuse to the surface from the lattice point and combines with Na+ ion. The electron lost by the sodium vapour diffuse into the crystal lattice and occupies the vacancy created by the Cl- ions. Such anionic vacancies which are occupied by unpaired electrons are called F centers. Hence, the formula of NaCl which contains excess Na+ ions can be written as Na1+ xCl .

ZnO is colourless at room temperature. When it is heated, it becomes yellow in colour. On heating, it loses oxygen and thereby forming free Zn2+ ions. The excess Zn2+ ions move to interstitial sites and the electrons also occupy the interstitial positions.

Metal deficiency defect arises due to the presence of less number of cations than the anions. This defect is observed in a crystal in which, the cations have variable oxidation states.

For example, in FeO crystal, some of the Fe2+ ions are missing from the crystal lattice. 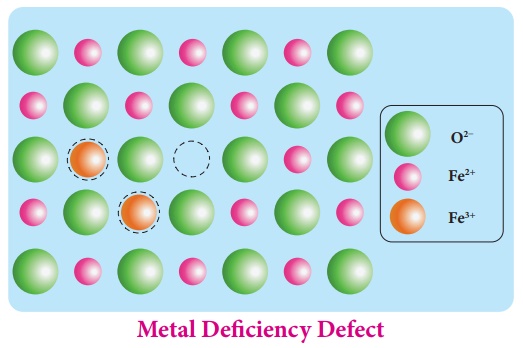 To maintain the electrical neutrality, twice the number of other Fe2+ ions in the crystal is oxidized to Fe3+ ions. In such cases, overall number of Fe2+ and Fe3+ ions is less than the O2- ions. It was experimentally found that the general formula of ferrous oxide is FexO, where x ranges from 0.93 to 0.98.

A general method of introducing defects in ionic solids is by adding impurity ions. If the impurity ions are in different valance state from that of host, vacancies are created in the crystal lattice of the host. For example, addition of CdCl2 to silver chloride yields solid solutions where the divalent cation Cd2+ occupies the position of Ag+. This will disturb the electrical neutrality of the crystal. In order to maintain the same, proportional number of Ag+ ions leaves the lattice. This produces a cation vacancy in the lattice, such kind of crystal defects are called impurity defects.