There are two types of unit cells: primitive and non- primitive. A unit cell that contains only one lattice point is called a primitive unit cell, which is made up from the lattice points at each of the corners.

There are two types of unit cells: primitive and non- primitive. A unit cell that contains only one lattice point is called a primitive unit cell, which is made up from the lattice points at each of the corners.

In case of non-primitive unit cells, there are additional lattice points, either on a face of the unit cell or with in the unit cell. 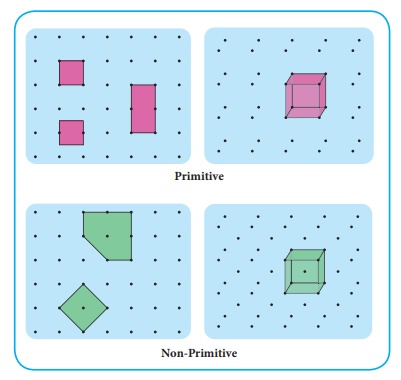 There are seven primitive crystal systems; cubic, tetragonal, orthorhombic, hexagonal, monoclinic, triclinic and rhombohedral. They differ in the arrangement of their crystallographic axes and angles. Corresponding to the above seven, Bravis defined 14 possible crystal systems as shown in the figure. 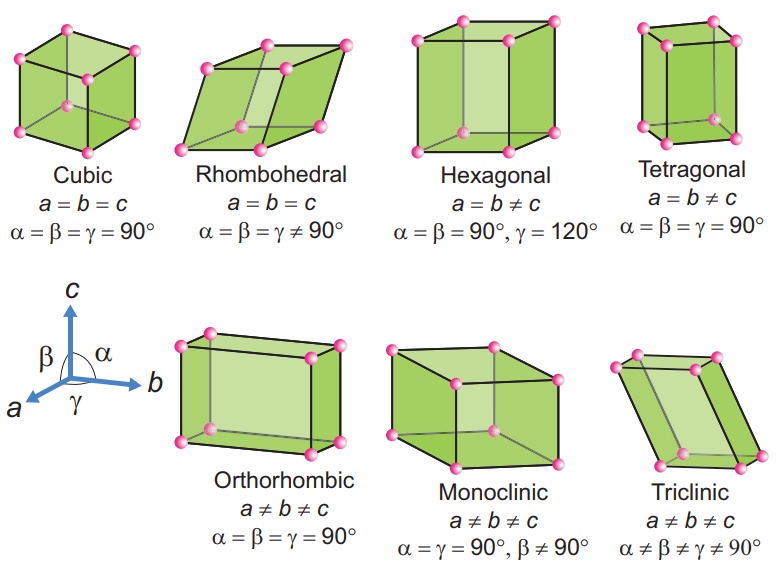 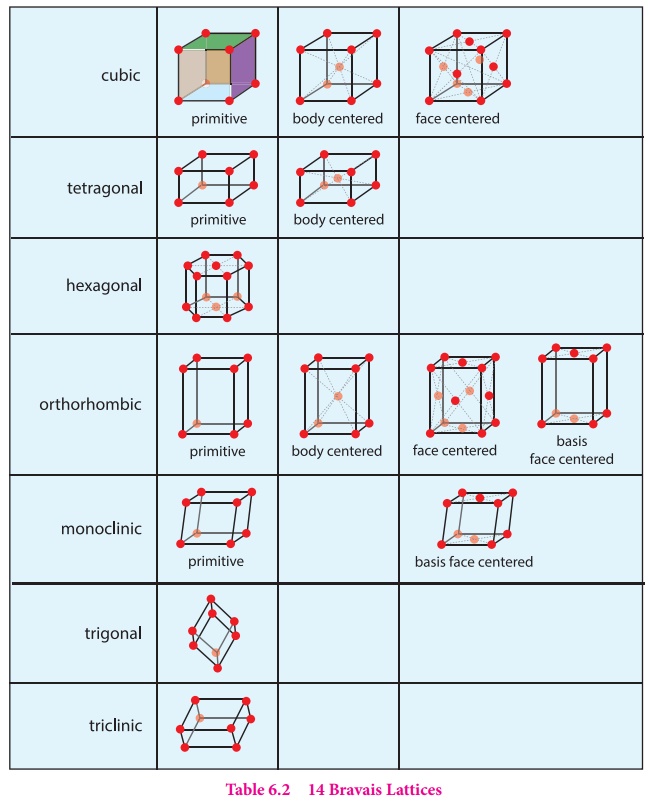 Number of atoms in a cubic unit cell:

In the simple cubic unit cell, each corner is occupied by an identical atoms or ions or molecules. And they touch along the edges of the cube, do not touch diagonally. The coordination number of each atom is 6. 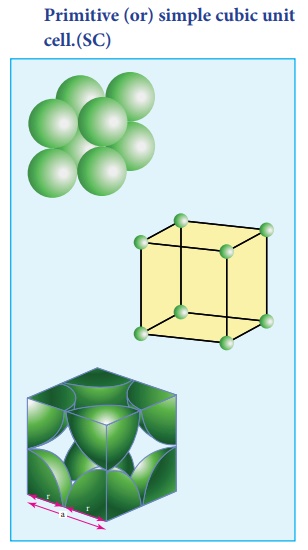 Each atom in the corner of the cubic unit cell is shared by 8 neighboring unit cells and therefore atoms `per unit cell is equal to Nc/8 , where Nc is the number of atoms at the corners. 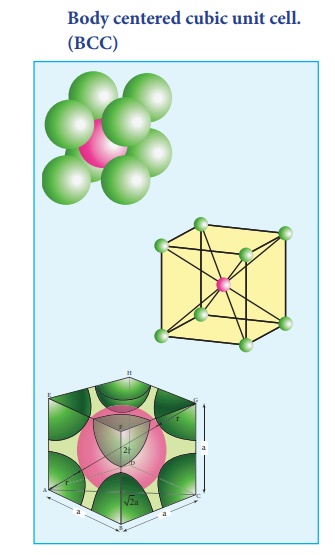 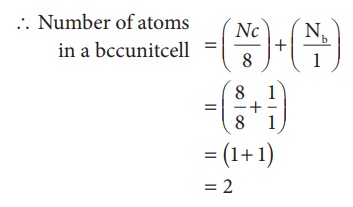 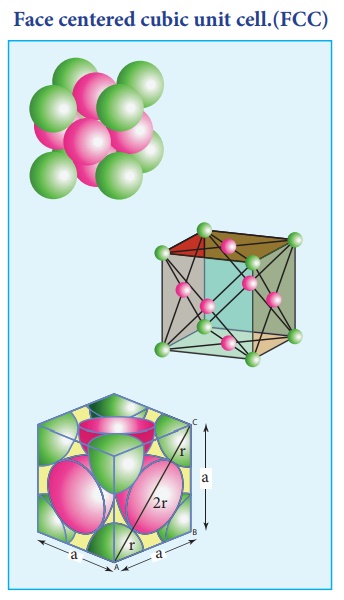 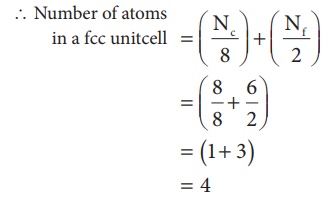 Drawing the crystal lattice on paper is not an easy task. The constituents in a unit cell touch each other and form a three dimensional network. This can be simplified by drawing crystal structure with the help of small circles (spheres) corresponding constituent particles and connecting neighbouring particles using a straight line as shown in the figure.

X-Ray diffraction analysis is the most powerful tool for the determination of crystal structure. The inter planar distance between two successive planes of atoms can be calculated using the following equation form the X-Ray diffraction data 2dsinθ = nλ

The above equation is known as Bragg’s equation.

λ is the wavelength of X-ray used for diffraction.

θ is the angle of diffraction

By knowing the values of θ, λ and n we can calculate the value of d.

Using these values the edge of the unit cell can be calculated.

Using the edge length of a unit cell, we can calculate the density ( ρ ) of the crystal by considering a cubic unit cell as follows. 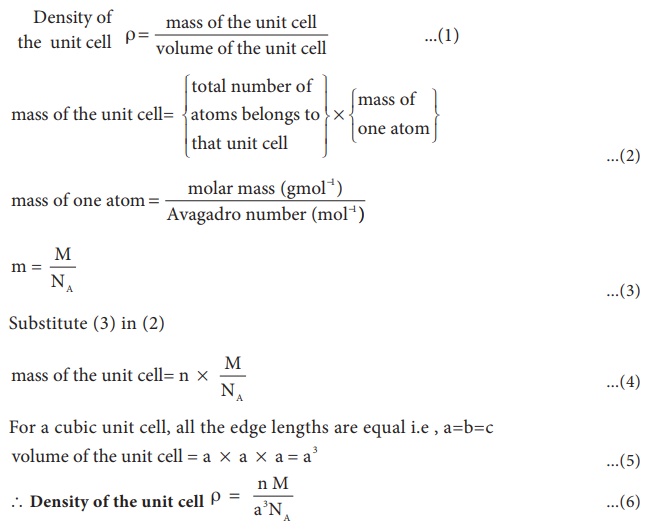 Equation (6) contains four variables namely ρ , n , M and a . If any three variables are known, the fourth one can be calculated.

Barium has a body centered cubic unit cell with a length of 508pm along an edge. What is the density of barium in g cm-3? 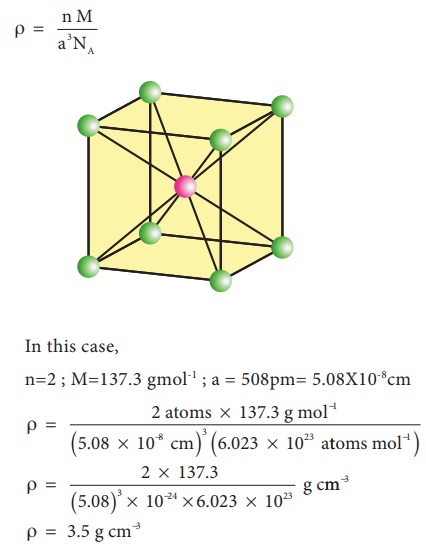