Social Issues and the Environment

SOCIAL ISSUES AND THE ENVIRONMENT

Developing and modernizing the technologies without losing our sound traditional values and practices is essential.

Meeting the needs of the present, without compromising the ability of future generations, to meet their own needs.

Optimum use of natural resources with high degree of reusability, minimum wastage, least generation of toxic byproducts and maximum productivity.

·        Providing environmental education and awareness – changing attitude of the people

The process of saving water for future utilization. 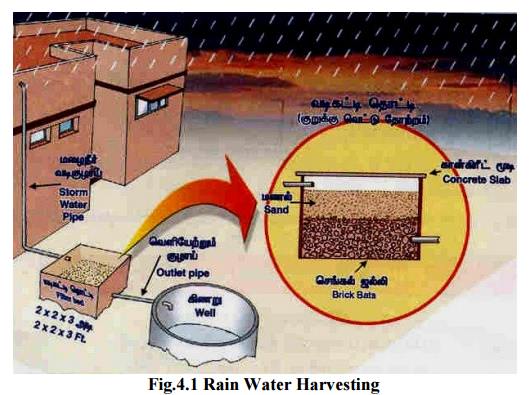 ü   Over exploitation of ground water

Ø   Preventing of wastage of water

Rain water harvesting- A technique of capturing and storing of rain water for further utilization.

– The management of rainfall and resultant run-off.

To minimize of risk of floods

For improving the economy

To protect soil from erosion.

4 RESETTLEMENT AND REHABILITATION OF PEOPLE

·        Due to Developmental activities

ü   Loss of identity between the people.

Refers to the issues, principles and guidelines relating to human interactions with their environment.

v   Pollution due to effluent and smoke

Ø   Recycle and reuse of waste products

The average weather of an area.

·        Upsetting the hydrological cycles results in floods and droughts 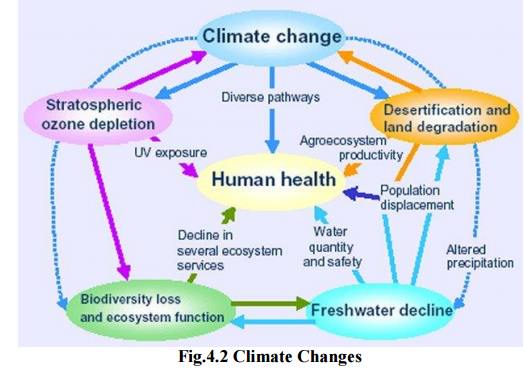 The progressive warming of earth surface due to blanketing effect of man made CO2 in the atmosphere. 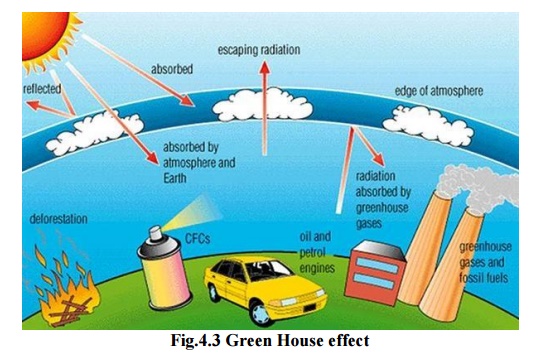 The precipitation of CO2, SO2, and NO2 gases as pollutants in water. 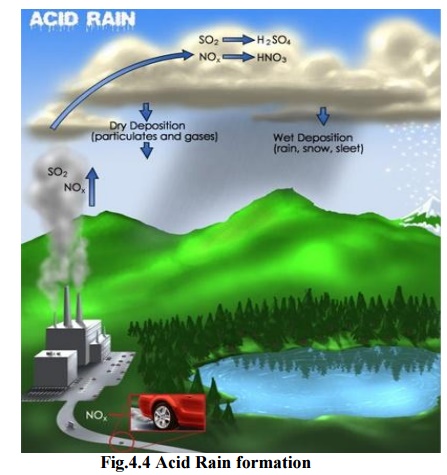 3. On terrestrial and Lake Ecosystem

ü   Liming of lakes and soils.

Ozone is formed in the stratosphere by photo - chemical reaction. 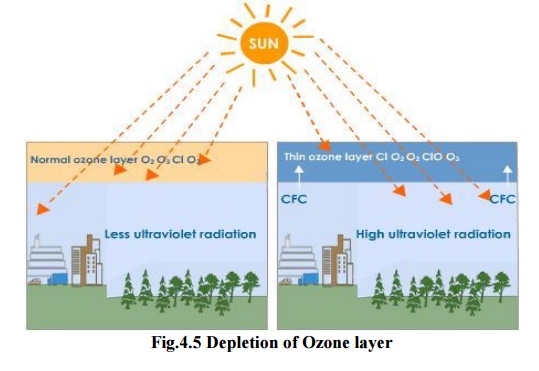 v   On climate – increasing the average temperature of the earth surface. 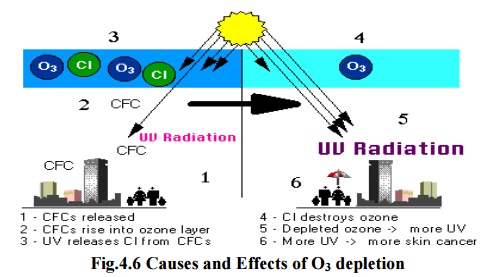 The release of large amounts of nuclear energy and radioactive products into the atmosphere. Nuclear energy was researched by man as an alternate source of energy compared to fossil

fuels. Although this did happen along with the benefits came its downfall. In the short history of nuclear energy there has been a number of accidents that have surpassed any natural calamity. A single nuclear accident causes loss of life, long term illness and destruction of property on a large scale.

The careless siting of industries and relatively poor regulatory controls leads to ill health in the.The Bhopal gas tragedy on December 2nd 1984, where Union Carbide's Plant leaked 43 tons of Methyl Isocynate and other substances, used in the manufacture of pesticides is one of the worst industrial accidents in the recent past. Of the 5,20,000 people who were exposed to the gas - 8,000 died during the first week and another 8,000 later. The impact of the survivors is visible even today. 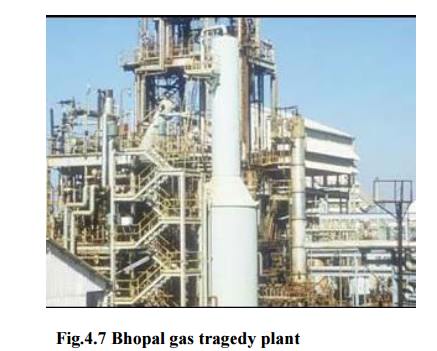 On April 25, 1986, Russian engineers and scientists begin preliminary tests on Chernobyl power plant's 4th reactor. In order to control the experiment, the automatic control system was shut down. After some work, stability was reached at very low power outputs. Unfortunately, manual control of the water pressure wasn't maintained. The reactor began to create excess heat. Without the automatic control, the control rods couldn't be reinserted in time; a deadly chain reaction had begun. Within a matter of 3-4 seconds, the reactor went from 5% output to 100 times its normal level. The water in the reactor flash-boiled, creating an explosion that leveled thousands of tons of concrete and steel, including the housing for the reactor. The steam carried almost 70% of the nuclear material out of the reactor into the surrounding environment. Several thousand volunteers died on the scene, and it is estimated that 7,000 to 10,000 volunteers died in total, considering short and long-term effects. Thousands of miles from the scene, the birth defect rate became double the world average. It is also estimated that 150,000 were put at risk for thyroid cancer, and over 800,000 children were put at risk of  contracting leukemia. 2 million acres of land (1/5 of the usable farmland in the Ukraine) was, and still is, completely unusable. It remains difficult to determine the scope of the disaster; radiation resulting from the event was detected all over the globe. It is estimated that it may cost up to $400 billion and will take up to 200 years to correct the damage done to the area, and to compensate those affected by the meltdown. 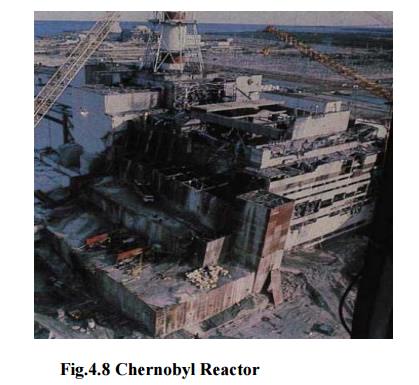 Ø   Ignition of all combustible material 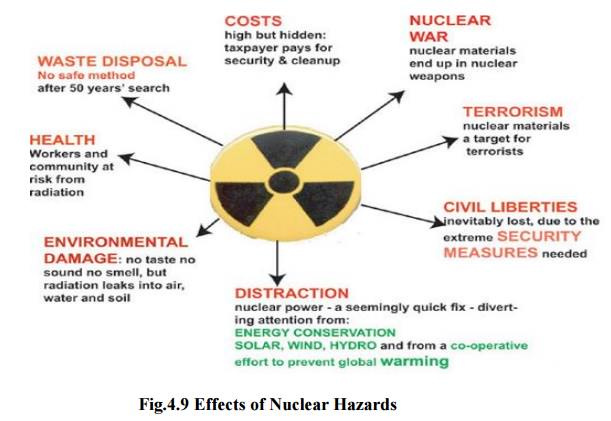 Ø   Constant monitoring of the radiation level

Ø   Checks and control measures done by Atomic Energy Regulatory Board.

Waste land: - The land which is not in use – unproductive, unfit for cultivation another economic uses.

v   Excessive use of pesticides.

·        To improve the physical structure and quality of the soil

·        To avoid over – exploitation of natural resources

·        Right to buy, right to expect the product to perform as claimed

9.6 Important information to be known by buyers

Improves rights and power of the buyers

Reuse and recycle the product

v   Water Act 1974, 1978- An Act to provide for the levy and collection of water consumed by persons carrying on certain industries and by local authorities, with a view to augment the resources of the Central Board and the State Boards for the prevention and control of water pollution constituted under the Water (Prevention and Control of Pollution) Act, 1974.

v   Water amendment Act 1987- As a result, some of the basic principles of water law applicable today in India derive from irrigation acts. The early Northern India Canal and Drainage Act, 1873 sought, for instance, to regulate irrigation, navigation and drainage in Northern India.

flowing in natural channels, and of all lakes. The 1873 act refrained from asserting state ownership over surface waters. Nevertheless, this act is a milestone since it asserted the right of the Government to control water use for the benefit of the broader public.

o   This was progressively strengthened. Thus, the Madhya Pradesh Irrigation Act, 1931 went much further and asserted direct state control over water: ‘All rights in the water of any river, natural stream or natural drainage channel, natural lake or other natural collection of water shall vest in the Government.

v   Air Act 1981- An Act to provide for the prevention, control and abatement of air pollution, for the establishment, with a view to carrying out the aforesaid purposes, of Boards, for conferring on and assigning to such Boards powers and functions relating thereto and for matters connected therewith.

v     Wild life Act 1972-It refers to a sweeping package of legislation enacted in 1972 by the Government of India. Before 1972, India only had five designated national parks. Among other reforms, the Act established schedules of protected plant and animal species; hunting or harvesting these species was largely outlawed. The Act provides for the protection of wild animals, birds and plants; and for matters connected therewith or ancillary or incidental thereto. Formalization of national parks, wildlife sanctuaries, conservation reserves and community reserves. Protection to habitat and wildlife within premises of such protected areas. Development of National Board for Wildlife and State Boards for Wildlife for identification of future protected areas. Up to April 2010 there have been 16 convictions under this act relating to the death of tigers.

Stating that: No State Government or other authority shall make any order directing-

(i) that any reserved forest shall cease to be reserved;

(ii) that any forest land or any portion thereof may be used for any non-forest purpose;

(iii) that any forest land or any portion thereof may be assigned by way of lease or otherwise to any private person or to any authority, corporation, agency or any other organization not owned, managed or controlled by Government;

(iv)that any forest land or any portion thereof may be cleared of trees which have grown naturally in that land or portion, for the purpose of using it for reafforestat.

Our environment is presently degrading due to many activities like pollution, deforestation, overgrazing, rapid industrialization and urbanization.

To learn to live simple and eco-friendlily manner.

ü   In schools and colleges