It is defined as the geological process and it is an event concentrated in time and space in which a society or subdivision of a society undergoes severe danger and causes loss of its members and physical property.

It is a perceived natural event which threatens both life and property.

ü   A disaster is the realization of this hazard

ü   It is defined as the geological process and it is an event concentrated in time and space in which a society or subdivision of a society undergoes severe danger and causes loss of its members and physical property.

Whenever the magnitude of water flow exceeds the carrying capacity of the channel within its banks the excess of water overflows on the surroundings causes floods.

Ø   Sudden and excess release of impounded water behind dams

Ø   Clearing of forests for agriculture has also increased severity of floods.

·        Diverting excess water through channels or canals to areas like lake, rivers where water is not sufficient.

·        Optical and microwave data from IRS is also used for flood management.

·        Flood forecasts and flood warning are also given by the central water commission.

It is a meteorological process, intense depressions forming over the open oceans and moving towards the land.

Cyclone is measured by Saffir-Simpson scale. 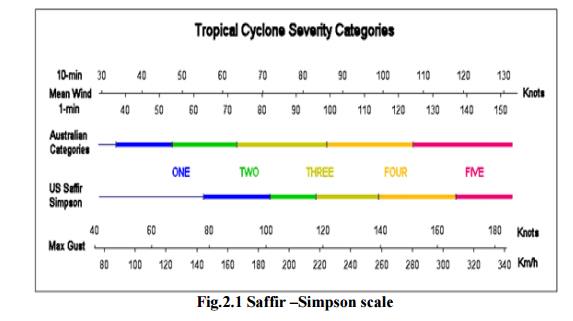 ü   The damage depends on the intensity of cyclone the damage to human life, crops, roads, transport, could be heavy.

ü   Cyclone occurrence slows down the developmental activities of the area.

Table 2.1 Classification of cyclones based on their speed

Ø   Satellite images are used by meteorological departments for forecasting the weather conditions which reveal the strength and intensity of the storm.

Ø   Radar system is used to detect the cyclone and is being used for cyclone warning.

ü   Two cyclones in Orissa occurred on 18th and 29th October 1999.In the coastal area of Orissa, a powerful cyclone storm hit with a wind velocity of about 260 km/hr. Nearly 14-30 districts of Orissa were in severe damage.

ü   It has been reported that nearly 15 millions of people were affected and 90-95% of the crop yield was affected. About 11,500 local schools have been damaged.

The movement of earthy materials like coherent rock, mud, soil and debris from higher to lower region to gravitational pull is called land slides.

v   Movement of heavy vehicles on the unstable sloppy regions.

1. Block roads and diverts the passage.

An earthquake is a sudden vibration caused on earth surface with the sudden release of tremendous energy stored in rocks under the earth’s crust.

1. Disequilibrium in any part of the earth crust

2 Severity of an earthquake:

Generally it is measured by its magnitude on Richter scale.

·        Damage the settlements and transport systems

·        Collapses houses and their structures

ü   Seismic hazard map should give the information about the magnitude of intensity of anticipated earthquakes.

A tsunami is a large wave that is generated in a water body when the seafloor is deformed by seismic activity. This activity displaces the overlying water in the ocean.

v   Deformation of the sea floor due to the movement of plates. 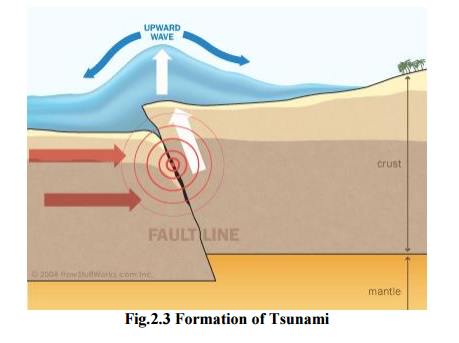 ü   Earthquakes under the water are monitored by sensors on the floor of the sea.

ü   The sensors send the information of floating buoys on the surface, whenever they detect any changes in pressure of the sea.

ü   The information is then relayed to satellites, which passes it on to the earth stations.

ü   Finally the country make the people alert through the media to take all necessary precautions.