Deforestation means destruction of forests. Deforestation rate is relatively less in temperature countries, but it is very alarming in tropical countries.

Deforestation rate is relatively less in temperature countries, but it is very alarming in tropical countries.

Deforestation is a continuous process in India where about 3.3 hectares of forest land has been lost. The per capita availability of forest in India is 0.08 hectares per person which is much lower than the world average of 0.8 hectares.

The presence of waste land is a sign of deforestation in India.

Major causes of deforestation are listed below:

Some of the effects of deforestation are listed below:

a) Effect on climate

b) Effect on biodiversity

Loss of fruit production Loss of root based foods.

Desertification in hilly regions of the Himalayas:

Desertification in Himalayas, involving clearance of natural forests and plantation of monocultures like Pinus roxburghi, Eucalyptus camadulensis etc., have upset the ecosystem by changing various soil and biological properties.

The area is invaded by exotic weeds. These areas are not able to recover and are losing their fertility.

Following the destruction of forest rain fall declined in Chhota Nagpur to such an extent that tea-gardens also disappeared from the region.

The rainfall pattern was found to fluctuate with wooded land area in the hills. When the Nilgiri mountains had luxuriant forest cover annual rainfall used to be much higher.

Logging for valuable timber such as teak and mahogany not only involves a few large trees per hectare but about a dozen more trees since they are strongly interlocked with each other by vines etc.

Also road construction for making approach to the trees causes further damage to the forests.

In India, firewood demand would continue to rise in future mostly consumed in rural areas, where alternative sources of energy, are yet to reach.

Mining is the process of removing deposits of ores from substantially very well below the ground level.

Mining is carried out to remove several minerals including coal.

These mineral deposits invariably found in the forest region, and any operation of mining will naturally affect the forests.

More than 80,000 ha of land of the country are presently under the stress of mining activities. 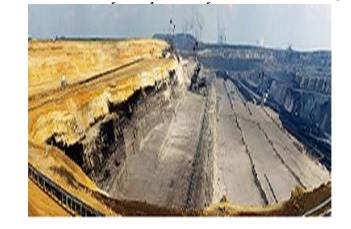 Mining operation require removal of vegetation along with underlying soil mantle and overlying rock masses. This results in destruction of landscape in the area.

Large scale of deforestation has been reported in Mussorie and Dehradun valley due to mining of various areas.

Indiscriminate mining in Goa since 1961 has destroyed more than 50,000 ha of forest land. Mining of radioactive mineral in Kerala, Tamilnadu and Karnataka are posing similar threats of deforestation.

DAMS AND THEIR EFFECTS ON FORESTS AND TRIBAL PEOPLE

Big dams and river valley projects have multi-purpose uses and have been referred to as "Temples of modern India”.

India has more than 1550 large dams, the maximum being in the state of Maharashtra (more than 600) followed by Gujarat (more than 250) and Madhya Pradesh (130).

The highest one is Tehri dam, on river Bhagirathi in Uttaranchal and the largest in terms of capacity is Bhakra dam on river Sutlej.

The greatest social cost of big dam is the widespread displacement of local people.

It is estimated that the number of people affected directly or indirectly by all big irrigation projects in India over the past 50 years can be as high as 20 millions.

The Hirakud dam, one of the largest dams executed in fifties, has displaced more than 20,000 people residing in 250 villages.

Thousands of hectares of forests have been cleared for executing river valley projects which breaks the natural ecological balance of the region. Floods, landslides become more prevalent in such areas.

The Tehri dam submerged 1000 hectares of forest affecting about 430 species of plants according to the survey carried out by the botanical survey of India.