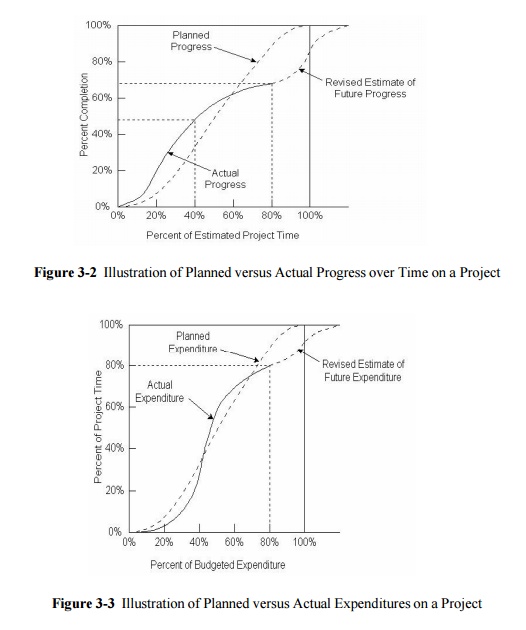 In addition to cost control, project managers must also give considerable attention to monitoring schedules.

In addition to cost control, project managers must also give considerable attention to monitoring schedules. Construction typically involves a deadline for work completion, so contractual agreements will force attention to schedules. More generally, delays in construction represent additional costs due to late facility occupancy or other factors. Just as costs incurred are compared to budgeted costs, actual activity durations may be compared to expected durations. In this process, forecasting the time to complete particular activities may be required.

The methods used for forecasting completion times of activities are directly analogous to those used for cost forecasting. For example, a typical estimating formula might be:

where Df is the forecast duration, W is the amount of work, and ht is the observed productivity to

time t. As with cost control, it is important to devise efficient and cost effective methods for gathering information on actual project accomplishments. Generally, observations of work completed are made by inspectors and project managers and then work completed is estimated as described in Section 12.3. Once estimates of work complete and time expended on particular activities are available, deviations from the original duration estimate can be estimated. The calculations for making duration estimates are quite similar to those used in making cost estimates in Section 133.

For example, Figure 3.2 shows the originally scheduled project progress versus the actual progress on a project. This figure is constructed by summing up the percentage of each activity which is complete at different points in time; this summation can be weighted by the magnitude of effort associated with each activity. In Figure 3-2, the project was ahead of the original schedule for a period including point A, but is now late at point B by an amount equal to the horizontal distance between the planned progress and the actual progress observed to date.

Schedule adherence and the current status of a project can also be represented on geometric models of a facility. For example, an animation of the construction sequence can be shown on a computer screen, with different colors or other coding scheme indicating the type of activity underway on each component of the facility. Deviations from the planned schedule can also be portrayed by color coding. The result is a mechanism to both indicate work in progress and schedule adherence specific to individual components in the facility 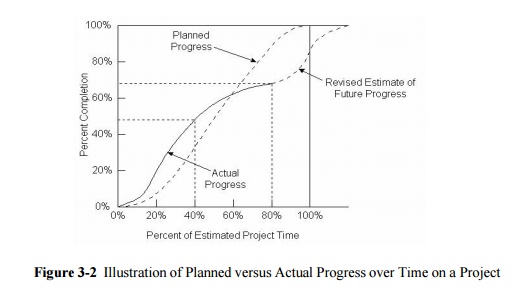 In evaluating schedule progress, it is important to bear in mind that some activities possess float or scheduling leeway, whereas delays in activities on the critical path will cause project delays. In particular, the delay in planned progress at time t may be soaked up in activities' float (thereby causing no overall delay in the project completion) or may cause a project delay. As a result of this ambiguity, it is preferable to update the project schedule to devise an accurate protrayal of the schedule adherence. After applying a scheduling algorithm, a new project schedule can be obtained. For cash flow planning purposes, a graph or report similar to that shown in Figure 12-3 can be constructed to compare actual expenditures to planned expenditures at any time. This process of re-scheduling to indicate the schedule adherence is only one of many instances in which schedule and budget updating may be appropriate, as discussed in the next section. 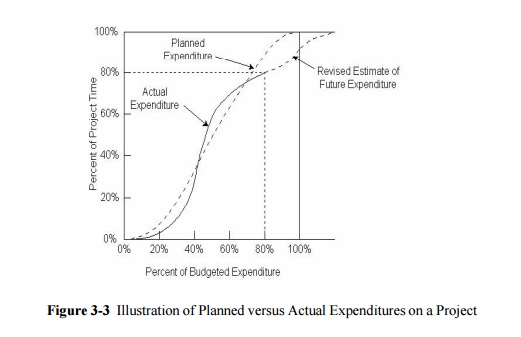