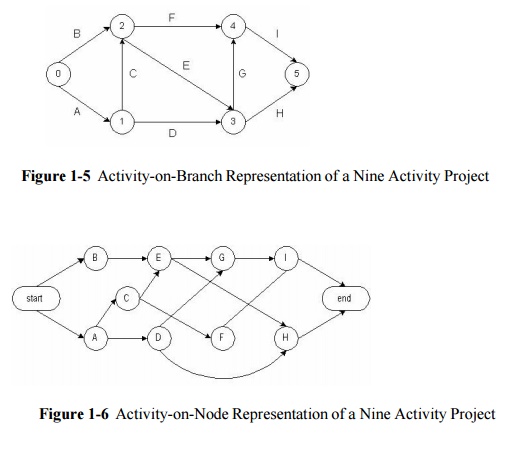 B. Removal of trees,

Activities E (trench excavation) and F (concrete preparation) cannot begin until the completion of general excavation and tree removal, since they involve subsequent excavation and trench preparation. Activities G (install lines) and H (install utilities) represent installation in the utility trenches and cannot be attempted until the trenches are prepared, so that activity E (trench excavation) is a preceding activity. We also assume that the utilities should not be installed until grading is completed to avoid equipment conflicts, so activity D (general grading) is also preceding activities G (install sewers) and H (install utilities). Finally, activity I (pour concrete) cannot begin until the sewer line is installed and formwork and reinforcement are ready, so activities F and G are preceding. Other utilities may be routed over the slab foundation, so activity H (install utilities) is not necessarily a preceding activity for activity I (pour concrete). The result of our planning are the immediate precedences shown in Table 1-1.

Alternatively, the nine activities could be represented by nodes and predecessor relationships by branches or links, as in Figure 1-6. The result is an activity-on-node diagram. In Figure 9-6, new activity nodes representing the beginning and the end of construction have been added to mark these important milestones.

It is also notable that Table 1-1 lists only the immediate predecessor relationships. Clearly, there are other precedence relationships which involve more than one activity. For example, "installing sewer lines" (activity G) cannot be undertaken before "site clearing" (Activity A) is complete since the activity "grading general area" (Activity D) must precede activity G and must follow activity A. Table 1-1 is an implicit precedence list since only immediate predecessors are recorded. An explicit predecessor list would include all of the preceding activities for activity G. Table 1-2 shows all such predecessor relationships implied by the project plan. This table can be produced by tracing all paths through the network back from a particular activity and can be performed algorithmically. For example, inspecting Figure 1-6 reveals that each activity except for activity B depends upon the completion of activity A.