Salinity of the ocean

Salinity is defined as the ratio between the weights of dissolved salts (in grams) per 1000 grams of water.

Salinity of the ocean

Salinity is defined as the ratio between the weights of dissolved salts (in grams) per 1000 grams of water. It is expressed as part per thousand (‰) and has no units. Example: 30‰ means 30 grams in 1,000 grams of sea water. The average ocean salinity is 35‰.

Sources of salt in the ocean: Sea water is a weak but complex solution made up of many things including mineral salts and decayed biological marine organisms. Most of the ocean salts are derived from weathering and erosion of the earth’s crust by the rivers. Some of the ocean salts have been dissolved from rocks and sediments below the sea floor, while others have escaped from the earth’s crust through volcanic vents as solid and gaseous materials.

Depth of water is measured in the unit ‘Fathom’. One fathom is equal to 1.8 metre (six feet)

The salinity of ocean water depends upon

5.        Upwelling of deep water initiated by prevailing winds and

On an average the salinity decreases from equator towards the poles. The highest salinity is observed between 20° and 40° north latitudes because this zone is characterized by high temperature, high evaporation but less rain than the equatorial region. 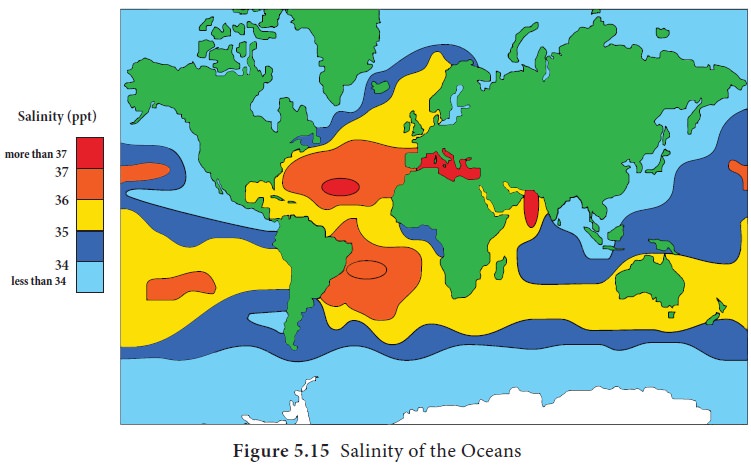 Compare the salinity of Arabian Sea and Bay of Bengal and find the reason for the same.

Find out the reason for low salinity on east coast of Asia and West coast of North America.(Figure 5.15)

Why does the salinity vary along the west coast of South America?

Isohaline is an imaginary line drawn to join places having equal salinity.