Oceans of the world

1. The Pacific Ocean 2. The Atlantic Ocean 3. The Indian Ocean 4. The Southern Ocean 5. The Arctic ocean

Oceans of the world 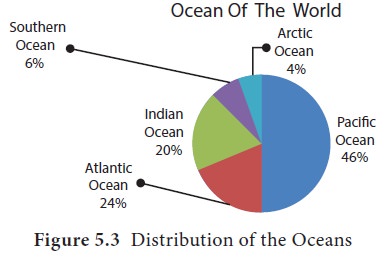 Pacific Ocean is the largest ocean in the world. It is bigger than all continents put together. Portuguese explorer Ferdinand Magellan in 1521 named the ocean Pacific Ocean meaning ‘peaceful’ because he felt the ocean to be calm after sailing from the Atlantic Ocean through the stormy and dangerous Strait of Magellan. Average depth of this ocean is 4,280 meters.

The Suez Canal, an artificial sea-level waterway in Egypt, connecting the Mediterranean Sea to the Red Sea through the Isthmus of Suez was officially opened on November 17, 1869.

The Indian Ocean is the third-largest in the world. It is named after India. Its calm open water has encouraged the sea trade earlier than the Atlantic or the Pacific Ocean.

The Southern  Ocean  is the  world’s fourth largest  ocean. The Southern Ocean is the youngest ocean and was formed 30 million years ago when South America moved away from Antarctica, opening the Drake Passage (Figure 5.4). This ocean has the boundary where cold, northward flowing water from the Antarctic mixes with warmer sub Antarctic water. During summer in southern hemisphere over half of the Southern Ocean  is covered with ice and icebergs.

The Arctic Ocean is shallower and smaller than the other four oceans. It is completely surrounded by Eurasia and North America. It is covered by ice completely in winter. The Arctic Ocean’s surface temperature and salinity vary seasonally as the ice cover melts and freezes alternatively. Its salinity is the lowest on an average of the five major oceans. Bering Strait connects the Arctic Ocean with the Pacific Ocean while the Greenland Sea and the Labrador Sea connects it with the Atlantic. The deepest point is Litke Deep in the Eurasian Basin, at 5,450 m. 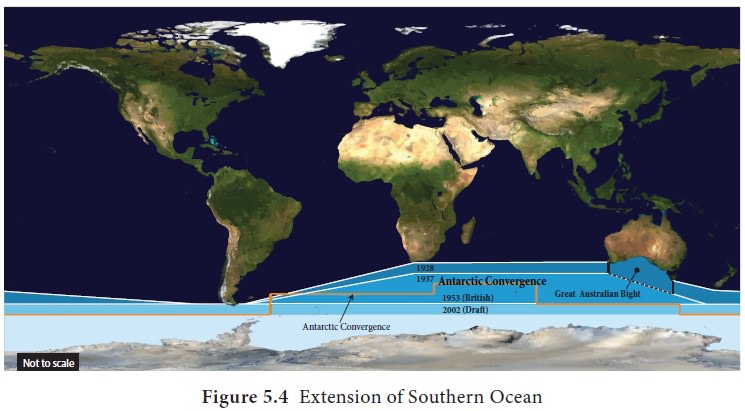