The bottom of the ocean has a variety of landforms just as it is seen on the earth’s surface.

The bottom of the ocean has a variety of landforms just as it is seen on the earth’s surface. There are large mountain ridges, deep depressions, flat plains, basins and volcanoes. The configuration of an ocean floor is shown with the help of a  ‘Hypsometric curve’ or ‘Hypsographic curve’. It is a graph denoting the proportion of a landmass standing above or below the sea level (Figure 5.7).

Continental shelf is the seaward extension of land that lies under the sea water. It occupies 7% of the sea floor. The continental shelf slopes gently away from the land and is covered with shallow seas with an average depth of 200 fathoms.

The width of the continental shelf varies according to the nature of the rock beneath the crust. If the crust is dynamic then the shelf would be narrow and vice versa. Continental shelves are formed due to either any one or combination of the factors like fluvial deposits, marine erosion, tectonic forces, and the fluctuations in sea level in the past. Continental shelves are well known for oil, natural gas, mineral deposits and coral reefs. World famous fishing grounds like Grand Bank are situated here. The world’s widest continental shelf (1210 km long) is located along the coast of Siberia, in Russia.

The area between the continental slope and the sea floor is known as the continental rise. This part is noted for the accumulation of sediments similar to the alluvial fans near the foot hills in the land. It represents the boundary between continents and abyssal plain. It constitutes about 5% of the oceanic area.

The Abyssal plain is the vast area of flat terrain in the bottom of the oceans. It is the largest part of ocean relief covering more than 50% of the total area. 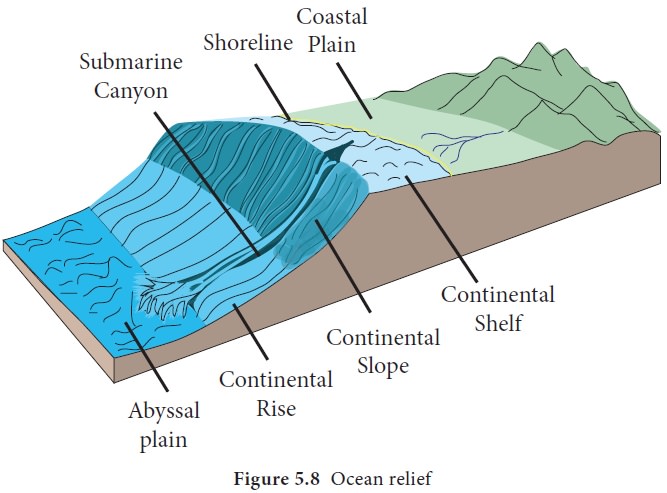 There is an accumulation of very fine sediments on the floor. The sediments are combinations of fine particles of clay and microorganisms. As in the case of sedimentary rocks of earth’s surface these sediments are in layers and are used to trace geological events in the past.

The mid-ocean ridges are submarine mountains. They are continuous and are connected to form a single global mid-oceanic ridge system. They are formed by the tectonic forces acting from within the earth. Mid oceanic ridges are located on the divergent plate boundaries where magma flows through the fissure to form new oceanic crust. They form the longest mountain range in the world extending for more than 56,000 km long and has a maximum width of 800–1,500 km.

The long, narrow, steep-sided depressions formed by tectonic forces beneath the abyssal plain are called Ocean trenches. Oceanic trenches actually extend 3 to 4 km below the level of the abyssal plain. There are 26 oceanic trenches in the world: 22 in the Pacific Ocean, 3 in the Atlantic Ocean and only one in the Indian Ocean. The Challenger Deep in the Mariana Trench, (10,994 m) in the Pacific Ocean is the deepest part of the earth. A trench forms along the convergent boundary where one plate subducts below the other (Figure 5.9).

An island is a landmass surrounded by water on all sides. Islands may be formed on the continental shelf or as oceanic islands. Most of the oceanic islands are volcanic in origin. Group of islands formed by subduction of ocean plate are known as archipelago. Islands of Japan form an archipelago. 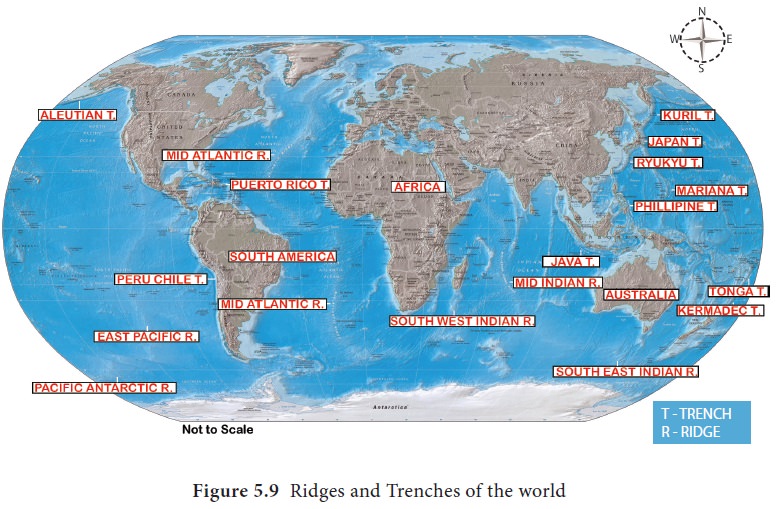 Marine organisms, the coral polyps colonize the tropical warm water and form islands known as coral islands. Lakshadweep Island in Indian Territory is made of corals. Andaman Nicobar islands are of volcanic origin.

Flat topped volcanic hills submerged under the seawater are called guyots. It is a part of an underwater chain of volcanic mountains produced by slow plate movement.

Seamounts are conical, volcanic hills submerged under ocean water. It does not reach to the water’s surface. It is an isolated rise with an elevation of thousand metres or more from the surrounding sea floor and with a limited summit area. It occupies 4.39 percent of ocean region. Seamounts and guyots are most abundant in the North Pacific Ocean.

Continental shelf of the Eastern Pacific Ocean is very narrow due to the presence of trenches while those on the western coast are wide. Continental shelf adjoining coasts of Australia and Indonesia varies in width from 160 to 1,600 km. In the Pacific Ocean, the abyssal plains are very vast. Absence of mid oceanic ridges is the main reason for deep sea plains. Prominent submarine ridges of the Pacific Ocean are Albatross plateau, Cocas ridge and Aleutian ridge. Tasmania basin (New Zealand ) and east pacific basin are major basins of Pacific Ocean. Pacific Ocean has about 25,000 islands. There are number of archipelagos both in north and south Pacific Ocean. The Hawaii islands were formed by hotspot. The challenger deep in Mariana trench is the deepest part of Pacific Ocean (10994m). 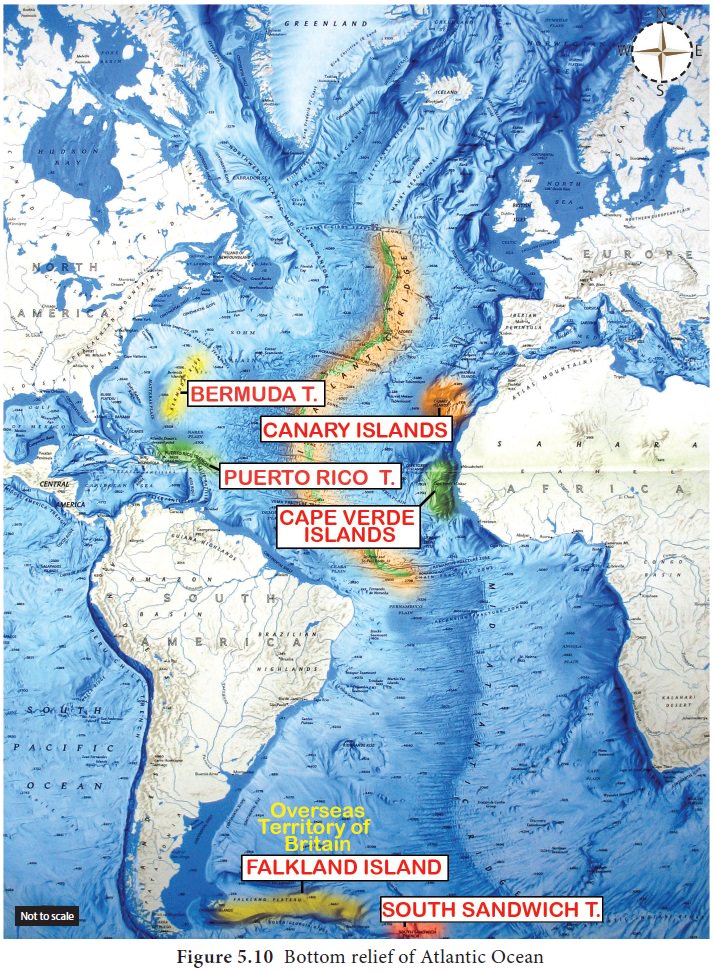 The West Indies is an island archipelago near the main land of North America. British Isles and Newfoundland are famous islands, formed on the continental shelf in the North Atlantic Ocean. Sandwich island, Georgia Island, Falkland and Shetland islands are islands in the South Atlantic Ocean.

Bottom Relief of the Indian Ocean 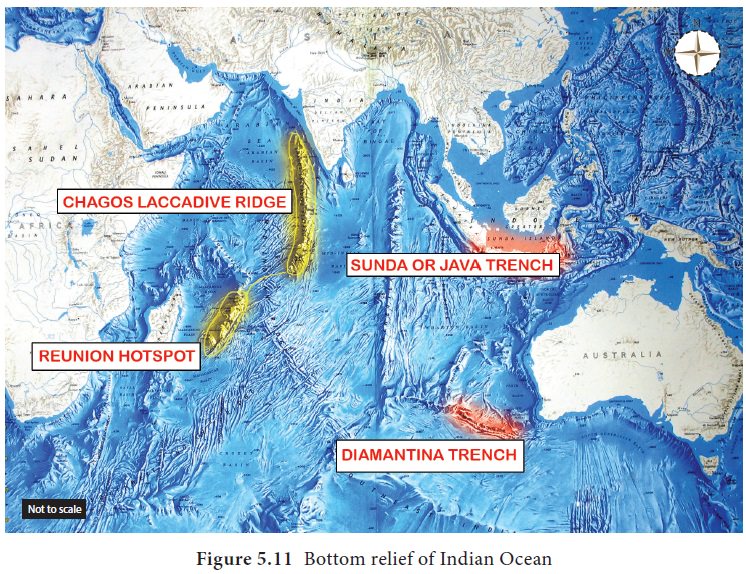 The average depth of the Indian Ocean is 3890m. Sunda deep near Java is the deepest part of this ocean (7450m). Madagascar and Sri Lanka are the most prominent islands present in Indian Ocean. Andaman and Nicobar islands in the Bay of Bengal are the raised part of mountains that are the extension of Arakan Yoma which forms a part of Himalayas. Reunion Island is located on a Hot spot.

Indian National Centre for Ocean Information Services (INCOIS) with its Marine Satellite Information Services uses the remotely sensed sea surface temperature (SST) to identify the locations of fish aggregation. The details of the Potential Fishing Zones (PFZ) are then disseminated to the fishermen once in every three days along the Indian Coast by displaying the details in the Lighthouse in their respective regional language (Figure 5.6).

Ocean deep is grouped into two categories based on their size.