Cryosphere includes the water in frozen state. Glaciers, ice sheets, ice caps, lake and river ice, permafrost, seasonal snow and ice crystals in the atmosphere together form cryosphere. Earth’s climate is highly influenced by the extent of cryosphere as it controls the energy budget of the earth (Figure 5.2). 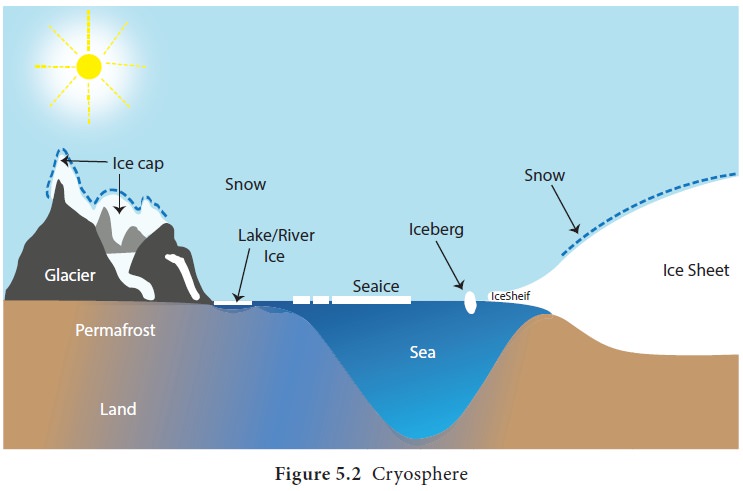 Perennial ice cover is found in Greenland and Antarctica as ice sheets, as mountain glaciers and as permafrost in higher latitudes. Permafrost is the condition prevailing when water freezes above and below the ground, (including rock or soil) for more than two consecutive years. Most permafrost regions are located in high latitudes, but alpine permafrost may exist at high mountains in much lower latitudes.

Mount Kilimanjaro (5895m) in Tanzania, Africa, located closer to the equator has permafrost.

Seasonal snow and ice crystals are confined to middle latitudes and high mountains in lower latitude. Sea ice is frozen ocean water. Its formation, growth and melting are all confined to the ocean. An ice shelf is a thick, floating slab of ice that forms where a glacier or ice flows down a coastline.

The world’s largest ice shelves are the Ross Ice Shelf and the Filchner-Ronne ice shelf in Antarctica. An iceberg is ice floating in open water that has broken off from glaciers or ice shelf.

Interaction of cryosphere with other spheres

Cryosphere is a climate indicator. Cryosphere with its high albedo influences the energy balance of the whole planet. Changes in cryosphere will alter land cover, surface temperature, soil moisture, air temperature, radiation, air circulation, clouds, precipitation, sea level, sea surface temperature, salinity, ocean current, fauna, flora and microbes. There is a complex interaction and balance among the spheres of the earth which makes life to flourish in the earth. If there is a change in one sphere it affects the other spheres as well. Nature maintains this balance. Understanding this complex interactions and living in harmony with nature will help to mitigate the environmental problems faced by the earth.