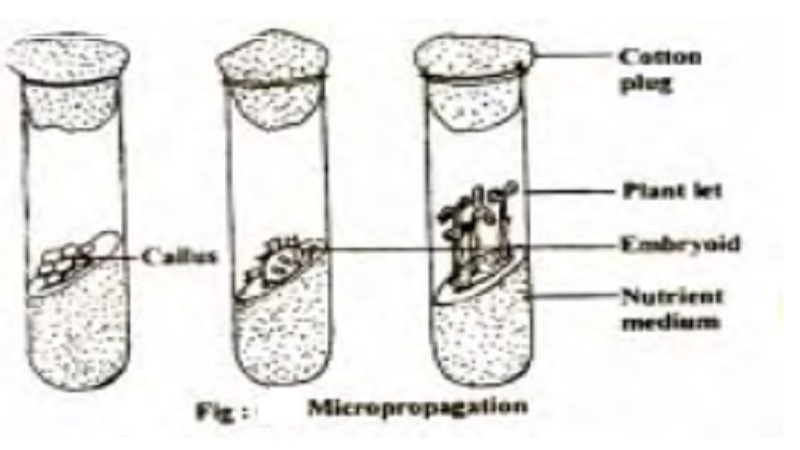 Micro propagation is a rapid method of vegetative multiplication of valuable plant material for agriculture, horticulture and forestry. In this process, a large number of plantlets are produced from a small mass of explanted plant tissue by the tissue and cell culture technique.

Micro propagation is a rapid method of vegetative multiplication of valuable plant material for agriculture, horticulture and forestry. In this process, a large number of plantlets are produced from a small mass of explanted plant tissue by the tissue and cell culture technique. The ability of every living plant cell to produce the entire plant is called totipotency. This is being exploited industrially to multiply plants which are difficult to propagate by conventional means.

In this method, a small segment of explant is cultured in a nutrient medium; the explant may be a meristametic tissue of a stem tip, an inflorescence etc. The explant tissue produces callus during the period of incubation. After the production of enough amount of callus tissue, the callus is sub-cultured in a fresh M.S. Medium containing growth hormones auxin and cytokinin.

Sometimes the callus tissue can be homogenised and the homogenate is directly plated on the medium. The cell masses of the homogenate grow and produce new plantlets.

This process is adapted to produce multiple copies of a desirable plant by making use of shoot tips. The desirable plant is multiplied for being a rare hybrid or a sterile plant with unusual features or for obtaining individual plants of only one sex. In this process multiple buds are formed from the cultured shoot tips without intervention of a callus in response to specific treatments. These buds are grown into shoots and are subsequently induced to produce roots with the rooting hormones. The shoots are then planted in the soil to develop into new plants. The chief advantage of this technique is the large scale cloning of plants throughout the year in a very small space. More examples of micropropagation on a commercial scale have been reported in Potato, Bananas, Begonias, Chrysanthemums, etc.

Somatic cells are cultured in electric shakers to obtain single cell suspensions. After sometime when the number of cells has increased to a maximum depending upon the amount of the nutrient medium, the culture is made stationary. Each cell starts differentiating into an embryo and proceeds through globular heart-shaped and torpedo shaped stages resembling the development of sexually produced embryos. Since these embryos

develop from the somatic calls, they are called as embryoids. Thousands of somatic embryos (embryoids) can be produced in a small volume of the nutrient medium contained in a culture tube. Each of these embryoids can form a complete plant with a normal tap root system. Success has been achieved in Carrot, Celery and Alfalfa.

Micropropagation can be practiced in plants for many reasons

1.       In some plants, seed production may be difficult or impossible. In such cases micro propagation is an effective technique for producing a large number of identical clones.

3.       Sometimes a plant of desirable genotype may be required for planting. In plants like oil palms, identical clones are produced through micropropagation.

4.       It is a standard multiplication method by which all the individuals produced are protected against mutation.

5.       Till 1986, more than sixty species of forest trees were bred by using micro propagation.