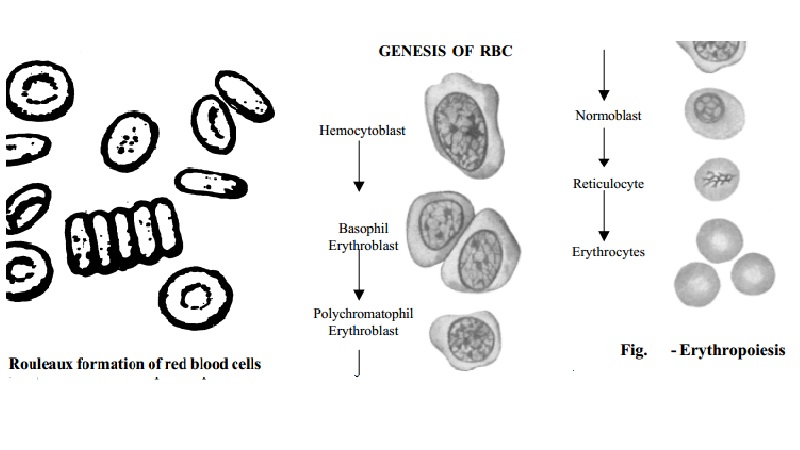 They are also called erythrocytes or R.B.C. They are circular disc-shaped cells possessing no nucleus. The central portion of the cell is much thinner than the circumference. This construction gives the cell a biconcave contour.

They are also called erythrocytes or R.B.C. They are circular disc-shaped cells possessing no nucleus. The central portion of the cell is much thinner than the circumference. This construction gives the cell a biconcave contour. The red cells show a tendency to adhere to one another by their flat surfaces like a pile of coins known as Rouleaux formation.

The R.B.C originate in bone marrow. There are about 5 million red cells in each cubic millimeter of blood. They contain a red pigment called haemoglobin. It constitutes about 33 percent of the cell volume and is responsible for the red colour of the blood. The haemoglobin molecules consist of protein called globin and a pigment called haem

which contains iron. It has an affinity for oxygen and combines with it forming oxy-haemoglobin in the red cells. By means of this function, oxygen is carried to the tissues from the lungs.

The amount of haemoglobin present in normal blood is about 15 grams per 100 ml of blood. The decrease of haemoglobin in the blood results in anaemia.

The formation of red blood cells is called erythropoiesis. The red blood cells are produced in the bone marrow and are derived from a cell known as hemocytoblast. The hemocytoblast passes through several stages of development, becoming first a basophil erythroblast. Then a polychromatophil erythroblast, a normoblast, a reticulocyte and finally an erythrocyte as illustrated in figure 21. During the earlier stages the cells divide many times. There is progressive formation of more hemoglobin. In the normoblastic stage, the nucleus degenerates, becomes very small and forms the reticulocyte. After the release of the reticulocyte from the bone marrow, the cell becomes the mature red blood cell, the erythrocyte. The average life span of an erythrocyte is 120 days.

Erythropoietin - a hormone released by the kidneys in response to hypoxia or low O2 levels acts on the bone marrow to produce more RBC.

Vitamins needed for formation of RBC

Vitamin B12 : Necessary for nuclear maturation and division. Lack of this vitamin inhibits rate of RBC production.

Folic Acid : Folic acid is required for formation of DNA.

Anaemia means a deficiency of red blood cells, which can be caused either by too rapid loss or by too slow production of red blood cells. These are often caused by blood loss, destruction of bone marrow, pernicious anemia because of lack of vitamin B12 or folic acid and hemolysis of red cells, that is rupture of the cells.

Refers to an abnormal increase in the number of red blood cells, i.e. increase of 2 or 3 million cells per cu. mm. of blood are considered to be having polycythemia. This disorder is harmful because the viscosity of the blood is greatly increased due to the extra red blood cells. The viscosity contributes to thrombosis and haemorrhage. It also causes a rise in the blood pressure.