Function and Composition of blood 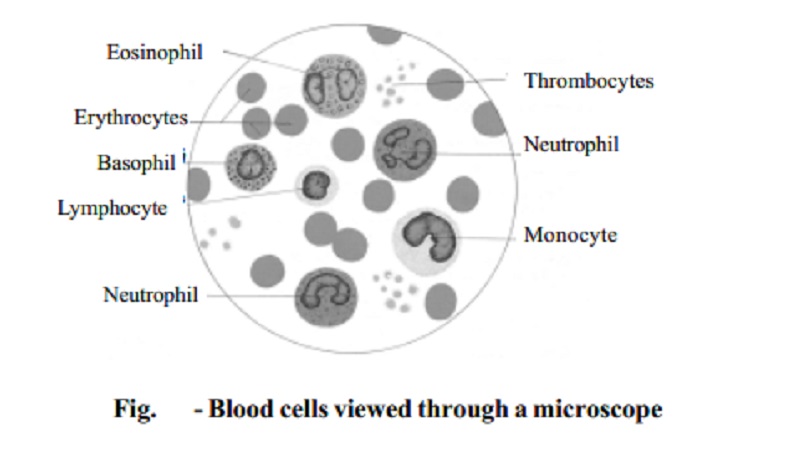 Blood is a fluid tissue found only in the higher animals. It is composed of two parts. The intracellular substance is a straw-coloured fluid called plasma, in which are present the blood cells or corpuscles which performs some important functions. Blood transports:

Blood is a fluid tissue found only in the higher animals. It is composed of two parts. The intracellular substance is a straw-coloured fluid called plasma, in which are present the blood cells or corpuscles which performs some important functions. Blood transports:

Oxygen from the lungs to all cells of the body and carbon dioxide from the cells to the lungs.

Nutrients from the digestive organs to the cells.

Waste products from the cells to the kidneys, lungs and sweat glands.

Hormones from endocrine glands to the cells.

Some of the functions of blood are

Blood regulates normal body temperature because it contains a large volume of water.

It prevents body fluid loss through the clotting mechanism.

The total volume of blood forms about one-twelfth of the weight of the body or about 5 liters. About 55 percent, a little over half the volume is fluid, called plasma and the remaining 45 percent of the volume being made up of the blood cells.

Blood serum or plasma is a straw-coloured liquid. The plasma is composed mainly of water, i.e. 91 percent; and 7 percent of proteins as plasma proteins which have very important functions to perform. Plasma also contains substances like glucose, sodium chloride, sodium bicarbonate, salts of calcium, phosphorous, magnesium and iron, urea, uric acid, cholesterol and amino acids. Plasma also carries gases, oxygen and carbon-di-oxide and the internal secretions like enzymes and antigens.

Prothrombin and fibrinogen take part in the blood clotting mechanism along with the platelets.

These are the formed elements that float in the plasma. There are three types of blood cells namely Red blood cells, White blood cells and platelets.

They are also called erythrocytes or R.B.C. They are circular disc-shaped cells possessing no nucleus. The central portion of the cell is much thinner than the circumference. This construction gives the cell a biconcave contour. The red cells show a tendency to adhere to one another by their flat surfaces like a pile of coins known as Rouleaux formation.

They are also called as W.B.C or Leucocytes These are transparent, not coloured and fewer than the red cells possessing nucleus. There are 8,000 W.B..C. in each cubic millimeter of blood.

They are also termed as thrombocytes. These are small disc-shaped cells without a nucleus about one third the size of the red blood cells. There are about 2 to 5 lakhs of platelets in each cu.mm. of blood. They play an important part in the control of bleeding after injury and in the clotting of blood.