Using depth-first search we can systematically visit each node of the tree that could possibly lead to a least-cost solution.

Using depth-first search we can systematically visit each node of the tree that could possibly lead to a least-cost solution. The simplest formulation of depth-first search uses recursion (see Program 6.4). Later on it will be useful to have a definite order in which the cities are visited in the for loop in Lines 8 to 13, so we’ll assume that the cities are visited in order of increasing index, from city 1 to city n-1.

The algorithm makes use of several global variables:

. n: the total number of cities in the problem

The function City_count examines the partial tour tour to see if there are n cities on the partial tour. If there are, we know that we simply need to return to the hometown to complete the tour, and we can check to see if the complete tour has a lower cost than the current “best_tour” by calling Best tour. If it does, we can replace the current best tour with this tour by calling the function Update_best-tour. Note that before the first call to Depth_first_search, the best_tour variable should be initialized so that its cost is greater than the cost of any possible least-cost tour.

If the partial tour tour hasn’t visited n cities, we can continue branching down in the tree by “expanding the current node,” in other words, by trying to visit other cities from the city last visited in the partial tour. To do this we simply loop through the cities. The function Feasible checks to see if the city or vertex has already been visited, and, if not, whether it can possibly lead to a least-cost tour. If the city is feasible, we add it to the tour, and recursively call Depth_first_search. When 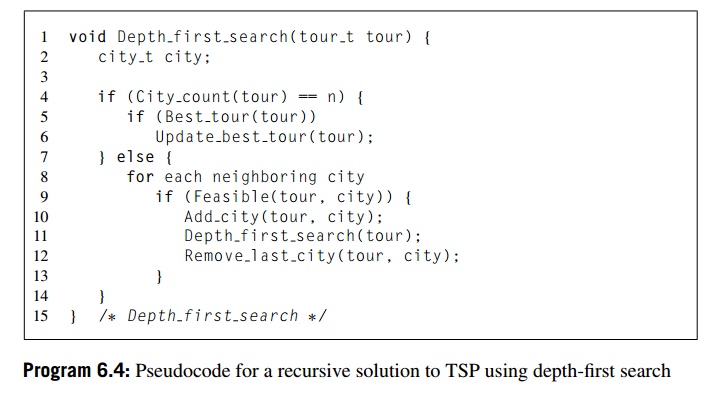 we return from Depth_first_search, we remove the city from the tour, since it shouldn’t be included in the tour used in subsequent recursive calls.
Study Material, Lecturing Notes, Assignment, Reference, Wiki description explanation, brief detail
An Introduction to Parallel Programming : Parallel Program Development : Recursive depth-first search |