In an MPI program that dynamically partitions the search tree, we can try to emu-late the dynamic partitioning that we used in the Pthreads and OpenMP programs.

In an MPI program that dynamically partitions the search tree, we can try to emu-late the dynamic partitioning that we used in the Pthreads and OpenMP programs. Recall that in those programs, before each pass through the main while loop in the search function, a thread called a boolean-valued function called Terminated. When a thread ran out of work—that is, its stack was empty—it went into a condition wait (Pthreads) or a busy-wait (OpenMP) until it either received additional work or it was notified that there was no more work. In the first case, it returned to searching for a best tour. In the second case, it quit. A thread that had at least two records on its stack would give half of its stack to one of the waiting threads.

Much of this can be emulated in a distributed-memory setting. When a process runs out of work, there’s no condition wait, but it can enter a busy-wait, in which it waits to either receive more work or notification that the program is terminat-ing. Similarly, a process with work can split its stack and send work to an idle process.

The key difference is that there is no central repository of information on which processes are waiting for work, so a process that splits its stack can’t just dequeue a queue of waiting processes or call a function such as pthread_cond_signal. It needs to “know” a process that’s waiting for work so it can send the waiting process more work. Thus, rather than simply going into a busy-wait for additional work or termination, a process that has run out of work should send a request for work to another process. If it does this, then, when a process enters the Terminated func-tion, it can check to see if there’s a request for work from some other process. If there is, and the process that has just entered Terminated has work, it can send part of its stack to the requesting process. If there is a request, and the process has no work available, it can send a rejection. Thus, when we have distributed-memory, pseudocode for our Terminated function can look something like the pseudocode shown in Program 6.10.

Before entering the apparently infinite while loop (Line 13), we set the variable work_request_sent to false (Line 12). As its name suggests, this variable tells us whether we’ve sent a request for work to another process; if we have, we know that we should wait for work or a message saying “no work available” from that process before sending out a request to another process.

The while(1) loop is the distributed-memory version of the OpenMP busy-wait loop. We are essentially waiting until we either receive work from another process or we receive word that the search has been completed.

When we enter the while(1) loop, we deal with any outstanding messages in Line 14. We may have received updates to the best tour cost and we may have received requests for work. It’s essential that we tell processes that have requested work that we have none, so that they don’t wait forever when there’s no work avail-able. It’s also a good idea to deal with updates to the best tour cost, since this will free up space in the sending process’ message buffer.

After clearing out outstanding messages, we iterate through the possibilities:

The search has been completed, in which case we quit (Lines 15–16).

We don’t have an outstanding request for work, so we choose a process and send it a request (Lines 17–19). We’ll take a closer look at the problem of which process should be sent a request shortly.

Let’s take a closer look at some of these functions.

The function My_avail_tour count can simply return the size of the process’ stack. It can also make use of a “cutoff length.” When a partial tour has already visited most of the cities, there will be very little work associated with the subtree rooted at the partial tour. Since sending a partial tour is likely to be a relatively expensive operation, it may make sense to only send partial tours with fewer than some cutoff number of edges. In Exercise 6.24 we take a look at how such a cutoff affects the overall run-time of the program.

A Split_stack function is called by Fulfill_request. It uses the same basic algo-rithm as the Pthreads and OpenMP functions, that is, alternate partial tours with fewer than split_cutoff cities are collected for sending to the process that has requested work. However, in the shared-memory programs, we simply copy the tours (which are pointers) from the original stack to a new stack. Unfortunately, because of the pointers involved in the new stack, such a data structure cannot be simply sent to another process (see Exercise 6.25). Thus, the MPI version of Split_stack packs the contents of the new stack into contiguous memory and sends the block of contiguous memory, which is unpacked by the receiver into a new stack.

As an example, suppose that a program contains the following definitions:

Then we can send a variable with type tour t using the following code:

Similarly, we can receive a variable of type tour t using the following code:

The Send_rejects function (Line 5) is similar to the function that looks for new best tours. It uses MPI_Iprobe to search for messages that have requested work. Such messages can be identified by a special tag value, for example, WORK REQ TAG. When such a message is found, it’s received, and a reply is sent indicating that there is no work available. Note that both the request for work and the reply indicating there is no work can be messages with zero elements, since the tag alone informs the receiver of the message’s purpose. Even though such messages have no content outside of the envelope, the envelope does take space and they need to be received.

The functions Out_of_work and No_work_left (Lines 11 and 15) implement the ter-mination detection algorithm. As we noted earlier, an algorithm that’s modeled on the termination detection algorithm we used in the shared-memory programs will have problems. To see this, suppose each process stores a variable oow, which stores the number of processes that are out of work. The variable is set to 0 when the program starts. Each time a process runs out of work, it sends a message to all the other pro-cesses saying it’s out of work so that all the processes will increment their copies of oow. Similarly, when a process receives work from another process, it sends a message to every process informing them of this, and each process will decrement its copy of oow. Now suppose we have three process, and process 2 has work but processes 0 and 1 have run out of work. Consider the sequence of events shown in Table 6.10. 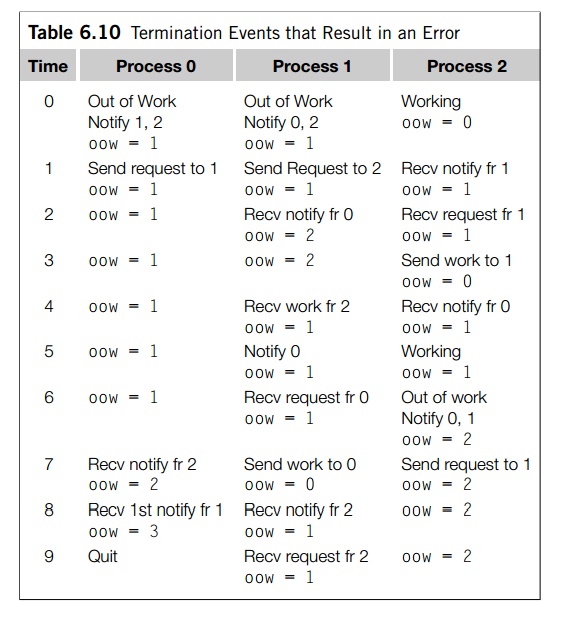 but it’s not improbable that process 1 was, for example, interrupted by the operating system and its message wasn’t transmitted until after the message from process 2 was transmitted.

Distributed termination detection is a challenging problem, and much work has gone into developing algorithms that are guaranteed to correctly detect it. Concep-tually, the simplest of these algorithms relies on keeping track of a quantity that is conserved and can be measured precisely. Let’s call it energy, since, of course, energy is conserved. At the start of the program, each process has 1 unit of energy. When a process runs out of work, it sends its energy to process 0. When a process fulfills a request for work, it divides its energy in half, keeping half for itself, and sending half to the process that’s receiving the work. Since energy is conserved and since the program started with comm_sz units, the program should terminate when process 0 finds that it has received a total of comm_sz units.

The Out of work function when executed by a process other than 0 sends its energy to process 0. Process 0 can just add its energy to a received_energy variable. The No_work_left function also depends on whether process 0 or some other process is calling. If process 0 is calling, it can receive any outstanding messages sent by

Out_of_work and add the energy into received energy. If received energy equals comm sz, process 0 can send a termination message (with a special tag) to every process. On the other hand, a process other than 0 can just check to see if there’s a message with the termination tag.

The tricky part here is making sure that no energy is inadvertently lost; if we try to use floats or doubles, we’ll almost certainly run into trouble since at some point dividing by two will result in underflow. Since the amount of energy in exact arithmetic can be represented by a common fraction, we can represent the amount of energy on each process exactly by a pair of fixed-point numbers. The denominator will always be a power of two, so we can represent it by its base-two logarithm. For a large problem it is possible that the numerator could overflow. However, if this becomes a problem, there are libraries that provide arbitrary precision rational numbers (e.g, GMP [21]). An alternate solution is explored in Exercise 6.26.

Once we’ve decided on which process we plan to send a request to, we can just send a zero-length message with a “request for work” tag. However, there are many possibilities for choosing a destination:

1. Loop through the processes in round-robin fashion. Start with (my rank + 1) % comm sz and increment this destination (modulo comm_sz) each time a new request is made. A potential problem here is that two processes can get “in synch” and request work from the same destination repeatedly.

These are three possible options. We’ll explore these options in Exercise 6.29. Also see [22] for an analysis of the options.

Checking for and receiving work

Performance of the MPI programs

The nodes of this system are small shared-memory systems, so communication through shared variables should be much faster than distributed-memory commu-nication, and it’s not surprising that in every instance the Pthreads implementation outperforms the MPI implementation.

The cost of stack splitting in the MPI implementation is quite high; in addition to the cost of the communication, the packing and unpacking is very time-consuming. It’s also therefore not surprising that for relatively small problems with few processes, the static MPI parallelization outperforms the dynamic parallelization. However, the

8- and 16-process results suggest that if a problem is large enough to warrant the use of many processes, the dynamic MPI program is much more scalable, and it can provide far superior performance. This is borne out by examination of a 17-city problem run with 16 processes: the dynamic MPI implementation has a run-time of 296 seconds, while the static implementation has a run-time of 601 seconds.

Note that times such as 0.1 second for the second problem running with 16 pro-cesses don’t really show superlinear speedup. Rather, the initial distribution of work has allowed one of the processes to find the best tour much faster than the initial distri-butions with fewer processes, and the dynamic partitioning has allowed the processes to do a much better job of load balancing.