The “obvious” implementation of the reduced algorithm is likely to be extremely complicated. Before computing the forces, each process will need to gather a subset of the positions, and after the computation of the forces, each process will need to scatter some of the individual forces it has computed and add the forces it receives. Figure 6.6 shows the communications that would take place if we had three processes, six particles, and used a block partitioning of the particles among the processes. Not suprisingly, the communications are even more complex when we use a cyclic distribution (see Exercise 6.13). Certainly it would be possible to implement these communications. However, unless the implementation were very carefully done, it would probably be very slow.

Fortunately, there’s a much simpler alternative that uses a communication struc-ture that is sometimes called a ring pass. In a ring pass, we imagine the processes 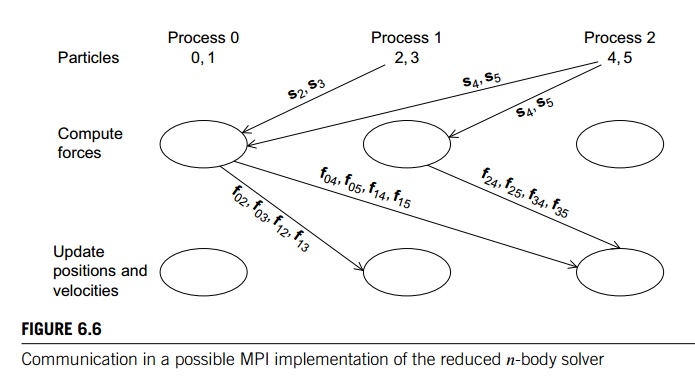 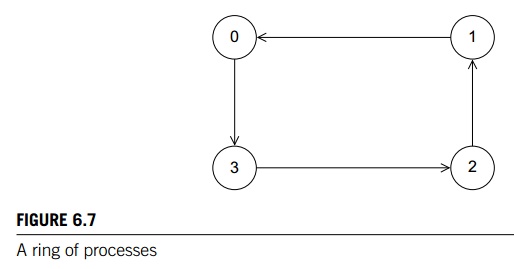 Of course, the virtue of the reduced algorithm is that we don’t need to compute all of the inter-particle forces since fkq = -  fqk, for every pair of particles q and k. To see

The key to understanding the ring pass computation of the forces is to observe that the interparticle forces that are subtracted are computed by another task/particle, while the forces that are added are computed by the owning task/particle. Thus, the computations of the interparticle forces on particle 3 are assigned as follows:

So, suppose that for our ring pass, instead of simply passing loc_n = n/comm_sz  positions, we also pass loc_n forces. Then in each phase, a process can

1. compute interparticle forces resulting from interaction between its assigned particles and the particles whose positions it has received, and

See, for example, [15, 34] for further details and alternatives. 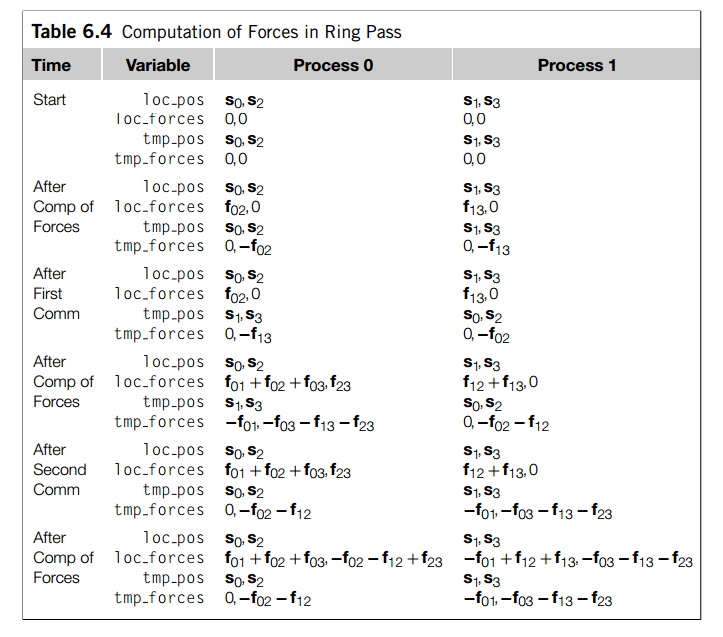 Now, the two processes exchange tmp pos and tmp forces and compute the forces due to interaction among their local particles and the received particles. In the reduced algorithm, the lower ranked task/particle carries out the computation. Process 0 computes f01, f03, and f23, while process 1 computes f12. As before, the newly computed forces are added into the appropriate locations in loc_forces and subtracted from the appropriate locations in tmp_forces.

To complete the algorithm, we need to exchange the tmp arrays one final time.1 Once each process has received the updated tmp forces, it can carry out a simple vector sum 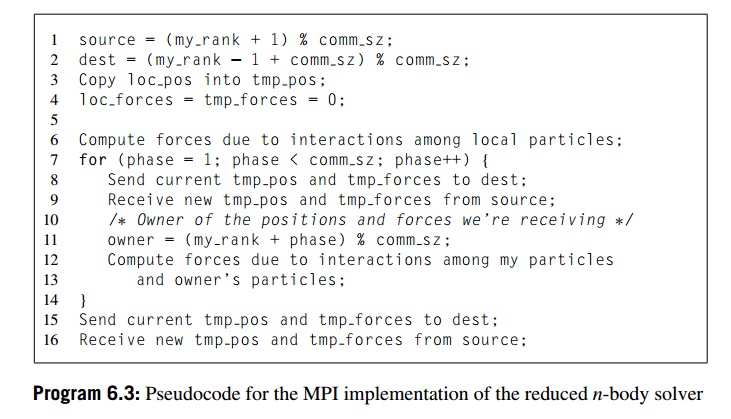 Thus, we can implement the computation of the forces in the reduced algorithm using a ring pass with the pseudocode shown in Program 6.3. Recall that using MPI_Send and MPI_Recv for the send-receive pairs in Lines 8 and 9 and 15 and 16 is unsafe in MPI parlance, since they can hang if the system doesn’t provide sufficient buffering. In this setting, recall that MPI provides MPI_Sendrecv and MPI_Sendrecv_replace. Since we’re using the same memory for both the outgoing and the incoming data, we can use MPI_Sendrecv_replace.

The principal difficulty in implementing the actual computation of the forces in Lines 12 and 13 lies in determining whether the current process should compute the force resulting from the interaction of a particle q assigned to it and a particle r whose position it has received. If we recall the reduced algorithm (Program 6.1), we see that task/particle q is responsible for computing fqr if and only if q < r. However, the arrays loc_pos and tmp_pos (or a larger array containing tmp_pos and tmp_forces) use local subscripts, not global subscripts. That is, when we access an element of (say) loc pos, the subscript we use will lie in the range 0, 1, …, loc_n-1, not 0, 1, … , n-1; so, if we try to implement the force interaction with the following pseudocode, we’ll run into (at least) a couple of problems:

The first, and most obvious, is that masses is a global array and we’re using local subscripts to access its elements. The second is that the relative sizes of loc_part1 and loc_part2 don’t tell us whether we should compute the force due to their inter-action. We need to use global subscripts to determine this. For example, if we have four particles and two processes, and the preceding code is being run by process 0, then when loc_part1 = 0, the inner loop will skip loc_part2 = 0 and start with loc_part2 = 1; however, if we’re using a cyclic distribution, loc_part1 = 0 corre-sponds to global particle 0 and loc_part2 = 0 corresponds to global particle 1, and we should compute the force resulting from interaction between these two particles.

The function Global_to_local should convert a global particle index into a local par-ticle index, and the function Compute_force should compute the force resulting from the interaction of two particles. We already know how to implement Compute_force. See Exercises 6.15 and 6.16 for the other two functions.