Psychodynamic approaches to therapy have their origins in the psychoanalytic methodthat Sigmund Freud developed at the beginning of the twentieth century.

Psychodynamic approaches to therapy have their origins in the psychoanalytic methodthat Sigmund Freud developed at the beginning of the twentieth century. Freud’s basic assumption was that a patient’s ills (in Freud’s terms, her neuroses) stemmed from unconscious conflicts that developed early in childhood . By adulthood, the patient had developed a range of defenses to deal with these conflicts, but these defenses also shielded her from seeing clearly both the outer world and her own inner world. This led to a range of problems that manifested as psychological symptoms.

Freud believed that for a patient to overcome her neuroses, she must gain insight into her own buried thoughts and wishes. Importantly, though, this insight cannot be just an intellectual matter. Freud argued that the person must “work through” the conflict, in order to gain control over her passions and not just intellectualize them. If this working through is successful, the person will integrate her thoughts and memo-ries in a coherent way, and will at last overcome the maladaptive patterns that grew out of the unresolved conflicts.

What does it mean to “work through” a conflict? For Freud, the process involved many elements, but one crucial aspect is transference, the patient’s tendency to respond to the analyst in ways that re-create her responses to the major figures in her own life. Thus, the patient ends up loving or hating the analyst just as she loved or hated her mother, father, siblings, and, more recently, her lovers or friends. All of these feelings are “transferred” to the analyst, as a kind of repetition of the unresolved prob-lems of the patient’s childhood.

Freud argued that the transference-charged relationship with the analyst could be a powerful therapeutic tool. It lets the analyst hold up a mirror to the patient to show her how she really feels and acts toward the important people in her life. For example, take a person who expresses violent anger toward his psychoanalyst and then is immediately anxious. How would his analyst interpret this? Perhaps the patient is reacting to the analyst much as he would respond to his tyrannical father, and having acted with dis-respect, is now expecting some horrible retribution. Needless to say, the analyst will not act like Daddy, but instead might say something mildly reassuring, such as “That was hard to get out, wasn’t it?” The analyst might then point out how the patient’s trau-matic memories of Daddy (and, more generally, the pattern of the patient’s past rela-tionships) are distorting his current relationships.

Through many such experiences, the patient’s symptoms lessen. By maintaining her neutrality, the analyst allows herself temporarily to stand in for the significant charac-ters in the patient’s early family drama but does not let herself be drawn into the play.

She lets the patient say the same old lines and go through the same old motions, but she does not respond to them as the cast of charac-ters from the patient’s childhood did. Her job is to let the patient see what she is really doing and to help the patient see that old patterns need not be repeated. The result of all this emotional reeducation is the creation of a new life script with better lines and more acceptable outcomes.

Many present-day psychotherapists use techniques that bear Freud’s imprint, but they have modified the treatment in various ways. Most have stepped away from the intensity of Freud’s regimen (he insisted on at least three sessions per week) and abandoned the familiar icon of Freud’s practice—the analyst’s couch (which, in Freud’s office, allowed the patient to relax while Freud sat in a posi-tion out of the patient’s sight; Figure 17.3). These more modern prac-titioners endorse many of Freud’s claims, they tend to emphasize current interpersonal and cultural factors rather than the psychological traumas of early childhood. If they discuss early development with their patients, it is strictly to identify how the patterns of interaction established in childhood influence current choices. In these more modern therapies, conscious thoughts receive as much scrutiny as unconscious conflicts, and therapist and patient work together to help the patient develop a coherent and complete sense of self, and to find ways of relating to oth-ers that are undistorted by past conflicts or maladaptive defense mechanisms. 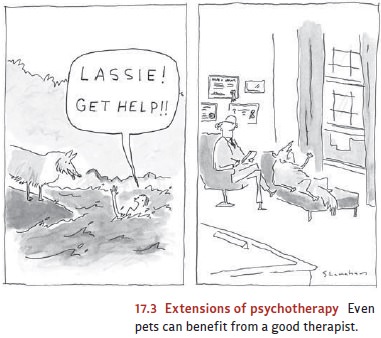 We discussed the fact that many of the neo-Freudian traditions emphasize an individual’s social relationships. These more modern approaches have led to several forms of therapy, including interpersonal therapy (IPT), a brief (12- to 16-session) treatment that builds on the claim that mental disorders are often created by a social isolation that cuts a person off from the emotional sustenance provided by healthy relationships (Klerman & Weissman, 1993; Weissman & Markowitz, 1994).

IPT is often used as a treatment for depression, and so a course of IPT might start with an assessment of what factors changed in the person’s life at the time the depres-sion began. For example, one class of factors involves interpersonal role transitions, such as graduation from college, beginning a love affair, or getting married. The thera-pist can help a person having trouble with these transitions learn to act the new part and fill the expectations of the other people involved in the new social setting. (Thus, for example, a recently married man must learn what it means to be a husband.) The therapist will also help the patient understand the advantages and disadvantages of both the old and the new roles. In these ways, the therapy helps the patient gain an understanding of how he interacts with others and then helps him learn new and more beneficial ways of interacting and communicating.