The psychological treatments described so far are widely used and, as we will discuss later, are often quite effective.

The psychological treatments described so far are widely used and, as we will discuss later, are often quite effective. However, as we mentioned, there is a second major class of treatments—the biomedical treatments—which are designed to alter the brain’s functioning more directly.

Biomedical treatments for mental illness have a long history. As mentioned earlier, the first known biomedical treatment is a prehistoric surgical procedure called trephi-nation, in which pieces of the skull were removed to provide an escape path for the spir-its or demons thought to be causing the affliction (Figure 17.13). Other early procedures involved bloodlettings or purgatives, both intended somehow to restore mental equilib-rium. Later developments were hardly milder. For example, Benjamin Rush (1745–1813), one of the signers of the Declaration of Independence and the acknowl-edged father of American psychiatry, submerged patients in hot or cold water until they were just short of drowning or twirled them on special devices at speeds that rendered 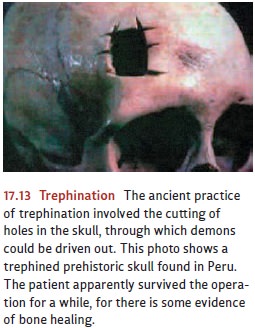 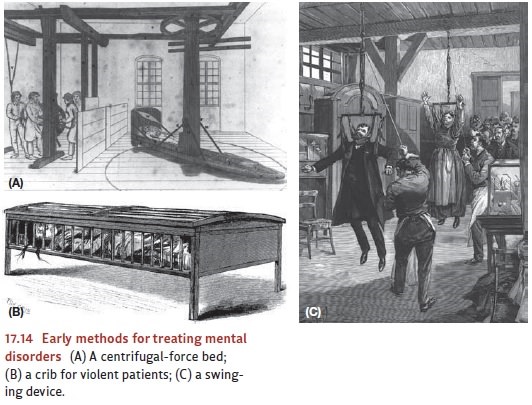 them unconscious (Figure 17.14). Such methods were said to reestablish balance between bodily and mental functions. They almost certainly had no such positive effects, although hospital attendants probably welcomed them, since they undoubtedly terrified the inmates and so helped to “keep order” (Mora, 1975).

More recent biomedical treatments have been more humane, have had more secure empirical foundations, and have certainly been more effective than these early treat-ments. Some of these are pharmacological and consist of medications that alter infor-mation flow at the synapse, thereby influencing thoughts, feelings, and behaviors. Others are nonpharmacological and involve the direct manipulation of the nervous system via surgery or electrical or magnetic pulses.