One approach to group therapy is to gather people who have the same problem.

So far, we have considered various approaches to one-on-one therapy—that is, one therapist working with one patient. Over the past few decades, therapists have also been exploring various modes of group therapy that feature all conceivable permuta-tions: one therapist and several patients, several therapists and several patients, several patients and no therapist, and so on. Treating patients in groups has an obvious advan-tage: more patients can be accommodated by a limited number of therapists. But group treatment is appealing for other reasons as well, including the fact that it allows thera-pists to observe and work with problems that emerge more readily in group settings.

One approach to group therapy is to gather people who have the same problem. They may all be alcoholics, or abuse victims, or ex-convicts. The members meet, share relevant advice and information, help newcomers along, and exhort and support one another in their resolve to overcome their difficul-ties (Figure 17.11). The classic example is Alcoholics Anonymous (AA), which gives the recovering alcoholic the knowledge that she is not alone, helps her weather crises without suffering a relapse, and assists her in get-ting back on her feet if relapses do occur. Another is Toastmasters, a social club for people with public-speaking phobias. In these “we are all in the same boat” groups, the primary aim is to manage the problem that all the members share. Relatively little attention is paid to any one individual’s unique emotional problems. 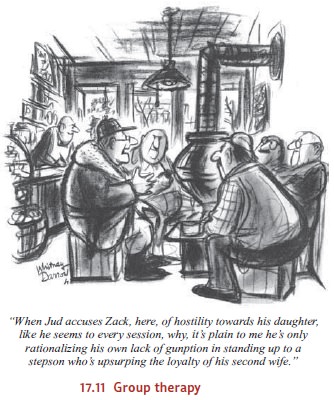 The rules of the game are very different in groups explicitly organized for group therapy. Here, a number of selected patients, usually around 8 to 10, are

treated together under the guidance of a trained therapist. Within this format, the tech-niques used by the therapist vary considerably. In some groups, the therapist encour-ages psychodynamically oriented insights; in others, the therapist may use behavioral or cognitive procedures. No matter the technique, the treatment of each group member really begins as he realizes that he is not all that different from the others. He learns that there are other people who are painfully afraid of rejection, are desperately lonely, have hostile fantasies about their parents, and so on. Additional benefits come from a sense of group belongingness, support, and encouragement. Most importantly, the group provides a ready-made laboratory in interpersonal relations. The patient can discover just what he does that rubs others the wrong way, how he can relate to certain kinds of people more effectively, and the like.

In the therapy groups we have considered so far, the members are almost always strangers before the sessions begin. This contrasts markedly with couple and family therapy. Here, the people seeking help know one another very well (sometimes all too well) before they enter therapy.

Couple therapy (including marriage counseling) and family therapy have become major therapeutic movements (Figure 17.12; Kerr & Bowen, 1988; Minuchin, 1974; Satir, 1967; Snyder, Castellani, & Whisman, 2006). It is probably no coincidence that this growth has occurred during a time of turmoil in American families, evidenced by spiral-ing divorce rates and reports of child and spousal abuse and by the increasing number of single-parent households. 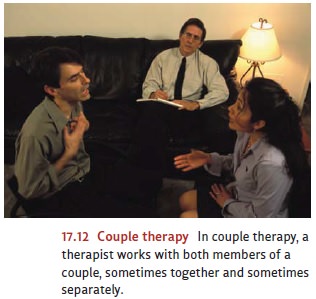 Family and couple therapists generally regard the family as an emotional system, with the feelings and functioning of each individual heavily influenced by interactions within the system. Thus, one person in the family may be depressed, or one member of a couple may be aggressive, but the difficulty does not lie in that person alone. Instead, she is merely the “identified patient” within the system, and her symptoms may reflect some broader problem within the family or the couple (Dadds, 1995). Likewise, when one person in the couple or family has a problem, its effects can ricochet through the family and affect all its members.

For example, let’s imagine that one family member suffers from bipolar disorder. This will lead to behaviors that may be destructive to the whole family—disrupting their routines, causing them to worry, draining their finances. This may lead to hostility, or perhaps overprotection, toward the patient with the initial disorder, and this, in turn, can cause further problems for the patient, aggravating the disorder and producing new difficulties. As a result, the treatment may have to include medication for the bipolar disorder and steps to repair the dynamic within the family. In fact, there is now good evidence that patients with bipolar disorder are less likely to relapse if their treatment plan includes family-level interventions as well as medication (Miklowitz, 2007).