It seems, then, that our efforts to evaluate therapies will need to draw on diverse lines of evidence from many different studies.

It seems, then, that our efforts to evaluate therapies will need to draw on diverse lines of evidence from many different studies. This creates a new question for us: How should we put together the evidence? What is the best way to integrate and summarize the available data? For many investigators, the answer lies in a statistical technique called meta-analysis.

In one of the earliest analyses of this kind, 475 studies comprising 25,000 patients were reviewed (M. L. Smith et al., 1980; Figure 17.26). In each of these studies, patients who received some kind of psychotherapy were compared with a similar group of 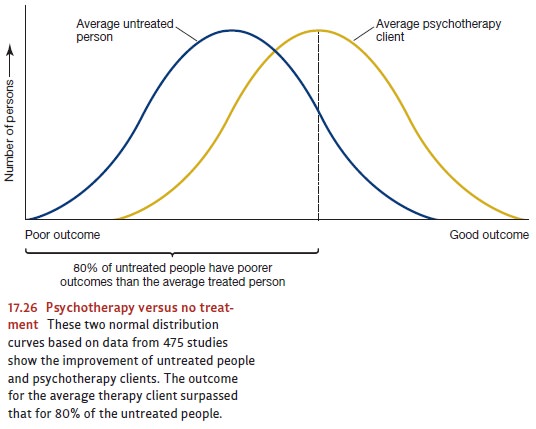 patients who did not receive any. The studies included in this analysis differed in many respects. One was the kind of psychotherapy used—whether psychodynamic, human-istic, behavioral, or cognitive. Another factor that varied was the criterion of improve-ment. In some cases, it was the level of a symptom: the amount of avoidance that a person with snake phobias eventually showed toward snakes, the number of washing episodes shown by a patient who washed compulsively, and so on. In others, it was based on an improvement in functioning, such as a rise in the grade-point average (GPA) of a student who was disturbed. In still others, such as studies of patients with depression, it was an improvement in mood as rated by scales completed by the patient himself or by knowledgeable outsiders, such as his spouse and children.

Given all these differences among the studies, combining the results seems problem-atic, but meta-analysis provides a method. Consider two hypothetical studies, A and B. Let us say that Study A shows that, after treatment, the average patient with snake pho-bia can move closer to a snake than the average patient who received no treatment. Let us also assume that Study B found that students with depression who received psychotherapy show a greater increase in GPA than do equivalent students in an untreated control group. On the face of it, there is no way to average the results of the two studies because they use completely different units. In the first case, the average effect of therapy—that is, the difference between the group that received treatment and the one that did not—is measured in feet (how near the snake the patient will go); in the second, it is counted in GPA points. But here is the trick provided by meta-analysis. Let us suppose we find that in Study A, 85% of the treated patients are able to move closer to the snake than the average untreated patient. Let us further suppose that in Study B, 75% of the students who received psychotherapy earn a GPA higher than the average GPA of the untreated students. Now we can average the scores. To be sure, dis-tance and GPA points are like apples and oranges and cannot be compared. But the percentage relationships—in our case, 85 and 75—are comparable. Since this is so, they can be averaged across different studies.

What, therefore, do we learn from meta-analyses? The conclusion drawn by averag-ing across the 475 studies was that the “average person who receives therapy is better off at the end of it than 80% of the persons who do not”. Later meta-analyses have used different criteria in selecting studies for inclusion but yield similar results (see, for example, Wampold et al., 1997). Other studies found that even months or years after treatment, patients still show these improvements (Nicholson & Berman, 1983).