As we saw, mental disorders typically involve many factors, some biolog-ical and some rooted in a person’s circumstances.

As we saw, mental disorders typically involve many factors, some biolog-ical and some rooted in a person’s circumstances. Different treatments target different aspects of this network of interrelated causes. Psychological treatments aim to alter psychological and environmental processes via “talk therapy.” Biomedical treatments seek to alter underlying biological processes directly, often through medication or neurosurgery.

That said, it is still useful to distinguish between treatments that emphasize psycho-logical approaches and those that emphasize biological approaches, and this leads us to ask: How does a practitioner decide which emphasis is best in a given case? The answer depends on the illness and our understanding of its causes. If the illness seems shaped primarily by environmental causes (such as a hostile family environment) or by the person’s perceptions and beliefs, then a psychological intervention may be best— helping the person to find ways to cope with (or change) the environment, or persuad-ing the person to adopt new beliefs. If the illness seems shaped primarily by some biological dysfunction (perhaps an overreactive stress response, for example, or a short-age of some neurotransmitter), then a biomedical intervention may be preferable.

However, these points are at best rough rules of thumb. In many cases, there may be no direct correspondence between what triggers a disorder (a specific biological dysfunction or some life problem) and the nature of the treatment. Some problems arising from a difficult situation are best treated medically; some problems arising from a biological dysfunction are best treated with psychotherapy. In choosing a form of therapy, practitioners must focus on what works, rather than focusing exclusively on how the disorder arose.

We will have a great deal to say about these two broad emphases in treatment—the psychological and the biological—and the specific ways that treatment unfolds. Before we turn to these details, let’s consider the providers and recipients of these treatments. 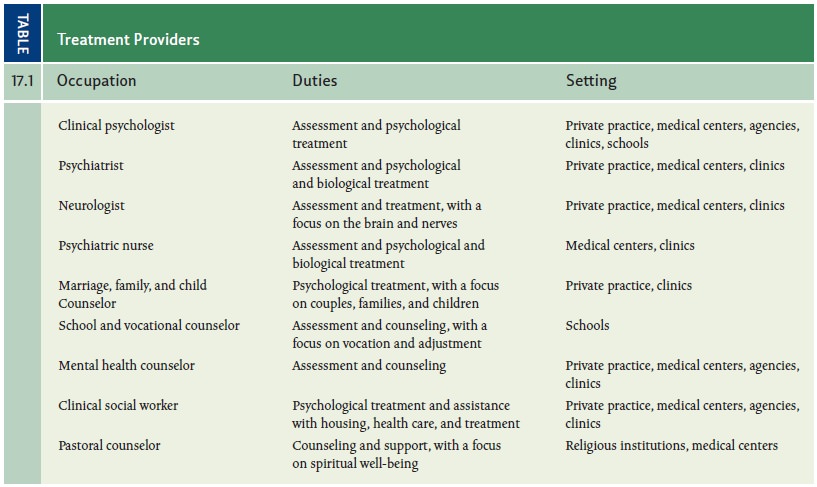 Surprisingly, more experienced providers are not always more effective than less experienced providers (McFall, 2006), and even professional credentials are not neces-sarily a good predictor of therapeutic success (Blatt, Sanislow, Zuroff, & Pilkonis, 1996). These findings suggest that who the therapist is, what he or she does, and how well this matches the patient’s needs may be far more important than the therapist’s level of experience or the degrees he has earned. Also crucial is the quality of the rapport the therapist establishes with the patient—whether the patient respects and trusts the therapist and feels comfortable in the therapeutic setting. This rapport, too, is often more important than the therapist’s credentials or type and degree of training.

Psychological treatments can be administered either with or without a license (with the license usually given by the state in which the therapist is practicing). In clear con-trast, the administration of biomedical treatments does require a license. Here too, however, there are many different providers, including psychiatrists, neurologists, and psychiatric nurses. In fact, this list has been growing, with some jurisdictions now per-mitting “prescription privileges” for clinical psychologists—that is, allowing people with Ph.D.s to write prescriptions, a privilege that used to be reserved for people with medical degrees.

People seek treatment for a wide variety of reasons. Some seek relief from the pain and dysfunction associated with a diagnosable mental disorder. Others suffer with subsyn-dromal disorders—versions of mental disorders that don’t meet the criteria for diag-nosis but that may nonetheless cause significant problems (Ratey & Johnson, 1997). Others have neither a full-fledged nor a sybsyndromal disorder but instead seek help with feelings of loss, grief, or anxiety, with relationship difficulties, or with confusion about a major life decision. Still others seek therapy in order to live happier and more fulfilled lives.

There is yet another (and very large) group of people who might benefit from therapy but cannot get it. According to the World Health Organization, roughly 450 million people worldwide suffer from various mental disorders, and the clear majority live in developing countries—90% of these people have no access to treat-ment (Miller, 2006b). Access is also an issue in developed countries. Many forms of mental illness are more common among the poor, but the poor are less likely to have insurance coverage that will make the treatment possible (Wang, Lane, et al., 2005).

Some of the problems just described could—in theory—easily be solved. We could train more therapists and open more clinics so that treatment would be available to more people. We could improve insurance coverage or arrange for alternative forms of financing. These steps, however, would not be sufficient, because there is still another factor that limits the number of people who can benefit from therapy: the limited availability of culturally appropriate therapy and culturally competent therapists.

A therapist shows cultural competence by understanding how a patient’s beliefs, values, and expectations for therapy are shaped by his cultural background (Sue, 1998). A therapist with this understanding can modify the goals of therapy to conform to the patient’s values (Hwang, 2006). For example, many Asian cultures emphasize formal-ity in all their affairs. Social roles within these cultures are often clearly defined and tend to be structured largely by age and sex, such that a father’s authority is rarely chal-lenged within the family. Growing up in such a culture may play an important part in shaping the values a patient brings to therapy. A therapist insensitive to these values risks offending the patient and endangering the therapy. Similarly, a therapy that emphasizes individual autonomy over family loyalties might inadvertently violate the patient’s cultural traditions and so be counterproductive.

Cultural sensitivity also includes other issues. For example, therapists who expect their patients to take responsibility for making changes in their lives may be ineffective with patients whose cultural worldview stipulates that important events are caused by factors such as fate, chance, or powerful others. Likewise, practitioners who consider psychotherapy a secular endeavor would do well to remember that in many cultures, any kind of healing must acknowledge the patient’s spirituality.

Attention to such cultural differences may also be valuable for another reason: it’s possible that the Western world can learn something about the treatment of mental disorders from the cultures in developing countries. For example, the long-term prog-nosis for schizophrenia is considerably better in developing countries than it is in the United States (Thara, 2004). Patients with schizophrenia in India, as one illustration, show far more remission of symptoms and fewer relapses than patients with schizo-phrenia in the United States and often recover enough to hold a full-time job, marry, and otherwise lead reasonably normal lives.

Why is this? Some suggest that physicians in the United States rely too much on medication in treating schizophrenia and too little on interventions that emphasize job training and a supportive social network. The opposite is the case in India, where med-ication is often not available and institutionalization is usually not an option. Indeed, it is estimated that roughly 99% of individuals with schizophrenia live with their fam-ilies in India, compared with 15 to 25% in the United States (Thara, 2004). Of course, the style of treatment in the United States is encouraged by many factors, including families that may want to distance themselves from the patient and insurance compa-nies that will reimburse patients for psychotropic drugs but hesitate to pay for social programs.

It seems, then, that cultural competence needs to be broadly understood. It includes the need for Western-style practitioners to be alert to the cultural background (and so to the assumptions, beliefs, and values) of their patients. But it also includes an open-ness to the possibility that the style of treating mental illness in other cultures may, for some disorders, be preferable to the methods used in the developed countries. We need to keep these points in mind as we turn to a consideration of what the various forms of treatment involve.