Nonpharmacological treatments for mental illness include psychosurgery and electro-convulsive therapy as well as a number of promising newer treatments.

Nonpharmacological treatments for mental illness include psychosurgery and electro-convulsive therapy as well as a number of promising newer treatments. These treat-ments conjure up disturbing images for many people, in part because of the portrayals of these techniques in the popular media (see Figure 17.19). However, as we will see below, there is a place for each of these treatments in contemporary practice. 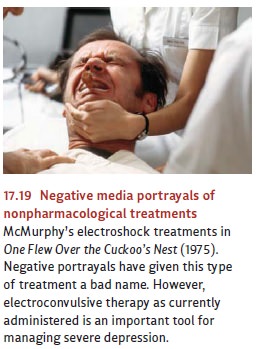 Psychosurgery, or brain surgery, aims to alter thinking or behavior by removing brainareas or disconnecting them from each other. In a prefrontal lobotomy, for example, the surgeon severs the neurological connections between the thalamus and the frontal lobes, in whole or in part. This operation was originally meant to liberate a patient’s thoughts from the pathological influence of her emotions, on the ill-informed assumption that thought and emotion were localized in the frontal lobes and the thalamus, respectively. In the 1940s and 1950s, tens of thousands of patients were subjected to lobotomies, and early reports on the procedure were quite enthusiastic. It soon became clear, however, that the surgery had powerful side effects, including a disruption of many higher cognitive functions such as memory and the ability to plan and self-regulate, and so the procedure is now rarely used (Tierney, 2000; Valenstein, 1986).

Recently, psychosurgery has reemerged as a useful technique, but it has been refined considerably, both in the procedures used and in the patients judged suitable for them (Hurley, Black, Stip, & Taber, 2000). Neurosurgeons still manipulate the nervous system directly, but they do so by creating very precise lesions in specific brain areas instead of disconnecting or destroying whole lobes or regions (see Figure 17.20). In these cases, the surgery is reserved for patients who are severelydisabled and show no improvement after all other treatment alternatives have been exhausted. This surgery-as-last-resort has been used in patients with intractable depression and epilepsy, severe obsessive-compulsive disorder, and chronic physical pain, and it is often beneficial. Clearly, it poses risks, but for some patients they may be acceptable compared with the severity of the ongoing disability (Baer et al., 1995; Bridges, 1987; Davies & Weeks, 1993; Hay et al., 1993; Jenike, 2001; Mahli & Bartlett, 2000). 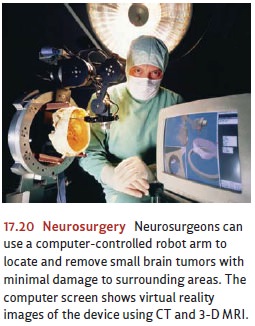 Another form of biomedical therapy is electroconvulsive therapy (ECT), sometimes called shock treatment. When ECT first came into use, in the 1930s, 100 volts of electricity were administered to fully awake patients, some of whom had such violent convulsions that they suffered serious bruises or bone fractures. By contrast, modern ECT looks relatively tame (Figure 17.21). In modern ECT, a current of moderate inten-sity is passed for about half a second between two electrodes attached to the patient’s head. The result is a 30- to 60-second convulsive seizure similar to that seen in epilepsy, with the usual course of ECT consisting of six to ten treatments over a period of 1 or 2 weeks. Patients are given short-acting anesthetics to render them temporarily unconscious and muscle relaxants to reduce the manifestations of the seizure to a few slight twitches (Andreasen & Black, 1996). 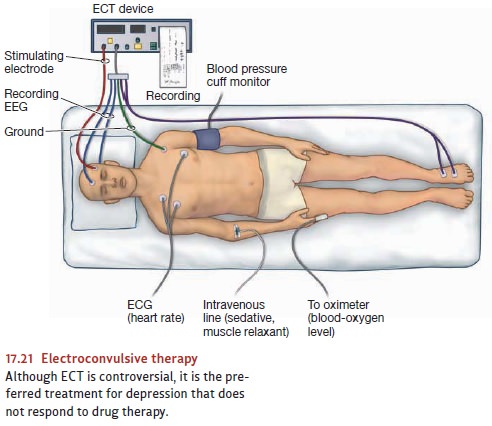 ECT was originally intended to treat schizophrenia but was soon established as par-ticularly effective for depression. It works for as many as 70 to 90% of patients who have not responded to any antidepressant medication (Andreasen & Black, 1996; Janicak et al., 1985; Petrides et al., 2001) or who cannot take such medications because of overdose potential or other medical problems. In addition, ECT acts more quickly than antidepressant medications (Fink, 2008). ECT also seems quite effective in treat-ing acute mania as well as various psychotic states associated with drug intoxication (Gitlin, 2001; Sackeim, Devanand, & Nobler, 1995). It is not clear what the mechanisms of action are, but ECT is clearly more than a high-tech placebo: The real ECT treatment consistently outperforms sham ECT (Carney & Geddes, 2003).

Despite these advantages, ECT remains controversial, partly because in many cases it produces memory impairment (Rami-Gonzalez et al., 2001). These cognitive side effects are diminished if the ECT is delivered to just one side of the brain during ther-apy, as is now commonly done (Sackeim et al., 2000). In any case, ECT is generally used only after medication has failed or when there seems to be a serious chance of suicide. In such contexts, there is now a clear consensus that modern ECT represents one of the most effective treatments for depression (Glass, 2001).

A number of emerging biomedical treatments have also attracted attention. Here we’ll highlight three treatments that are in varying stages of development and testing. The first—vagal nerve stimulation—involves implanting a battery-powered stimulator in the chest just underneath the skin. This stimulator delivers carefully cali-brated electrical pulses to the vagus nerve. Although this treatment has FDA approval for use with treatment-resistant depression, information about its short- and long-term efficacy is still being gathered.

A second promising treatment is deep brain stimulation (DBS). This treatment is based on the finding that severe forms of psychopathology are often associated with abnormalities in the activation levels of certain brain systems. For example, depression is associated with heightened brain activation in a limbic system region known as the subgenual cingulate cortex. On the basis of these findings, Mayberg and her colleagues implanted electrodes in these brain areas in patients whose severe depression had not responded to conventional interventions.

They then used DBS to disrupt abnormal patterns of activity, thereby normalizing the activity of this portion of the brain (Mayberg et al., 2005; Figure 17.22). In initial find-ings, four of six patients showed clear benefits from this treatment, a finding that has provoked considerable interest and spurred research efforts to better understand the brain bases of depression (Lozano et al., 2008; Ressler & Mayberg, 2007; for more on DBS, see Miller, 2009). This treatment is currently being evaluated by other groups, both for depression and for other disorders, such as medication-resistant obsessive-compulsive disorder (Abelson et al., 2005; Mallet et al., 2008). 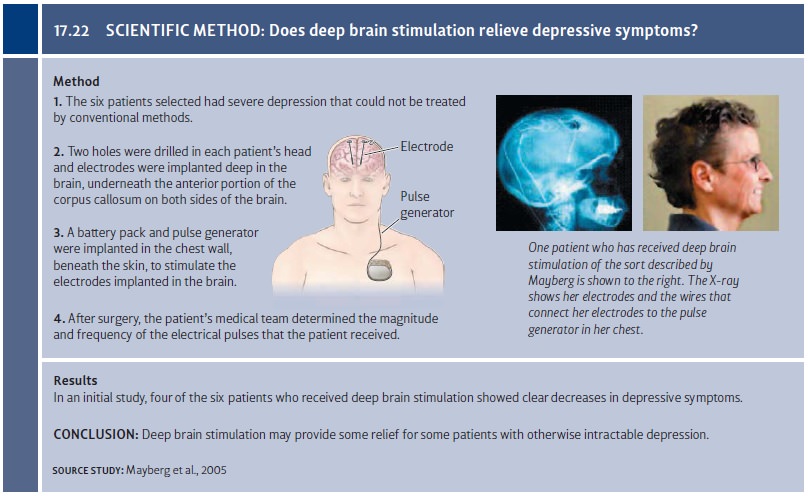 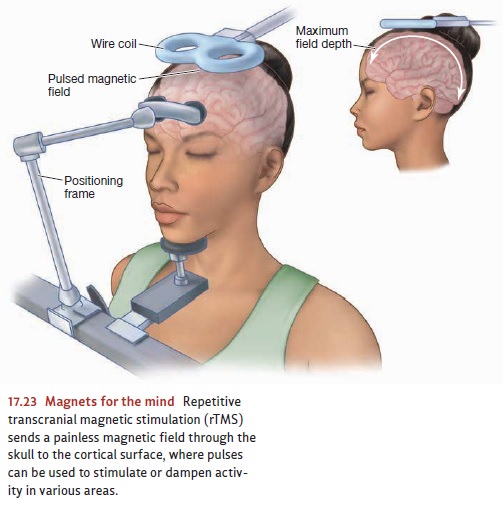 A third type of treatment is called repetitive transcranial magnetic stimulation(rTMS). In this treatment, rapid pulses of magnetic stimulation from a hand-heldcoil placed close to the scalp are used to alter neuronal activity in fully awake participants (Figure 17.23). Treatments last 20 to 30 minutes for several weeks, and the procedure is painless and not associated with any cognitive side effects. When used to treat medication-resistant depression, rTMS has been shown to be as effec-tive as ECT (Janicak et al., 2002). These are exciting findings because, unlike ECT, rTMS does not require anesthetic and doesn’t appear to have cognitive side effects (Janicak, 2005).