We have now described the major modes of psychological and biomedical treatment, emphasizing how each of these forms of therapy is distinct from the others—both in its conceptual grounding and in its practice.

We have now described the major modes of psychological and biomedical treatment, emphasizing how each of these forms of therapy is distinct from the others—both in its conceptual grounding and in its practice. With respect to the psychological treatments, some modes of therapy focus on behaviors; some focus on thoughts and patterns of interpretation that the patient can see within himself; others focus on unconscious beliefs or memories. In some modes of therapy, the therapist actively givesinstructions or directions; in others, the therapist merely asks questions; in still others, the therapist is a quiet listener. With respect to the biomedical therapies, in pharmaco-logical treatments, newer generations of drugs are constantly being developed with the aim of targeting increasingly specific neurotransmitter systems. At the same time, nonpharmacological treatments are focusing on increasingly specific regions in the nervous system.

Even within this diversity of treatments—particularly psychological treatments—the forms of therapy have elements in common. These include establishing a strong rela-tionship with the patient, instilling hope, and offering new ways of thinking, feeling, and behaving (Frank & Frank, 1991; Miller, Duncan, & Hubbel, 2005). These shared elements must be considered when we ask how—or whether—therapy helps people with their problems.

Several benefits of therapy are not the direct result of any specific therapeutic tech-niques; instead, these benefits grow out of the relationship that the patient estab-lishes with the therapist (Figure 17.24). One of these benefits is simply that the patient gains an ally against his problems; this therapeutic alliance helps most patients believe that they really can conquer their difficulties and achieve better lives (Barber, Connolly, Crits-Christoph, Gladis, & Siqueland, 2000). In fact, some researchers believe that the therapeutic alliance is the most important ingredient in effective psychotherapy and is indispensable even when medication is the primary treatment. 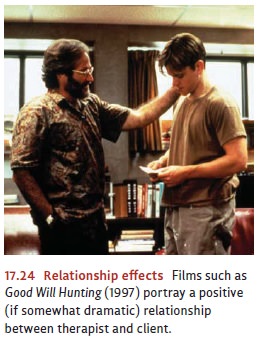 Why is the relationship so important? Among other considerations, it provides the patient with an intimate, confiding connection with another person, reassuring the patient that there is at least one other person in the world whom he can trust and who will help him. This connection also allows the patient to safely say things that otherwise might never be said, and in this fashion provides what some people think of as a kind of secular confessional.

People who seek help often feel discouraged and hopeless. They worry that their prob-lems are weird or shameful and either too trivial to warrant therapy or so severe that no treatment will work. They may yearn for, yet dread, the chance to reveal things they have kept secret, often for years.

All psychotherapists, regardless of their approach, spend a great deal of time hear-ing these concerns and secrets and responding to them in an accepting and nonjudg-mental manner. With some reassurance and a little education, patients often let go of their anxieties as they learn that their problems are understandable, rather com-mon, not shameful, and quite treatable. As the therapist confidently describes the rationale for treatment, and what benefits might be expected, the patient begins to feel hope for recovery, often for the first time. This hope is a crucial common factor across therapies.

The fostering of hope is also a feature of the biomedical therapies. When a patient speaks with a medical professional about his problems and finally hears a name given to what previously seemed a mass of unconnected symptoms, the patient often feels great relief. Hearing that a medication may help him, the patient may feel that at last there’s hope he may get better, which may amplify the drug’s effects. Indeed, as we will shortly see, placebo effects—which may arise because of an expectation that symptoms will improve—are so powerful that they need to be controlled whenever we try to test the effectiveness of a biomedical therapy.

People who seek treatment often feel “stuck” and unsure how to proceed with one or more aspects of their lives. Psychological or biomedical treatments can address these feelings by exposing the patient to new ways of thinking about their problems. In psychodynamic therapies, a patient may for the first time understand her role in inter-personal conflicts that seem to repeat themselves. In humanistic-experiential therapies, a patient may begin to appreciate her conflicting goals and see a path toward reconcil-ing them. In behavioral therapies, a patient may gain understanding of the triggers for his anxiety and develop confidence that he can interact with the feared object despite his anxiety. In cognitive-behavioral therapies, a new way of viewing the world may open up as the patient for the first time sees the powerful role of automatic thoughts that can make relatively innocuous events seem like life-or-death situations. Even in the biomedical therapies, a patient may gain an appreciation of the biological processes that underlie his mental disorder and come to view this disorder as just as treatable as other medical problems. In each case, new ways of thinking provide the basis for healthier and more adaptive ways of feeling and behaving.

In light of these common factors, it seems likely that the various forms of therapy all contain some of the same “active ingredients.” Of course, the trend toward multimodal therapy, in which therapists from each tradition borrow ideas and techniques from other traditions, also leads to increasing overlap among their approaches.

Another development that makes the distinctions between therapy types less clear-cut is that many therapists join a multimodal approach to psychotherapy with medica-tion. Indeed, one survey indicates that more than half the patients being treated for mental disorders receive both drugs and psychotherapy (Pincus et al., 1999). Thus, for example, patients suffering from depression are often treated with antidepressants and cognitive-behavioral therapy, with the aim that the drugs will ease the patients’ distress in the short term and the therapy will provide longer-lasting effects (DeRubeis, Siegle, & Hollon, 2008; Hollon & Fawcett, 1995). By a similar logic, patients suffering from anxi-ety disorders often receive medication as well as psychotherapy (Walkup et al., 2008).