We have seen that Freud played a pivotal role in launching the treatment that we now call psychotherapy; indeed, the idea of a “talking cure” that could help someone deal with mental distress through conversation or instruction was essentially unknown before Freud.

We have seen that Freud played a pivotal role in launching the treatment that we now call psychotherapy; indeed, the idea of a “talking cure” that could help someone deal with mental distress through conversation or instruction was essentially unknown before Freud. Nonetheless, most modern psychotherapists employ methods very different from Freud’s and base their therapies on conceptions that explicitly reject many of Freud’s ideas.

As we discussed, psychologists who take a humanistic approach have regarded psychoanalysis as being too concerned with basic urges (like sex and aggres-sion) and not concerned enough with the search for meaning. This orientation led them to propose several different types of therapy, which have in common the idea that people must take responsibility for their lives and their actions and live fully in the present.

Carl Rogers’s client-centered therapy seeks to help a person accept himself as he is and to be himself with no pretense or self-imposed limits. In this therapy, the ther-apist listens attentively and acceptingly to the patient (Figure 17.4). The therapist is not there to question or to direct, but to create an atmosphere in which the patient feels valued and understood (Rogers, 1951, 1959). Based on his analysis of his own and others’ therapeutic attempts, Rogers concluded that three factors were crucial to a therapist’s success: genuineness, or sharing authentic reactions with the patient; unconditional positive regard, which refers to a nonjudgmental and accepting stance; and empathic understanding, which refers to sensing what it must be like to be in the patient’s shoes (Rogers, 1980). 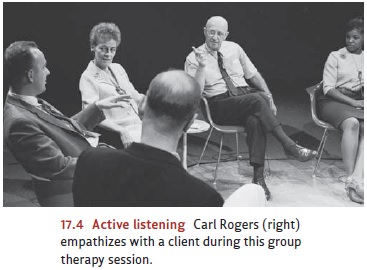 Rogers’s therapeutic stance is evident in the following interaction with a patient:

PATIENT: I cannot be the kind of person I want to be. I guess maybe I haven’t the guts or the strength to kill myself, and if someone else would relieve me of the responsi-bility or I would be in an accident, I—just don’t want to live.

ROGERS: At the present time things look so black that you can’t see much point in living.

PATIENT: Yes, I wish I’d never started this therapy. I was happy when I was living in my dream world. There I could be the kind of person I wanted to be. But now there is such a wide, wide gap between my idea and what I am . . .

ROGERS: It’s really tough digging into this like you are, and at times the shelter of your dream world looks more attractive and comfortable.

PATIENT: My dream world or suicide . . . So I don’t see why I should waste your time coming in twice a week—I’m not worth it—what do you think?

PATIENT: You’re not going to suggest that I come in oftener? You’re not alarmed and think I ought to come in every day until I get out of this?

ROGERS: I believe you’re able to make your own decision. I’ll see you whenever you want to come.

PATIENT: I don’t believe you are alarmed about—I see—I may be afraid of myself but you aren’t afraid for me.

ROGERS: You say you may be afraid of yourself and are wondering why I don’t seem to be afraid for you.

PATIENT: You have more confidence in me than I have. I’ll see you next week, maybe.

[The patient did not attempt suicide.]

Rogers’s client-centered therapy has, in turn, inspired a number of other forms of intervention, one of which is motivational-enhancement therapy (Miller & Rollnick, 2002). This is a brief, nonconfrontational, client-centered intervention designed to change problematic behavior (such as alcohol and other drug use) by reducing ambiva-lence and clarifying discrepancies between how individuals are actually living and how they say they would like to live (Ball et al., 2007).

A second humanistic therapy is Fritz Perls’s Gestalt therapy. Perls was a highly charismatic and original clinician who was trained psychodynamically but drew inspi-ration from the gestalt theory of perception. Perls believed that psycho-logical difficulties stemmed from a failure to integrate mutually inconsistent aspects of self into an integrated whole or gestalt. His techniques were aimed at helpingpatients become aware of and then integrate disparate aspects of self by increasing self-awareness and self-acceptance (Perls, 1967, 1969).

For example, Perls was famous for asking his patients about what they were feeling in the moment, and for pointing out apparent discrepancies between what they said they felt and how they appeared to be feeling. Perls also used the empty chair technique, in which a patient imagines that he is seated across from another person, such as his parent or his partner, and tells him honestly what he feels. Using such strategies, Perls helped his patients acknowledge and confront their feelings.

In more modern versions of humanistic therapies—collectively referred to as the experiential therapies—these approaches are integrated, seeking to create a genuinelyempathic and accepting atmosphere but also to challenge the patient in a more active fashion with the aim of deepening his experience (Elliott, Greenberg, & Lietaer, 2004; Follette & Greenberg, 2005). This approach views the patient and, indeed, all humans as oriented toward growth and full development of their potential, and the therapist uses a number of techniques to encourage these tendencies.

Although these challenges to live more actively and deeply can be disconcerting, experiential therapies involve genuine concern and respect for the person, with an emphasis on all her qualities, and not just those symptoms that led to a particular diagnosis. The person’s subjective experience is also a primary focus, and the thera-pist tries to be as empathic as possible, in order to understand that experience. Moreover, experiential therapists reject Freud’s notion of transference; in their view, the relationship between patient and therapist is a genuine connection between two people, one that provides the patient with an opportunity for a new, emotionally validating experience.