Like the humanistic therapies, behavior therapies emerged in part as a reaction to the Freudian tradition of psychoanalysis. 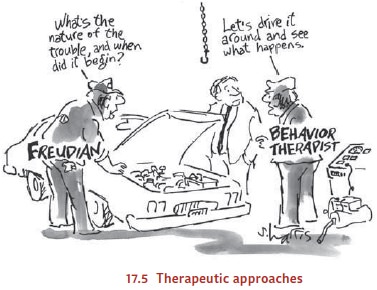 Behavior therapists focus on overt behavior rather than uncon-scious thoughts and wishes, which they regard as hard to define and impossible to observe. The patient’s behaviors, in other words, are not regarded as “symptoms” through which one can identify and then cure an underlying illness. Instead, these therapists view the maladaptive behaviors themselves as the problem to be solved. These behaviors, in turn, are, from a behaviorist’s perspective, simply the results of learning—albeit learning that led the person to undesired or undesirable behaviors.

The remedy, therefore, involves new learning, in order to replace old habits with more effective or adaptive ones. For this purpose, the therapeutic procedures draw on the principles of behavior change that have been well documented in the laboratory— classical conditioning, operant conditioning, and modelling.

To see how behavior therapy proceeds, consider the treatment for specific phobias (Emmelkamp, 2004; Wolpe & Plaud, 1997). According to behavior therapists, the irra-tional fears that characterize these phobias are simply classically conditioned responses, evoked by stimuli that have become associated with a truly fearful stimulus. The way to treat these phobias, therefore, is to break the con-nection between the phobic stimuli and the associated fears, using a technique akin to the extinction procedures that are effective in diminishing conditioned responses in the laboratory.

One early version of this procedure is the technique originally known as systematic desensitization, now referred to as exposure therapy. Here, the therapist seeks not only to break the connection between the phobic stimulus and the fear response but also to create a new connection between this stimulus and a different response, one that is incompatible with fear and will therefore displace it (Figure 17.6). The new response is usually deep muscular relaxation, and the patient is taught a relaxation technique, typically through meditation-like exercises, before the formal therapy begins. Then, once the patient has learned to relax deeply on cue, the goal is to condi-tion this relaxation response to the stimuli that have been evoking fear.

To begin the therapy, the patient constructs an anxiety hierarchy, in which feared sit-uations are identified and then ranked from least to most anxiety provoking. This hier-archy is then used to set the sequence for therapy. The patient starts out by imagining the first scene in the hierarchy (e.g., being on the first floor of a tall building) while in a state of deep relaxation. He will stay with this scene—imagining and relaxing—until he no longer feels any anxieties. After this, he imagines the next scene (perhaps look-ing out a fourth-floor window in the building), and this scene, too, is thoroughly “counter-conditioned,” meaning that the old link between the scene and an anxiety response is broken, and a new link between the scene and a relaxation response is forged. The process continues, climbing up the anxiety hierarchy until the patient finally can imag-ine the most frightening scene of all (leaning over the railing of the building’s observa-tion tower, more than 100 floors above the ground) and still be able to relax.

Sometimes this imagined exposure is sufficient to treat the phobia, but often patients need to extend the graduated exposure to the real world—for example, actu-ally visiting a tall building rather than merely thinking about one. This process, called in vivo desensitization, may take place with the therapist present or may use guidedhomework assignments (Figure 17.7; Craske, 1999; Goldfried & Davison, 1994). In addition, interactive computer graphics now provide yet another option: exposing the patient to a virtual-reality version of the frightening stimulus, which seems to be another way to extend and strengthen the desensitization procedure (Figure 17.8; see, for example, Emmelkamp et al., 2002). However the feared stimulus or situation is presented, exposure is a key ingredient in therapeutic success. 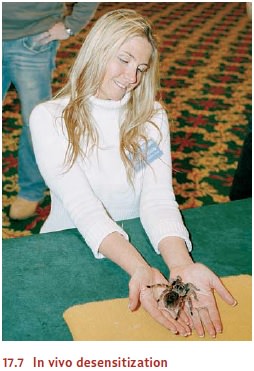 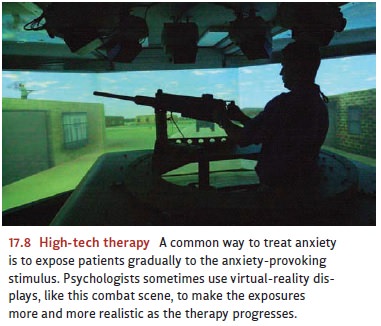 A second set of behavioral techniques is based on the principles of instrumental or operant conditioning. These techniques aim to change behavior through reinforcement by emphasizing the relationship between acts and consequences.

An example of this approach is the use of token economies in hospital psychiatric wards. In these settings, patients earn the tokens through various helpful or healthy behaviors such as making the bed, being neatly dressed, or performing ward chores. They can then exchange tokens for desirable items, such as snacks or the chance to watch TV. In this fashion, the patient is systematically rewarded for producing desirable behaviors and is not rewarded for producing undesirable ones.

As in the learning laboratory, the reinforcement contingencies can then be gradu-ally adjusted, using the process known as shaping. Early on, the patient might be rein-forced merely for getting out of bed; later, tokens might be awarded only for getting out of bed and walking to the dining hall. In this fashion, the patient can be led, step-by-step, to a higher level of functioning. The overall effects of this technique are that the patients become less apathetic and the general ward atmosphere is much improved (Higgins, Williams, & McLaughlin, 2001).

Other reinforcement procedures can be useful in individual behavior therapy as part of contingency management. In this procedure, the person learns that certain behav-iors will be followed by strict consequences (Craighead, Craighead, Kazdin, & Mahoney, 1994). For example, a child who is oppositional and defiant can be presented with a menu of “good behaviors” and “bad behaviors,” with an associated reward and penalty for each. Being a “good listener” can earn the child the chance to watch a video, cleaning up her room every day can get her a dessert after dinner, and so forth, whereas talking back to Mom or making a mess may result in an early bedtime or a time-out in her room. The idea is not to bribe or coerce the child but to show her that her actions can change the way people react to her. Ideally, her changed behavior will result in a more positive social environment that will eventually make explicit rewards and pun-ishments unnecessary.

These operant techniques have been applied to a number of mental disorders. In one study, parents spent 40 hours a week attempting to shape the behavior of their uncom-municative 3-year-olds who had autism (Lovaas, 1987). By first grade, more than half of the children were functioning successfully in school, and these treatment gains were still evident four years later (McEachin, Smith, & Lovaas, 1993). In a group of 40 compara-ble children who did not receive this intervention, only one child showed comparable improvement by first grade. Others have applied this technique to other serious mental disorders such as mental retardation, with positive results (Reid, Wilson, & Faw, 1991).

One last (and powerful) technique for the behavior therapist is modeling, in which someone learns new skills or changes his behavior by imitating another person (Figure 17.9). Sometimes, the therapist serves as the model, but this need not be the case. Therapy with children, for example, may draw on young “assistants” (children roughly the same age as the child in therapy) who work with the therapist and model the desired behaviors or skills. 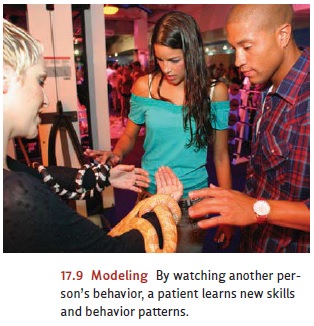 Modeling is not limited to overt behaviors; a therapist can also model a thought process or a decision-making strategy. In some forms of therapy, the therapist “thinks out loud” about commonplace decisions or situations, in this way providing a model for how the patient should consider similar settings (Kendall, 1990; Kendall & Braswell, 1985). Likewise, modeling can be used for emotional responses, so that, for example, the therapist can model fearlessness in the presence of some phobic stimulus and in this fashion diminish the phobia (Bandura, 1969, 2001).