Maintenance activities commonly take the form of a project with many dependent operations forming a network of connected operations.

Scheduling is one of the areas that received considerable attention from researchers as well as practitioners in all types of applications including operations scheduling and project scheduling. Techniques are developed to develop optimum or near optimal schedules with respect to different possible performance measures. This chapter highlights some of these techniques and their application in maintenance scheduling.

Maintenance activities commonly take the form of a project with many dependent operations forming a network of connected operations. In such cases, project management techniques can be utilized for scheduling the maintenance operations. The two primary network programming techniques used in project scheduling are the critical path method (CPM) and program evaluation and review technique (PERT). Each was developed independently during the late 1950s. The main difference between the two is that CPM uses a single estimate of activity time duration while PERT uses three estimates of time for each activity. Hence, CPM is considered to be a deterministic network method while PERT is a probabilistic method. Both networks consist of nodes representing activities and arrows indicating precedence between the activities. Alternatively, arrows may represent activities and nodes represent milestone. Both conventions are used in practice. Here we are going to use the former.

The objective in both CPM and PERT is to schedule the sequence of work activities in the project and determine the total time needed to complete the project. The total time duration is the longest

sequence of activities in the network (the longest path through the network diagram) and is called the critical path. Before we proceed by explaining the two methods it is worth noting that PERT and CPM are not well suited for day-to-day independent small jobs scheduling in a maintenance department. However, they are very useful in planning and scheduling large jobs (20 man hours or more) that consist of many activities such as machine overhauls, plant shut downs, and turnaround maintenance activities. Furthermore, a prerequisite for the application of both methods is the representation of the project as a network diagram, which shows the interdependencies and precedence relationships among the activities of the project.

Formulating the maintenance project as a network diagram helps in viewing the whole project as an integrated system. Interaction and precedence relationships can be seen easily and be evaluated in terms of their impact on other jobs. The project network representation will be demonstrated by an example from maintenance. Table 11.2 shows the data for overhauling a bearing in a train cargo carriage. The data shows the normal, crash duration, their corresponding costs, and precedence relationships for each activity. The term crash time refers to the minimum time the job can be accomplished in (by committing more resources), beyond which no further reduction in the job duration can be achieved. At this duration any increase in the resources for this job will increase the cost without reducing the duration. 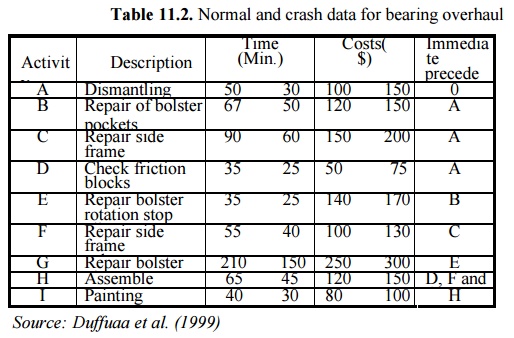 Figure 11.8 shows the network corresponding to the data in the table. It starts with node A with no predecessor activity and it is represented by a circle nearby a number indicating the time. A itself is a predecessor for three activities B, C, and D drawn as three circles connected to A by arrows to indicate the precedence relation with A. Other activities (nodes) are traced back similarly. The resulting network is terminated by node I that has no successor. 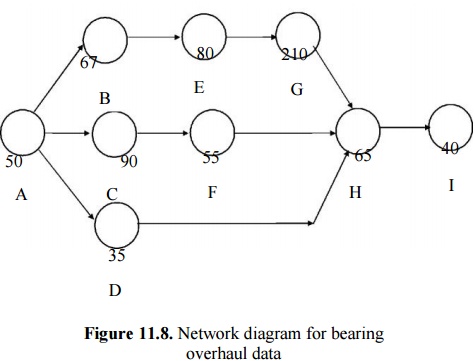 There are many paths through the network in Figure 11.8 starting from the first node to the last node. The longest one is called the critical path and the summation of the activity times along that path is the total project duration. Jobs in the critical path are called critical in the sense that any delay in these jobs would cause a delay in the whole project. All other paths include slack times (sometimes called floats), i.e., the amount of extra time that activities in the path can be delayed without delaying the completion time of the whole project. Activities that are not in the critical path may have some slack times, i.e., delaying this activity for one reason or another will not delay the whole project. In this example there are three possible paths shown in Table 11.3. Critical activities must be monitored carefully and adhere to their specified schedules; however, non-critical activities can be used for leveling the resources due to the available slacks.

Clearly the project duration is 467 min and the critical path is the first path (A- B-E-G-H-I). Paths 2 and 3 have slacks of 167 and 277 min respectively. In this example, it was easy to go through all possible paths to find the one with the longest time; however, it would be extremely difficult to do the same for larger projects having a large number of activities and more complicated between them. A systematic approach for identifying the critical path is known as the critical path method (CPM).