All material surfaces, no matter how smooth they are, show many irregularities in the form of peaks and valleys, which are large when considered on a molecular scale.

All material surfaces, no matter how smooth they are, show many irregularities in the form of peaks and valleys, which are large when considered on a molecular scale.

When these two solid surfaces are pressed over or slide over each other, a real contact between these surfaces occurs that will cause friction and consequently the production of heat. During the motion of the sliding surfaces, a considerable amount of frictional heat is evolved at the rubbing surface. This results in high local temperature even under relatively light loads and speeds. This friction also causes a lot of wear and tear of the surfaces of the moving parts.

Even under small load, the local pressure at the peaks of the metals may be sufficiently great to cause appreciable deformation in ductile metals. If two materials of different hardness slide over one another, the peaks of the softer metal get broken more easily than the peaks of the harder metals.

Lubrication reduces friction between the moving surfaces or rolling pairs. The lubricant

also acts as a coolant carrying heat away from the sliding surfaces, so proper lubrication of all the moving parts is an important function in machinery or engine operation. By lubrication we keep the moving surfaces separated by a fluid of some defined property

Considering the nature of motion between moving or sliding surfaces, there are different types of mechanisms by which the lubrication is done. They are:

Hydrodynamic lubrication is said to exist when the moving surfaces are separated by the pressure of a continuous unbroken film or layer of lubrication. In this type of lubrication, the load is taken completely by the oil film.

The basis of hydrodynamic lubrication is the formation of an oil wedge. When the journal rotates, it creates an oil taper or wedge between the two surfaces, and the pressure build up with the oil film supports the load.

Hydrodynamic lubrication depends on the relative speed between the surfaces, oil viscosity

, load, and clearance between the moving or sliding surfaces.

In hydrodynamic lubrication the lube oil film thickness is greater than outlet, pressure at the inlet increases quickly, remains fairly steady having a maximum value a little to the outside of the bearing center line, and then decreases quickly to zero at the outlet.

Hydrocarbon oils are considered to be satisfactory lubrication for fluid film lubrication. In order to maintain the viscosity of the oil in all seasons of the year, ordinary hydrocarbon lubricants are blended with selected long chain polymers.

Example: the cross head pin bearing or gudgeon pin bearing in two stroke engines employs this hydrostatic lubrication mechanism. In the cross head bearing, the load is very high and the motion is not continuous as the bearing oscillation is fairly short. Thus hydrodynamic lubrication cannot be achieved. Under such conditions, hydrostatic lubrication offers the advantage. The oil is supplied under pressure at the bottom of bearing. The lube oil pump pressure is related to the load, bearing clearance, and thickness of the oil film required, but is usually in the order of 35-140 kg/cm2 . 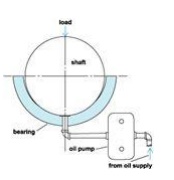 Boundary lubrication exists when the operating condition are such that it is not possible to establish a full fluid condition, particularly at low relative speeds between the moving or sliding surfaces.

and stopping of engine).

piston direction changes and if the relative speed is very slow.

When the moving or sliding surfaces are under very high pressure and speed, a high local temperature is attained. Under such condition, liquid lubricant fails to stick to the moving

parts and may decompose and even vaporize. To meet this extreme pressure condition, special additives are added to the minerals oils. These are called “extreme pressure lubrication.” These additives form on the metal surfaces more durable films capable of withstanding high loads and high temperature. Additives are organic compounds like chlorine (as in chlorinated esters), sulphur (as in sulphurized oils), and phosphorus.