The production rooms are normally divided into a hatchery, a first feeding department and an on-growing department.

Hatchery designs are based on the species farmed. For some species separate rooms are used for the incubation of fertilized eggs and for the hatching of the eggs, because different production units are required; water temperature and light conditions may also be different. In a hatchery for salmonids, for example, it is common to use trays with 40 cm × 40 cm troughs (Fig. 21.15).Two to four trays are used in a stack, and are commonly 2.1 m or 3.6 m long.The water inlet is at one end of the tray and the outlet is at the other. To control the eggs easy accessibility to all units is important. Because of this it is rather dif-ficult with four tray stacks. If producing eye eggs for salmonids, cylinders may be used; this will, however, require another arrangement. Two cylinders placed at different heights on both sides of the walkway might be used. 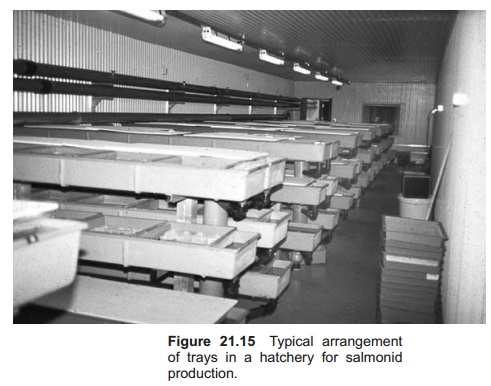 The main inlet pipeline to the hatchery comes from the feeder tank. It is recommended that there is a separate supply to the hatchery to provide water at the correct temperature and quality; this can also include removal of smaller particles, use of protein skimmers and disinfection of the water. The flow rate to the hatchery will be quite low. Inlet pipes are either run along the wall or in the roof with valves to the separate trays. The main outlet pipeline is laid in the floor (see below).

To avoid disease transfer when personnel enter the hatchery, they must first pass through a disinfection area. If selling eggs, there should be a room specially for disinfection and packaging of eggs. Personnel movement between these rooms should be avoided. A hatch in the wall that connects the two rooms might be a solution. Between the hatchery and the first feeding department the use of a hatch in the wall to avoid movement of personnel and possible disease transfer is also common (Fig. 21.16). 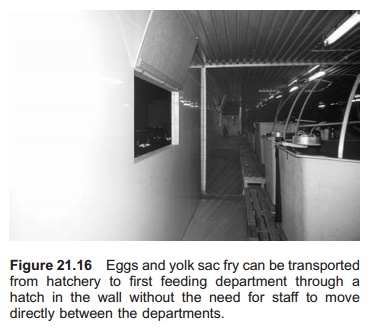 Normally no windows are used in the hatcheries. Sunshine may injure the eggs of some species. Some light sources must also be avoided because they can damage the eggs; for example, blue–violet light tubes. Photomanipulation is also necessary for some species, and having no windows makes this possible. Some species will also require total darkness, or the use of only red light during some periods in the hatchery; for example, halibut.

The hatchery must be easy to clean and disinfect between the hatching seasons. It is important to remember this when designing the roof and walls, and installing the equipment.

If a combined hatching and start feeding is used, a mixed department is built and there is no sepa-rate hatchery. In smaller farms this might be a good solution, but of course, this has disadvantages concerning disease control.

The first feeding department is normally a separate room, but can also be combined with the hatchery or be a part of the on-growing department. Tank sizes also vary with the species; this is also the case with the method of first feeding, for instance if live feed is used. Normal tanks sizes are in the range 1–8 m2 surface area.

It is important to have good accessibility, because first feeding is normally the most difficult stage in the production cycle and where control is most important (Fig. 21.17). The lighting conditions over every tank must therefore ensure good visibility. The foundations of the production results are laid in this department. 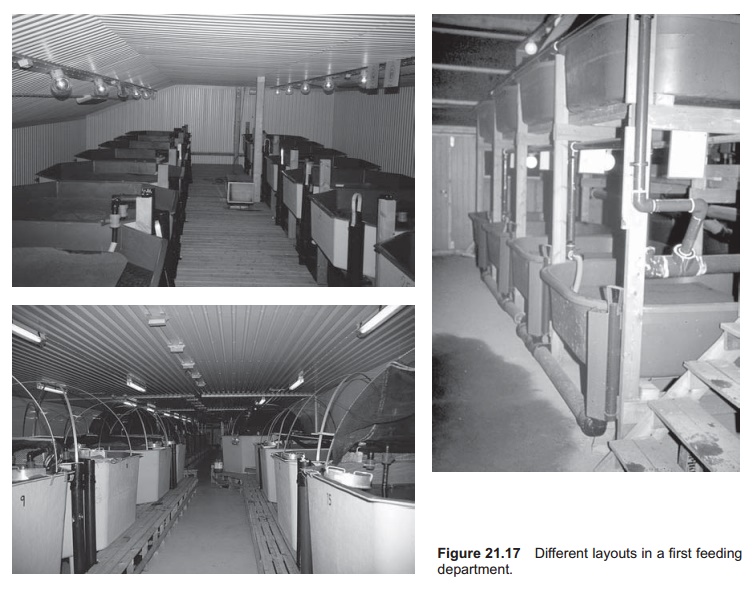 Two storey tanks could be used, but this arrangement can inhibit the accessibility and control of the tanks and is a challenge in the planning process (Fig. 21.17). The water can be supplied directly from a general feeder tank or warm water can be sup-plied from a separate feeder tank. Photomanipulation can be used to improve the first feeding results, so no windows are required in this department. The tanks can be placed along the walls or in the centre, or both with wider buildings. Walkways between the tank rows must be at least 1 m wide, or wider, depending on the systems used for transport of feed and fish.

The on-growing department can be inside or outside. It has become quite common to have parts of it inside, because of possibilities for photoma-nipulation, increased growth and better disease control, even if this increases the costs. If the on-growing department is outside it is normal to have a bird net above to protect the fish from birds. This may also be combined with a shadow net that shades the fish from the sun and protects some species against sunburn.

The tanks are normally quite large with a diameter of 5–20 m and water height up to 5 m. Because of their size it can be cheaper to have individual superstructures for the tanks. The recommended tank shape is circular, or square with cut corners. Circular tanks optimize material utilization, while square tanks optimize utilization of the farming area. 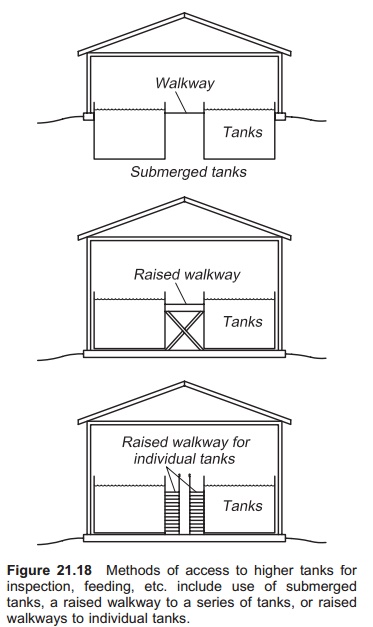 Depending on the arrangement of the tanks, the plan can be similar to that in the first feeding department. Because the tanks are normally higher, visual control of the fish in them can be a problem. The following solutions can be used (Fig. 21.18):

Raised walkways are simply constructed. If using a building, all installations can theoretically be on the floor and the building will then have a high second hand value. Submerged tanks are best for fish farming purposes from the point of view of hygiene, and all the area around the tanks is easy to clean.

This requires a concrete floor, located on the upper part of the tanks. On very large tanks (>10 m) a walkway across, like a bridge, can be used to increase the general view of the fish in the tanks.

Since the fish are now larger, the methods chosen for fish handling are more important. More feed is also used, and the feed handling method will there-fore also influence the design.

The water supply can be routed on the walls, in the roof or in the middle of the room. Normally, the water is supplied in pipes, but open channels can also be used although they create more noise and water under pressure cannot be used. A continuous fall from the feeder tank to all the production tanks is required.

It is important that the main inlet pipe is large enough to avoid significant variations in the total flow if the water flow to one tank is increased. Alternatively, the main pipeline can be installed as a ring connected at both ends (Fig. 21.19). This equalizes the pressure at each point in the pipeline, and ensures enough water in the tanks at the end of the pipeline. Use of a ring pipeline will also eliminate the risk of stagnant water staying in the pipeline, when some length of the pipe is not in use. In seawater this can be a particular problem because of the biological processes that occur in the stagnant water. 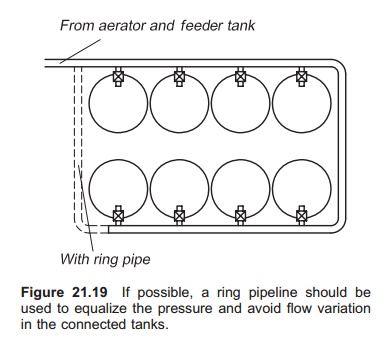 The water velocity is normally between 1 and 1.5 m/s; flows over 1.5 m/s create high head loss. Lower velocities are advantageous in achieving a largerreservoir and reducing the variation in flow. However, settling in the pipes may now be a problem and it must be possible to flush the pipes out to remove this and prevent blockages. The valves through which the water flows to the indi-vidual tanks are set in the sides of the inlet pipe, not the bottom, to avoid settling in closed or partially open valves. One valve is set in the bottom to flush and clean the main inlet pipe. It is best to have a slope from the inlet reservoir to the valves, and from the valves to the fish tank. The main pipeline can also be close to the floor, or below the floor with vertical pipes up to the single tanks. When using such systems, care must be taken to avoid air locks in the pipelines; degassing valves can be used at critical points in the pipe system. Degassing of the inlet pipe is especially critical when using oxygenated water.

The outlet pipeline starts in the tank. To avoid fouling and blockages the use of 90° bends in this pipeline is not recommended; bends should be as shallow as possible. This will also result in a more gentle treatment of the faeces, so crushing to smaller particles can be avoided. The head loss through the outlet system will also be reduced.

It is easy to get sedimentation in and blockage of the outlet pipes. To prevent this, a slope on the pipes of a least 0.5%/m is recommended. In addition it must be possible to flush and plug the pipes. When designing the system these requirements must be met.

For laying the outlet pipes inside the farm, several systems are employed (Fig. 21.20):

All the alternatives have advantages and disadvantages. Method (1) is best for avoiding smell from the outlet and getting a surface inside the farm that is easy to clean. A major disadvantage is that lack of access prevents remedial measures being taken when something happens. Later reconstructions of the piping system are also difficult. Open channels create much noise and are a source of unwanted 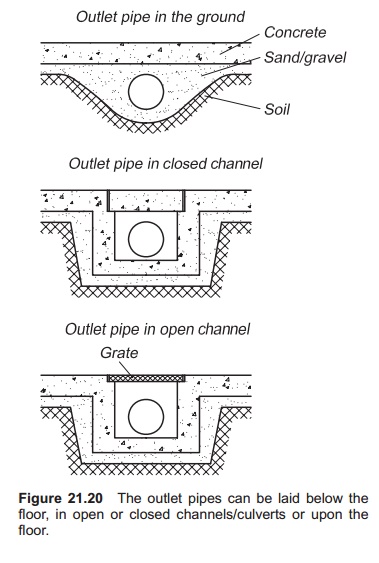 smell, but are reasonably cheap. Method (4) is not recommended, because it will prevent adequate cleaning of the floor. Its great advantage is, however, that no special arrangement is necessary and that re-use of the buildings for other purposes is easy. Instead of laying pipes directly on the floor, it can be possible to hang them in the tanks, depending on the tanks used, and then use racks to bring the tanks to a correct working height.

Outlet pipes are not always filled with water; two phases can flow, with air above the water. The velocity ought to be above 0.3 m/s to avoid settling of solids; otherwise a good slope and easy flushing and plugging must be possible.