Equipment for feeding and feed handling, and systems for handling fish are important on intensive fish farms because they are used so much. A great deal of equipment is available here.

Equipment for feeding and feed handling, and systems for handling fish are important on intensive fish farms because they are used so much. A great deal of equipment is available here.. This equipment can to some degree be an integral part of the farm construction, or it can be portable. Therefore the choice of equipment influences the design of the farm, so if a farm is established using a particular system, much reconstruction can be necessary if it is later decided to change that system.

Some types of feeding equipment are commonly used on all intensive land-based farms. This can range from simple feeders on a single production unit, to larger automated central feeding systems or feeding robots. Automation of the feeding system depends on the amount of feed used. It is important that the complete handling process for the feed from delivery to end use is well thought out. The necessary components in the handling line will, of course, depend on the chosen feeding system; if a feeding robot or a complete feeding system is used, the feed must be stored in silos.

If using traditional feeders, the feed must be taken from the store to the fish tanks. Alternatives for performing this operation can be to carry sacks, or to use a trolley or wheelbarrow. Trolleys or wheelbarrows set requirements for the width of the walkways. The feed is normally lifted from floor level up into the hoppers of the feeders manually. The hoppers must therefore be easy to fill. The farm may also be designed with two storeys, a first floor in addition to the ground floor. Feed is stored on the first floor; this is also where hoppers to the tanks on the ground floor are filled, so gravity is utilized and heavy lifting avoided.

Fish handling is an important part of the work in an intensive farm, and equipment for doing this is important, especially when the number of fish and size increase. Reasons for handlings are various and include moving between departments, dividing groups to avoid excessive density, size grading and when delivering fish. Also here it is important to think in complete handling lines, where the fish are taken from the production unit and sent back to the tank. A handling line for moving fish may, for instance, include:

·  Crowding in the tank

·  Vertical transport out of the tank

The first operation, crowding, can be brought about by (1) reducing the water level (it must then be possible to reduce the water level in the tank), (2) using a rotating grid, (3) having removable tank bottom. For the second operation, vertical transport out of the tank, the following methods can be used: (1) net, (2) pumps of various types, such as centrifugal that is lowered into the tank or the handling centre, vacuum (pressure) that also sucks up fish, ejector or airlift that require deep tanks, (3) transport tanks lifted with a forklift truck, (4) fish screw (needs a large area). For horizontal transport the following methods are used: (1) dip net and/or buckets, (2) transport tank, (3) pipelines.

The handling system may also be an integral part of the farm (Fig. 21.22). Examples of such systems are: (1) a centrally placed pumping chamber to where the fish are tapped through in pipelines from all tanks, (2) by having pump adaptors close to the bottom in all tanks and a centrally placed pump, (3) pipelines near the top of all tanks, into which the fish are poured after using a dip net to take them out the tank. 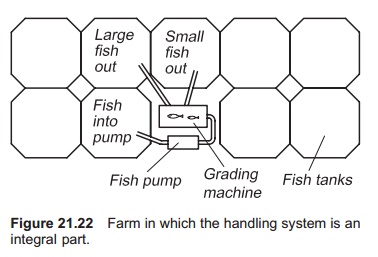 For larger fish the tanks may be equipped with hatches through which the fish either swim voluntarily or are forced to go when the water level is reduced. The first system only requires one channel between the tanks, and there is a combination of 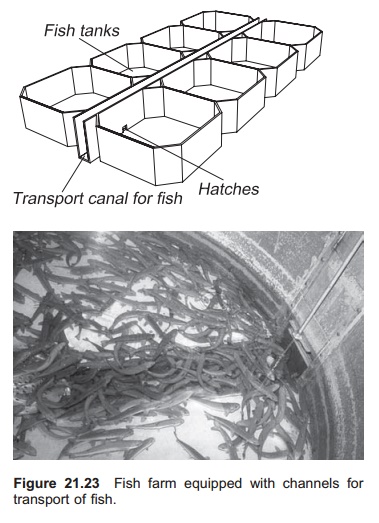 voluntary and forced movement by movable grids (Fig. 21.23). The second system is based on channels on two floors and an elevator that lifts the fish between the two levels (Fig. 21.24). This system functions as follows. The water level in the tank is reduced and the fish are forced to leave via the hatch in the tank wall. There is a slope on the 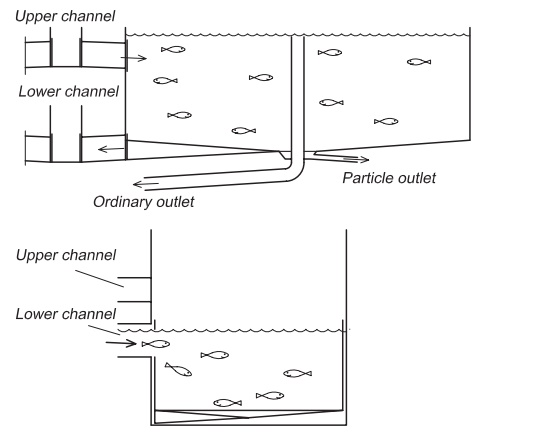 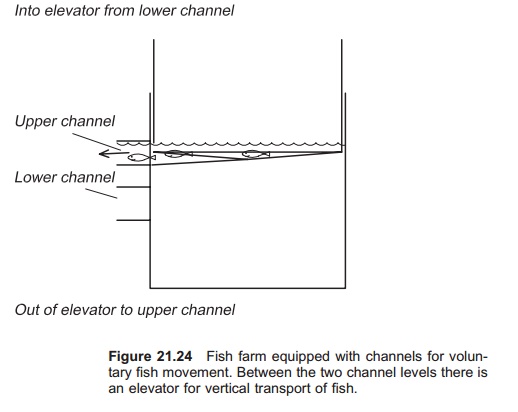 bottom in the lower channel and by continuously reducing the water level the fish are forced into the elevator at the end of the channel system. One tank inside the silo constitutes the elevator. The fish from one tank are collected in the elevator that is actually an ordinary fish tank. By closing the inlet hatch to the elevator and supplying water to the silo the water level will increase and the tank that floats inside will move upwards like an elevator. When the tank reaches the upper channel level the hatch is opened and the fish will start to swim out; by continuing the elevating process they will gradually be forced to leave. After this the water level in the upper channel will be gradually reduced and the fish forced back into their tank. Then fish from a new tank can be moved in a stepwise process.

The solutions for size grading must also be decided before the farm is established. If the farm is small and small amounts of fish are going to be graded, a cradle used directly in the production tanks might be a solution. Otherwise a machine can be used, such as a roller, belt or band type. If using a level grader the high head loss must be remembered. If thinking about the complete system, the grading machine can be placed in a grading centre, or it can be portable and moved to the tank that is to be graded. In the latter case it is important to have sufficient space in the walkways to place the grader.