Net handling represents a major part of the total workload on a sea cage farm, and requires additional equipment.

Net handling represents a major part of the total workload on a sea cage farm, and requires additional equipment. For many sites fouling is a large problem for nets in the sea and to reduce the degree of fouling the mesh size needs to be as large as possible. This means that it is an advantage to change the nets according to fish growth, so as large a mesh size as possible can be maintained. One or two sizes are typically used per year, but this depends on growth and species; nets can be much more frequently changed on exposed sites. Net exchange is heavy work, especially on larger cages; large cranes are required to handle the nets. This is also one reason for using subcontractors, because they have large equipment specially adapted for the purpose.

If there is much fouling on the site cleaning or washing of the nets is necessary. This ensures enough water passes through the net panel to supply oxygen and remove waste products. On exposed fouling sites, the nets need to be washed several times a year, up to once a month. Washing may either be done when the net bags are standing in the sea, or they can be removed and taken to shore for washing. Special washing equipment is used by divers to wash nets in the sea. If the nets are taken to shore, large washing machines are 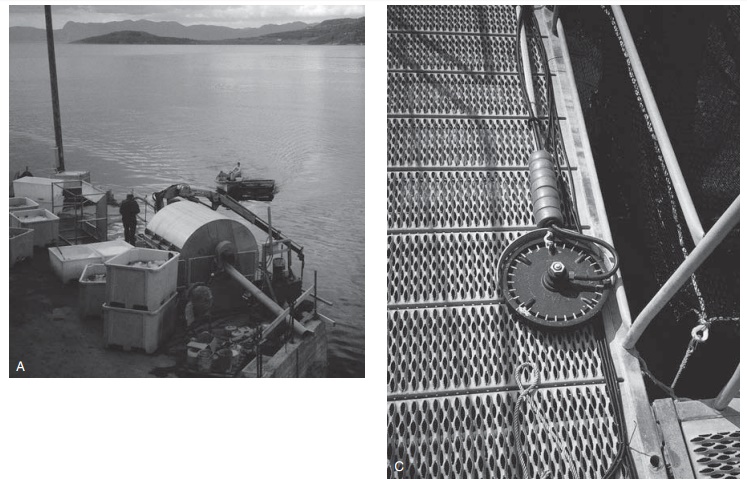 used. These machines are similar to a traditional domestic washing machine but have a larger drum into which the nets are loaded (Fig. 21.31). The effluent from the washing machines has a high content of fouling materials. This is discharged at one place through the outlet pipe and the point outlet may be too high. Today there are calls for purification of wastewater from such washing machines; there is a particular problem with dis-charge of antifouling agents, because normally at least 20% of the antifouling agents remain on the nets at the start of the washing process.

The nets will also need regular repair, because the mesh will break. This is normally done in connection with washing and before the nets are set out again.

It is also usual to treat the net with an antifouling agent to inhibit fouling so that they can stay in the sea for longer before removal for washing. Copper-based antifouling agents are widely used and quite effective. However, there are environ-mental concerns regarding the use of copper, but no other antifouling agents have so far achieved the same efficiency. Different types of biocides may be used, but there are also environmental concerns about these. Much research is being undertaken to find alternatives. Before setting out the impreg-nated nets they are dried so that the antifouling stays on the net.