In this section, we shall consider how enzyme-catalysed reactions are involved in the cellular capture and utilisation of energy.

In this section, we shall consider how enzyme-catalysed reactions are involved in the cellular capture and utilisation of energy.

Energy taken up by the cell, be it in the form of nutrients or sunlight, must be converted into a usable form. A simple analogy is selling goods for cash, which you can then use to buy exactly what you want. The ‘cash’ of cellular metabolism is a compound called adenosine triphosphate (ATP). ATP is by far the most important of a class of compounds known as high-energy transfer compounds, which store the energy* from the breakdown of nutrients (or trapped by photosynthetic pigments) and release it when required by the cell. In catabolic reactions, in which molecules such as glucose are broken down, energy is released in the form of ATP, which can then be utilised in anabolic (synthetic) reactions. 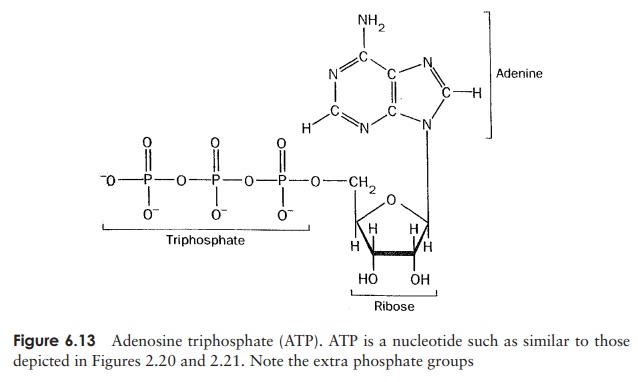 ATP has a structure very similar to the nucleotides found in RNA, except it has two additional phosphate groups (Figure 6.13). The bond that links the third phos-phate group requires a lot of energy for its formation, and is often referred to as a ‘high-energy’ phosphate bond. Importantly for the cell, when this bond is broken, thesame large amount of energy is released, so when ATP is broken down to ADP and a free phosphate group, energy is made available to the cell. It should be noted that ‘high-energy’ refers to the amount of energy needed to make or break the bond, and not to any intrinsic property of the bond itself. The process of adding or removing a phosphate group is called phosphorylation or dephosphorylation, respectively.