Many metabolic reactions involve the transfer of electrons from one molecule to another; these are called oxidation-reduction or redox reactions. When a molecule (or atom or ion) loses an electron, it is said to be oxidized.

Many metabolic reactions involve the transfer of electrons from one molecule to another; these are called oxidation-reduction or redox reactions. When a molecule (or atom or ion) loses an electron, it is said to be oxidized. (Note, that despite the terminology, oxygen does not necessarily take part in the reaction.) Conversely, when an electron is gained, the recipient is reduced (Figure 6.14).

Many metabolic reactions involve the loss of a hydrogen atom; since this contains one proton and one electron, the reaction is regarded as an oxidation, because an electron has been lost:

The lactate in the example above, by losing two hydrogen atoms, has automatically lost two electrons and thus become oxidised to pyruvate. Oxidation reactions are

always associated with the transfer of energy from the oxidised substance to the reduced substance Two important molecules that we shall encounter a number of times in the following pages are the coenzymes nicotinamide adenine dinucleotide and nicotinamide adenine dinucleotide phosphate; you will be relieved to learn that they are nearly always referred to by their abbreviations, NAD+ and NADP+ , respectively! Both are derivatives of the B vitamin niacin, and each can exist in an oxidised and a reduced form:

They are to be found associated with redox reactions, acting as carrier molecules for the transfer of electrons. In the oxidation of lactate shown above, the oxidising power is provided by the reduction of NAD+ , so the full story would be:

As the lactate is oxidised, so the NAD+ in the coupled reaction is reduced. It is said to act as the electron acceptor. NAD+ /NADH is generally involved in catabolic reactions, and NADP+ /NADPH in anabolic ones.

As the equation above shows, there can be no oxidation without reduction, and vice versa; the two are irrevocably linked. The tendency of an compound to lose or gain electrons is termed its redox potential (Eo).

In the following section, we shall examine chemoheterotrophic metabolism, used by the majority of microorganisms to derive cellular energy from the oxidation of carbo-hydrates. Other groups have evolved their own systems of energy capture, and these will be considered later.

Figure 6.15 provides a summary of the catabolic (breakdown) pathways used by heterotrophs. Complex nutrients such as proteins and polysaccharides must be enzymatically broken down and converted to substances that can then enter one of the degradative pathways that lead to energy production.

Glucose is the carbohydrate most widely used as an energy source by cells, and the processes by which it is broken down in the presence of oxygen to give carbon dioxide and water are common to many organisms. These have been very thoroughly studied and can be summarised: 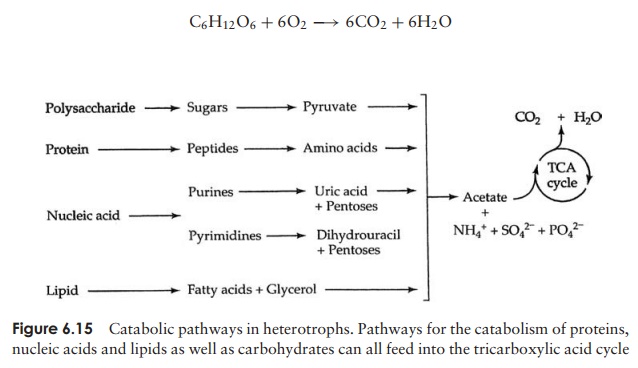 What this equation, crucially, does not show is that as a result of this process, energy is released, and stored in the form of 38 molecules of ATP, so for completeness, we need to add to the respective sides:

The release of the energy contained within a molecule of glucose does not occur in a sin-gle reaction, but happens gradually, as the result of numerous reactions linked together in biochemical pathways, the first of which is glycolysis (Figure 6.16). Glycolysis can occur with or without oxygen, and is common to both aerobic and anaerobic organ-isms. Oxygen is essential, however, for aerobic respiration, by which ATP is generated from the products of glycolysis. Anaerobes proceed down their own pathways follow-ing glycolysis as we shall see, but these lack the ATP-generating power of the aerobic process. 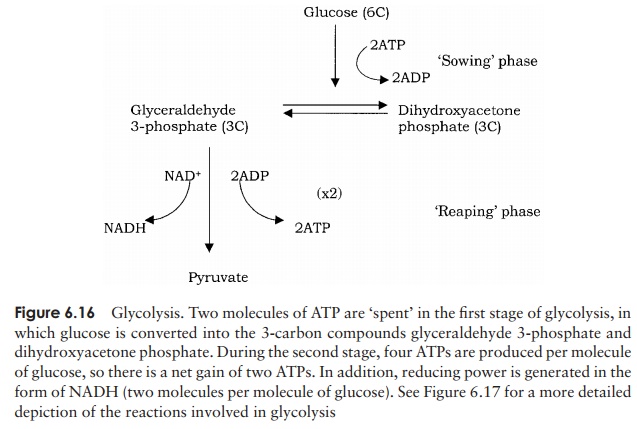 By concentrating on glucose catabolism in this way, you may think we are ignoring the fate of other nutrient molecules. If you take another look at Figure 6.15, however, you will notice that the breakdown products of lipids, proteins and nucleic acids also find their way into our pathway sooner or later, having undergone transformations of their own.