Photosynthesis as carried out in the purple and green bacteria is different to the process just described in a number of respects.

Photosynthesis as carried out in the purple and green bacteria is different to the process just described in a number of respects. Some of the main differences are summarised below:

·              no oxygen is generated during this type of photosynthesis, and the bacteria involved are growing anaerobically

·              bacteriochlophylls absorb light maximally at longer wavelengths than chlorophyll a and b, allowing them more effectively to utilise the light available in their own particular habitat

·              purple and green bacteria are not able to utilise water as a donor of electrons, and must instead use a compound that is oxidised more easily, such as hydrogen sulphide or succinate

·              only a single photosystem is involved in the light reactions of anoxygenic photosynthesis. In the green bacteria this is similar to photosystem I, while in the purples it more closely resembles photosystem II

·              thylakoid membranes are not found in the green and purple bacteria; light reactions take place in lamellar invaginations of the cytoplasmic membrane in the purples and in vesicles called chlorosomes in the greens. 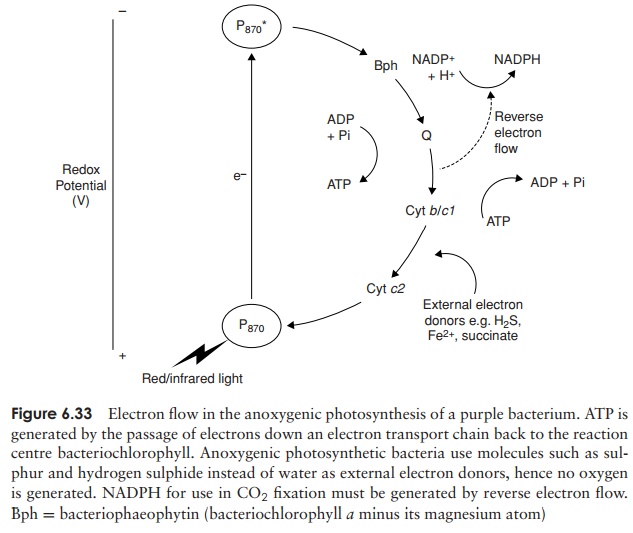 In the generation of ATP, a form of cyclic photophosporylation is employed; the bac-teriochlorophyll acts as both donor and acceptor of electrons (Figure 6.33). In order to generate reducing power in the form of reduced coenzymes, an external electron source is necessary, since this process is non-cyclic. In the green and purple sulphur bacteria, this role is served by sulphur or reduced sulphur compounds such as sulphide or thiosulphate. The non-sulphur bacteria utilise an organic molecule such as succi-nate as an electron donor. In some cases, the electron donor has a more positive redox potential than the NADP+ , so in order to reduce the coenzyme, electrons would have to flow against the electrochemical gradient. An input of energy in the form of ATP is needed to make this possible, in a process known as reverse electron flow. This also happens in many chemolithotrophs such as Acidithiobacillus and Nitrobacter. Table 6.4 compares the different groups of anoxygenic photosynthesisers. A special form of anoxygenic photosynthesis occurs in the Heliobacteria; these carry out photoheterotrophy using a unique form of bacteriochlorophyll called bacteriochloro-phyll b. They are unable to use carbon dioxide as a carbon source.